The museum of civil aviation in Ulyanovsk is one the largest aviation museums in Russia. It contains over 9000 exhibits including hundreds of originals. 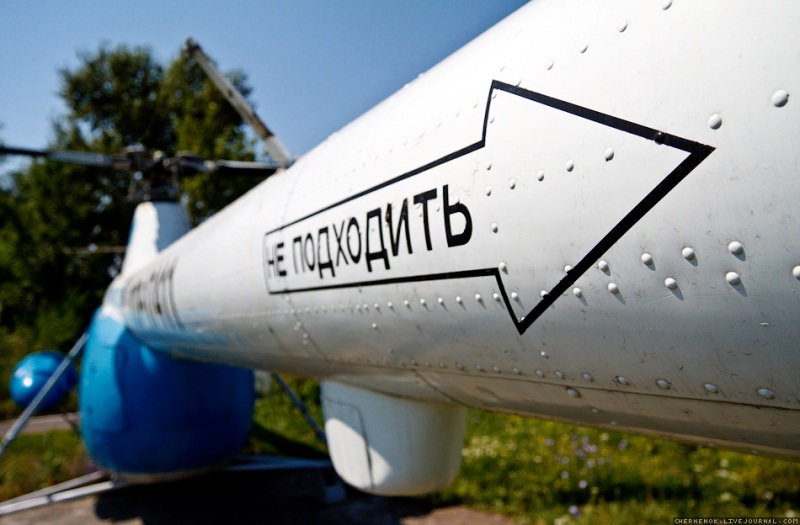 The Antonov An-14 Pchelka (“Little Bee”) was a Soviet utility aircraft which was first flown on 15 March 1958. It is one of the most interesting and beautiful machines among other Soviet light aircrafts. With very stable flight characteristics, the An-14 could be flown by anyone after a few hours of basic training. A small number of An-14 are still in airworthy condition. Serial production started in 1966, and about 340 examples were built by the time production ended in 1972. An-14 couldn’t replace a more modern model of An-2. An-28 and An-38 were later modifications of the plane. The Antonov An-24  is a 44-seat twin turboprop transport designed and manufactured in the Soviet Union by the Antonov Design Bureau from 1957. Flying range is 3000 km, course speed is 490 km an hour, maximum take-off mass is 21 tons. Over 1000 of the airplanes were produced and 300 machines are exploited today. By the 6th of September 149 An-24 planes were lost in the result of accidents, and 2034 of people died. One serious accident occurred on August 8, 2011 in Blagoveshchensk city when a plane landed 200 meters away from the flight strip because of the storm. 10 passengers got severe traumas. The machine is not subject to restoration. M-15 is an agricultural aircraft that was developed in Poland in 1970 following the order of the USSR. The Let L-410 Turbolet is a twin-engined short-range transport aircraft, manufactured by the Czech aircraft manufacturer LET, mostly used for passenger transport. Since 1969 more than 1100 airframes have been produced. The Mi-1 was a Soviet three- or four-seat light utility helicopter. It was the first Soviet helicopter to enter serial production. It is powered by one 575 hp Ivchenko AI-26V radial. It entered service in 1950 and was first seen on the 1951 Soviet Aviation Day, Tushino and was produced for 16 years. More than 1,000 were built in the USSR and 1,594 in Poland, as SM-1. The Mi-8  is a medium twin-turbine transport helicopter that can also act as a gunship. The Mi-8 is the world’s most-produced helicopter, and is used by over 50 countries. Russia is the largest operator of the Mi-8/Mi-17 helicopter. One hour spent by the plane in the air costs around 1000 US dollars. The Mi-4 was a Soviet transport helicopter that served in both military and civilian roles. The plane was exported to 30 countries of the world. The Ilyushin Il-62 (NATO reporting name Classic) is a Soviet long-range jet airliner conceived in 1960 by Ilyushin. The first flight was made in 1963. 277 of such planes were produced in total. The last but one machine was ordered by Sudan in 2004 whereas the last model was built in 2009 for the Russian Ministry of Defense. The Mi-2  is a small, lightly armored transport helicopter that could also provide close air support when armed with 57 mm rockets and a 23 mm cannon. The Mi-6  was a Soviet/Russian heavy transport helicopter designed by the Mil design bureau and built in large numbers for both military and civil roles. The Ilyushin Il-18  is a large turboprop airliner that became one of the best known Soviet aircraft of its era as well as one of the most popular and durable, having first flown in 1957 and still in use over 50 years later. ANT-4 was a Soviet bombardment aircraft that was built in 1925. The Tupolev Tu-124 was a 56 passenger short range twinjet airliner built in the Soviet Union. It was the world’s first turbofan-powered airliner. The Tu-116 was a modification of the Tu-95. A bombardment aircraft was re-equipped into a passenger aircraft and used by the Soviet leaders. The only model left is now stored at the museum. 8 thoughts on “The Museum Of Civil Aviation In Ulyanovsk”