Hunting and politics. Nikolay II’s hunting was similar to slaughter, Stalin set traps to catch Arctic foxes, Brezhnev struck his head against rifle buttstock. Some Russian politicians being at hunting. The last picture of Alexander III inter vivos (2nd to the right in the middle row). Stalin with a hunting rifle.

Stalin didn’t like hunting thus he differed  from Lenin and Voroshilov who were fond of hunting. Maybe this traditionally Russian activity (the same as fishing) reminded him about Turuhuanskaya exile of 1913. In the beginning of 1914 he was sent to Kureyka (the very polar circle) in order not to escape (he tried 5 times before) where he used to hunt and fish in order to have food. He hunted all the year round though he had no rifle (it was forbidden for exiles). According to the local people if someone left the rifle in the forest and Stalin had heard about it he immediately went hunting using this rifle. He also used traps and nooses. Stalin hunted ermines, hares and different birds. If he had got furs he sold it to local merchants and used gained money to buy food. At Politburo meetings statesmen used to “chat” about hunting. For example on September 20, 1928 right at the meeting nefore Stalin Voroshilov and Tomskiy gave notes to each other where they talked about gunpowder they were using while hunting. Tomskiy asked Voroshilov where did he buy smokeless powder. There are a lot of such notes in the Kliment Voroshilov personal archieve. In January, 1964 Nikita Khrushchev and Fidel Castro went hunting together at Zalesje place (a hunting ground near Kiev). The hunting went like a bomb. Khrushchev killed 2 wild boars, 2 he-goats and 4 hares. Castro – a deer, 2 he-goats and a boar. Khrushchev was the first Central Committee of the Communist Party of the Soviet Union chairman who claimed to be the best at hunting. Impulsive leader hated to be a looser. So one day of 1959 statesmen went hunting in Zavidovo. They were waiting the boar to run and then everyone heard 2 shots. The boar was killed. Having gathered together Khrushchev and vice-chairman Kirilenko began to argue who had killed the boar. It turned out that 2 men hit it at the same time but Khrushchev’s bullet was the first to kill the target. It hit the boar in the eye while Kirilenko’s bullet went through shoulder-blade (it only injured the animal). After this situation both men didn’t speak to each other. Zavidovo and other hunting grounds where Khrushchev liked to hunt ironically were the place of many conspirancies against him. A few days before October plenary session of 1964 where Khrushchev was overthrown, Gennady Voronov the chairmen of the Government of the Russian Soviet Federative Socialist Republic got an invitation to go hunting in Zavidovo from Brezhnev. Later Voronov wrote that after immensely short feast Andropov offered him to go to Moscow in Brezhnev’s car. It was there in the car where Andropov told Voronov about Khrushchev’s imminent overthrow. Khrushchev (in front) and Castro at hunting. 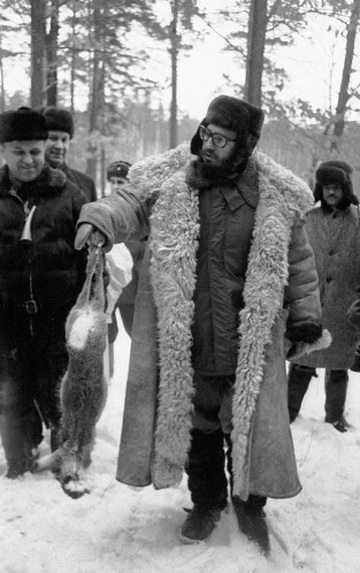 The leader of Cuban revolution. Khrushchev (in the center) and Josip Broz Tito. Leonid Brezhnev was a real fan of hunting. In that time inability to hunt was considered as a bad form. Brezhnev itself hunted from early spring till autumn (mainly in Zavidovo). It is said that he was extremely good at shooting and knew what’s what in rifles. He had got about 90 hunting rifles for different animals and birds. They were kept in a special room in 3 locked boxes in Zarechje dacha. Many of them he got as presents… very expensive presents. 3 or 4 smooth-bore rifles of foreign manufacture for duck, goose, hare, fox and other small animal hunting were his favourite. And the same number of guns for big targets – boars, elks, deers. One day Brezhnev hit a huge boar. The lifeless carcass fell on the ground. As usual happy Brezhnev was coming closer to check the animal. But in 20 metres of the boar suddenly it stood up and ran in the line of Brezhnev. The huntsman reacted quickly. He took 2 shots from carabine but missed. The boar killed the huntsman Gennady Fedotov and ran away. This happened before Brezhnev’s eyes. As they say he left indifferent. The injured boar wasn’t found though there were much effort. In the late 70s weak Brezhnev wasn’t able to hold the rifle. But he couldn’t refuse hunting. He didn’t want to be considered too old for this activity. While the shooting the rifle hit his nose, eye or brow. Thus he often had bruises and wounds, sometimes very serious. Once at the hunting he hit his brow on the first day and nose – on the next day. The problem was that he had to visit Prague and Bratislava in a few days. Several times a day during the whole trip doctors hid his bruises and this was a real “headache”.  After this incident Brezhnev understood that he wasn’t a shooter anymore. But he didn’t finish with hunting. He still attended all the hunting events but didn’t shoot.