A unique Cathedral of Virgin Mary of Kazan is located next to Volokolamsk. The place is abandoned now and protected by the state meaning that no protection is actually available and access is free. 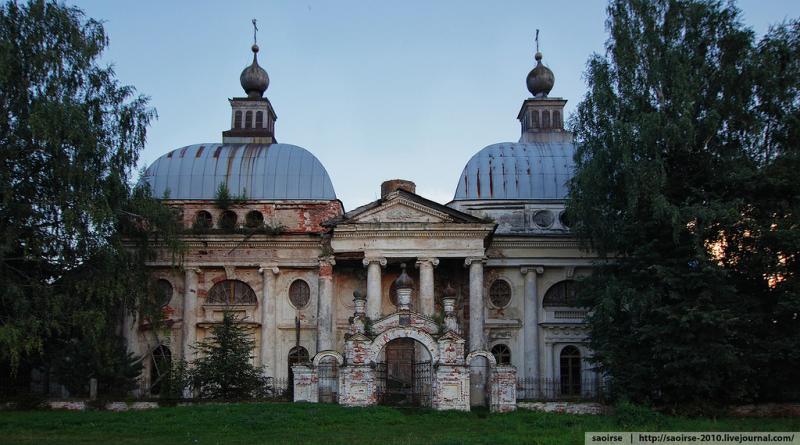 The Cathedral was constructed in 1780 in front of the gates of Count Chernyshov’s estate and was intended to be both a church and a table tomb for the Count’s family. Its construction was over in 1797. That is what the front of the building should have looked like in accordance with the remaining drawings. The drawing wasn’t final as the domes were of another shape and the statues were not mounted. The gates were constructed in the end of the 19th century. Do you see the mark FDC on the gates? That is how descendants worship their cultural heritage. ‘The monument of architecture is protected by the state’. Somebody added: ‘The state is poor’. The eye of providence has been depicted on the upper part of a church since the end of the 18th century. Construction of the bell tower started in 1839 and was almost over in 1869.

The eastern part of the Cathedral contained a church whereas the western one embraced a table-tomb. Why do people have to spoil the walls of the Cathedral? The picture was made in the beginning of the 20th century. Almost every column is damaged. Some of them are substituted by supports that don’t let the upper part of the building fall down. Do you see the hole in the floor? A tomb was located under the Cathedral. The Cathedral survived the hurricane of 1917 and bombardment that took place during World War II. But will it survive indifference of people to their history? 7 thoughts on “Destruction Of An Ancient Cathedral In Volokolamsk”