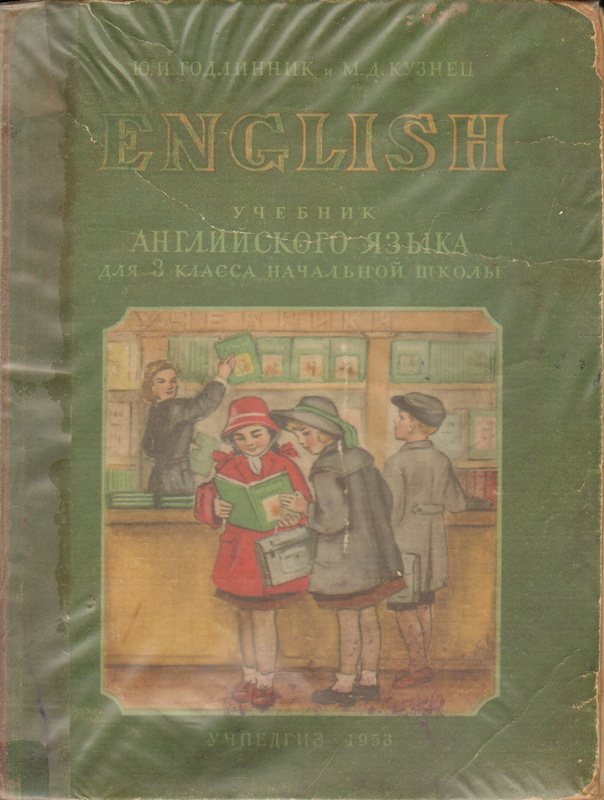 This is an English language textbook for third graders. It was released in 1953, so it contains a lot of characteristic features of that time. Take a look! First of all, it reflects the fact that some schools practiced separate education for boys and girls, which was introduced in 1943 in Moscow, Leningrad and some other big cities of the USSR. On the whole, the reform affected just 2% of the schools of the USSR.

In the picture: boys’ class. ‘Comparing the two systems of education, it should be noted that separate education has no advantages in terms of pedagogical process, however there are difficulties in behavioral aspects’. So, in 1954-1955 they brought the combined education system back.

In the picture: girls’ class. Girls and boys met only in the House of Pioneers. The textbook shows the school uniform they wore back then.

In the picture: girls’ uniform. This kind of school uniform has been in use up to 1962.

In the picture: boys’ uniform. These are some variants of boys’ everyday outfit. The textbook also shows everyday life of the Soviet citizens living in the 50s. You will find no picture of a kitchen in this textbook, so apparently these interiors are rooms in communal flats.

But there are plenty of pictures of stoves. Pretty exotic for today’s city life. This bus looks more like a tram… who knows.

Another bus going along a street in Leningrad. They depict trams going along Nevsky Avenue which is strange because the tram road was removed from there in 1950-1951. Pioneer girls are marching somewhere in Leningrad too. Of course, no book could do without Great Leader Comrade Stalin.