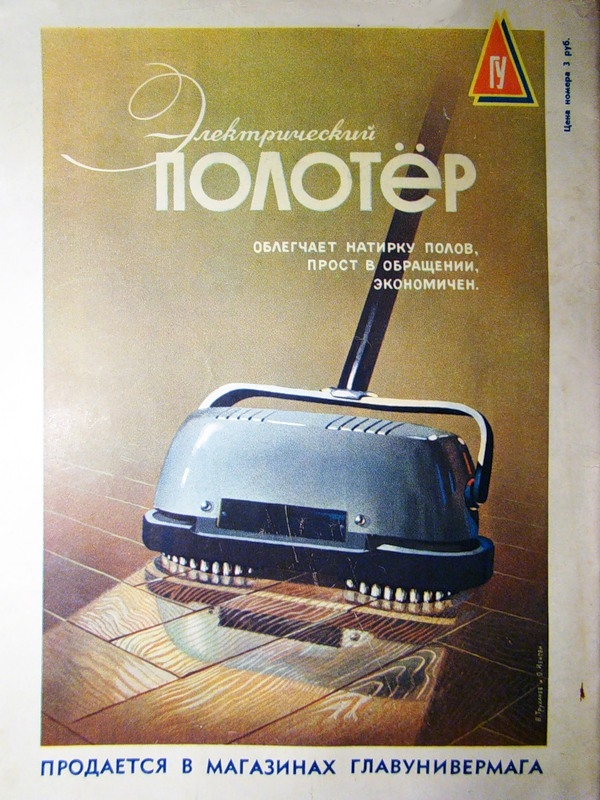 Today’s importunate advertisements have become an integral part of our life. In Soviet time they also exited, however in a different form. Let’s take a look at the Soviet ads of the post war time (1948-1954). Apart from wall and street posters, the magazines of that time had a lot of ads too. They advertised domestic appliences, food, cosmetics, tourist services, and banking services. It should be noted here, that their design was none the worse than that in the USA. For example, ‘Ogonyok’ magazine (1948) pushed this electro-floor-washer saying it was easy to use, efficient and relly ‘helpful in cleaning’. People could find it in the central department store. ‘Ogonyok’, 1950: the advertisement of caviar (soft, pressed, and pasteurized). It says, ‘caviar is packaged into hermetically sealed 28, 56, 84 and 112 gram glass pots and can be preserved for a long time at the room temperature’. Green peas. The advertisement explains that it is ‘great for calads, and as the best side dish for meat and fish courses’. ‘Ogonyok’, 1951: tooth powder advertisement. Its producer has chosen the following slogan: clean teeth guarantee that you will have good health! ‘Rabotnitsa’ magazine, 1952: children’s tooth powder. Another slogan is as following: healthy teeth guarantee that you will have good health! ‘Ogonyok’ 1950, banking services advertisement: it was about bonds of course. The man says, ‘It is profitable both for me and for the state!’ ‘Rabotnitsa’, 1952: bankbooks advertisement runs that ‘you can collect money for buying different things in the savings bank’. Bonds advertisement. In the upper left corner: government stocks favour the further development of National economy of the USSR. And in red: buy 3% state premium bonds! Tourist services ads were rare. They offered only national resorts. In the picture: Ritsa Lake advertisement. It says: a new first class hotel has opened at Ritsa Lake, 60 kilometers away from Gagra . It provides its clients with cozy rooms, a restaurant, a cafe, taxi cabs, buses, and boats. At Lake Ritsa (also in Gagra, Sukhumi and Mysser), there are holiday houses for those who come by car. ‘Ogonyok’, 1954: refrigerators advertisement. ‘Made in Saratov!’ They say that these fridges had worked well up to the ‘Perestroyka’!