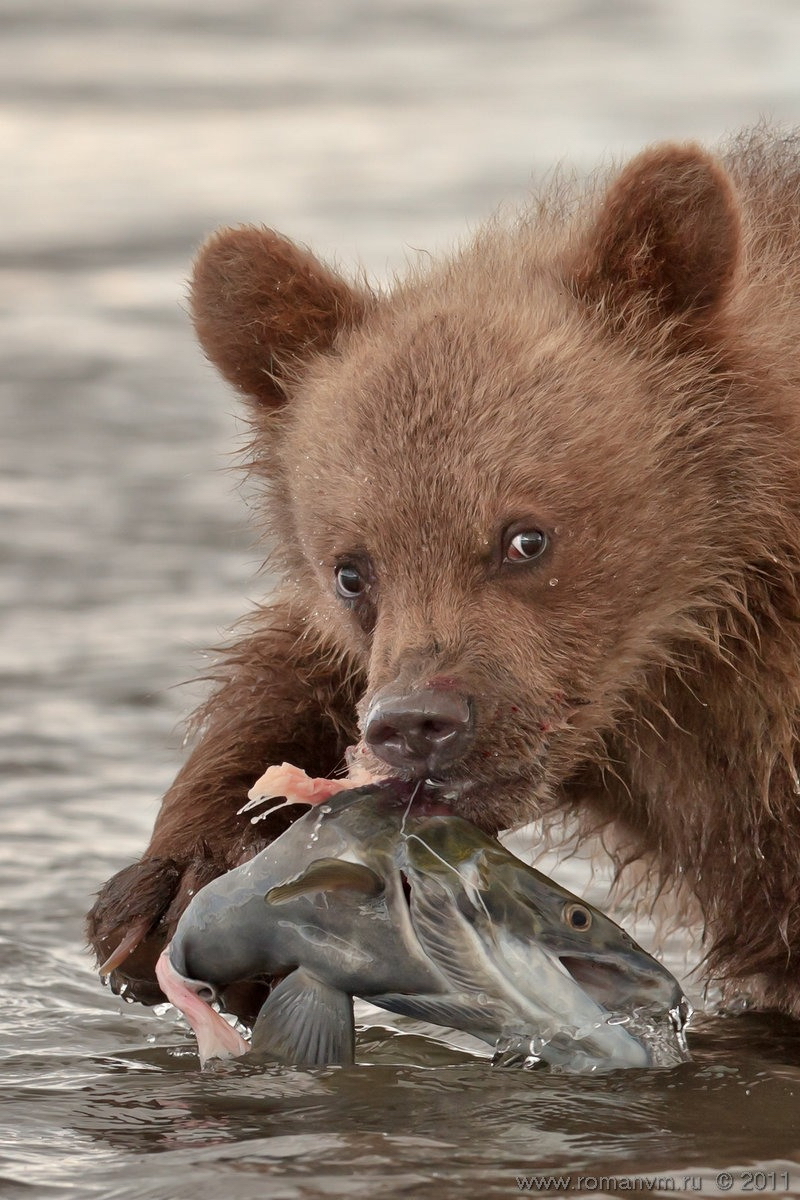 Kurile Lake is one of the most beautiful places on Earth. It is the second largest fresh water lake in Kamchatka. Its surface area is 76.2 square kilometers (12.5 kilometers long and 8 kilometers wide). Kurile Lake was formed 8300-8400 years ago by a large volcanic explosion and a collapse of the Earth crust. The lake has an average depth of 176 meters, and a maximum depth of 306 meters. The only river that takes off from this lake is the Ozyornaya river which connects it with the Sea of Okhotsk. The great spawning migration of blueback salmon lasts from July till February, attracting many animals and birds: bears, Steller’s sea eagles, foxes, sea gulls, ducks, swans, etc.

Ilyinsky Volcano is located on the northeast shore of the lake; it is active. It has a shape of a cone and a hight of 1578 meters. Its base diameter is 8 kilometers. It was formed about 8500 years ago; the last volcanic explosion was in 1901. There are hot thermal springs at the foot of the volcano (the Kurile springs), which temperature may reach 45 degrees Celsius. The springs make the water of the lake warm and don’t let it freeze in winter. 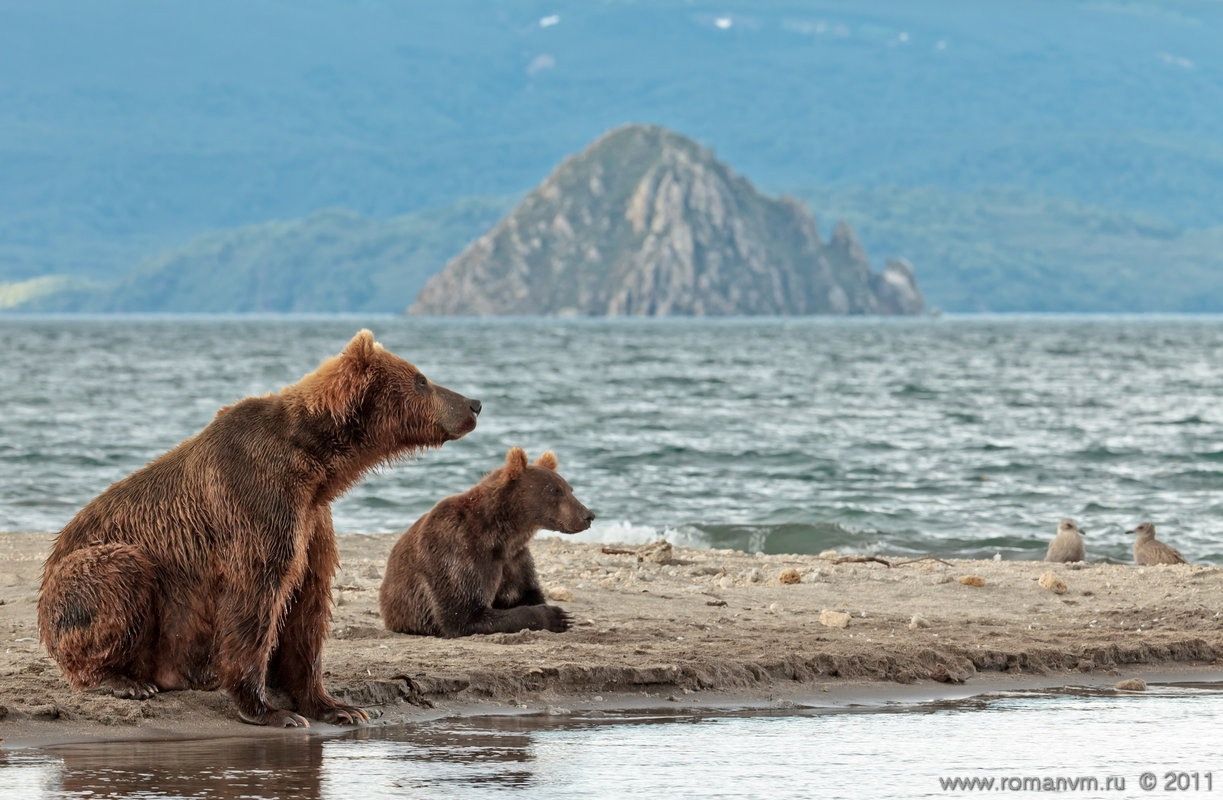 Blueback salmon is in the lake already. But the bears are waiting for it to head into the rivers flowing in the lake, because it’s easy to catch it there. 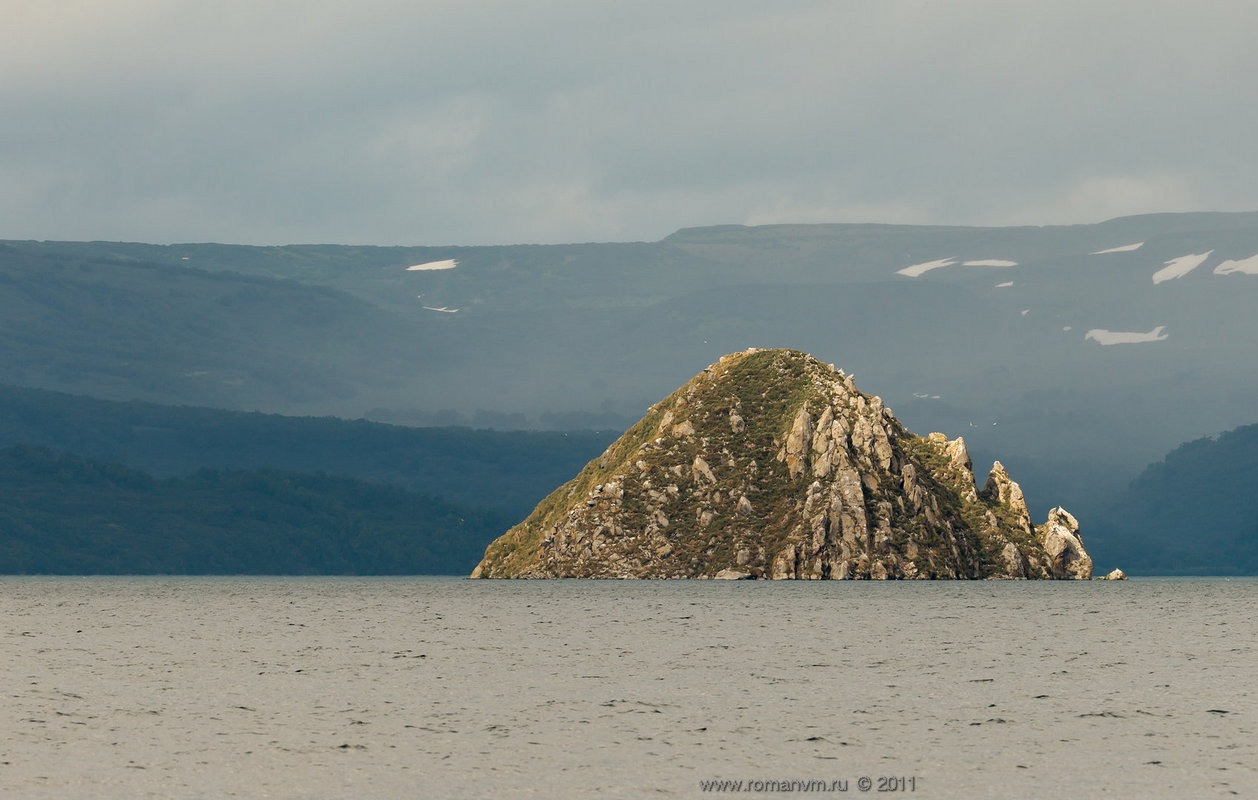 The legend about Alaid’s Heart Island runs that instead of the lake, there was a huge mountain called Alaid. It was so high that it was standing in the light of the rest of the mountains which they didn’t like. One day Alaid, tired of quarrelling, left  to find a better place to stay. The only thing he left there, was his heart which one can see in the middle of the lake. It is a rose-tinted island which has a form of the heart. 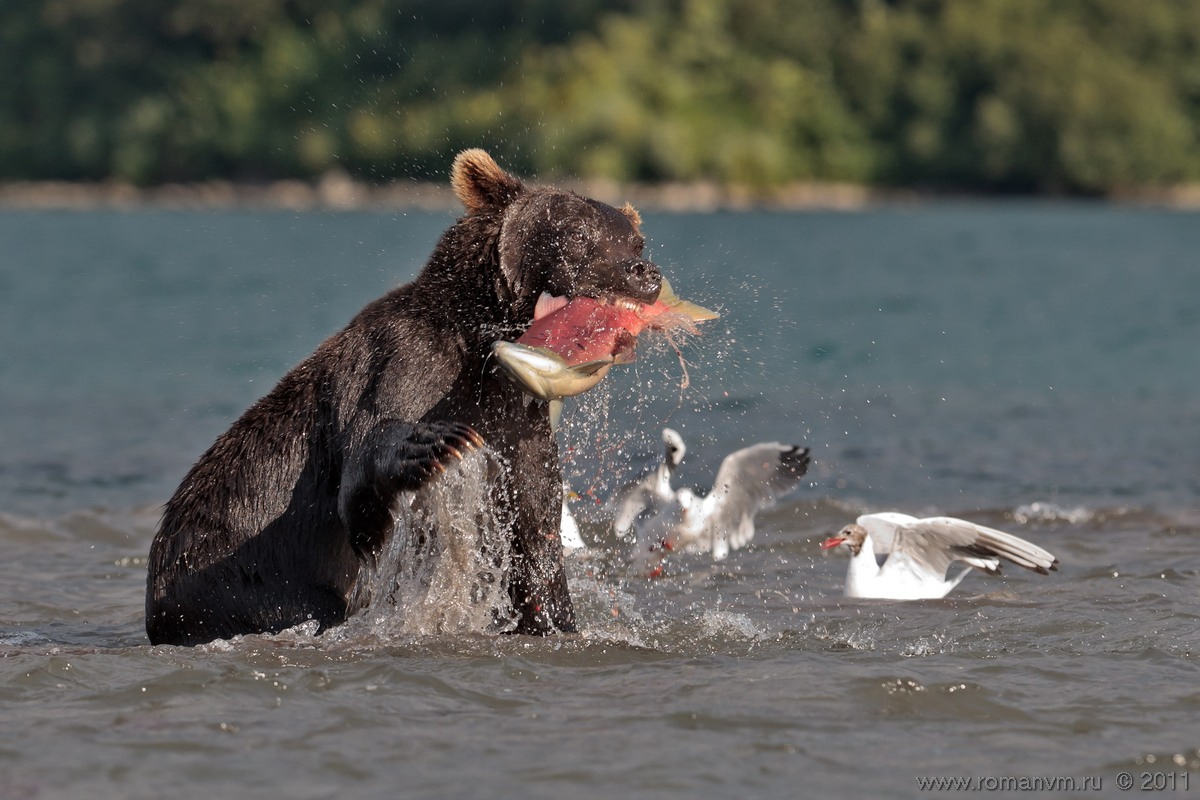 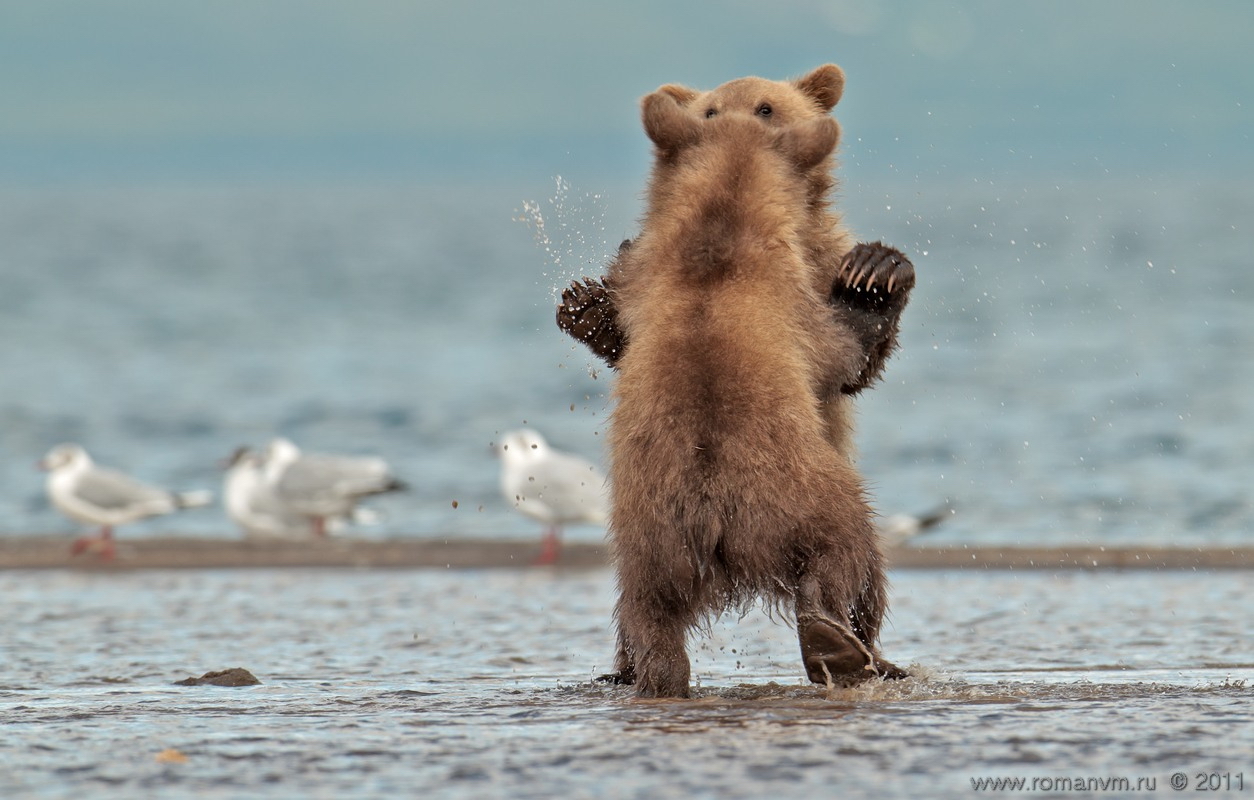 These cute little bears just saw that their mother had caught a fish for them. They are so happy that they threw themselves into a dance! 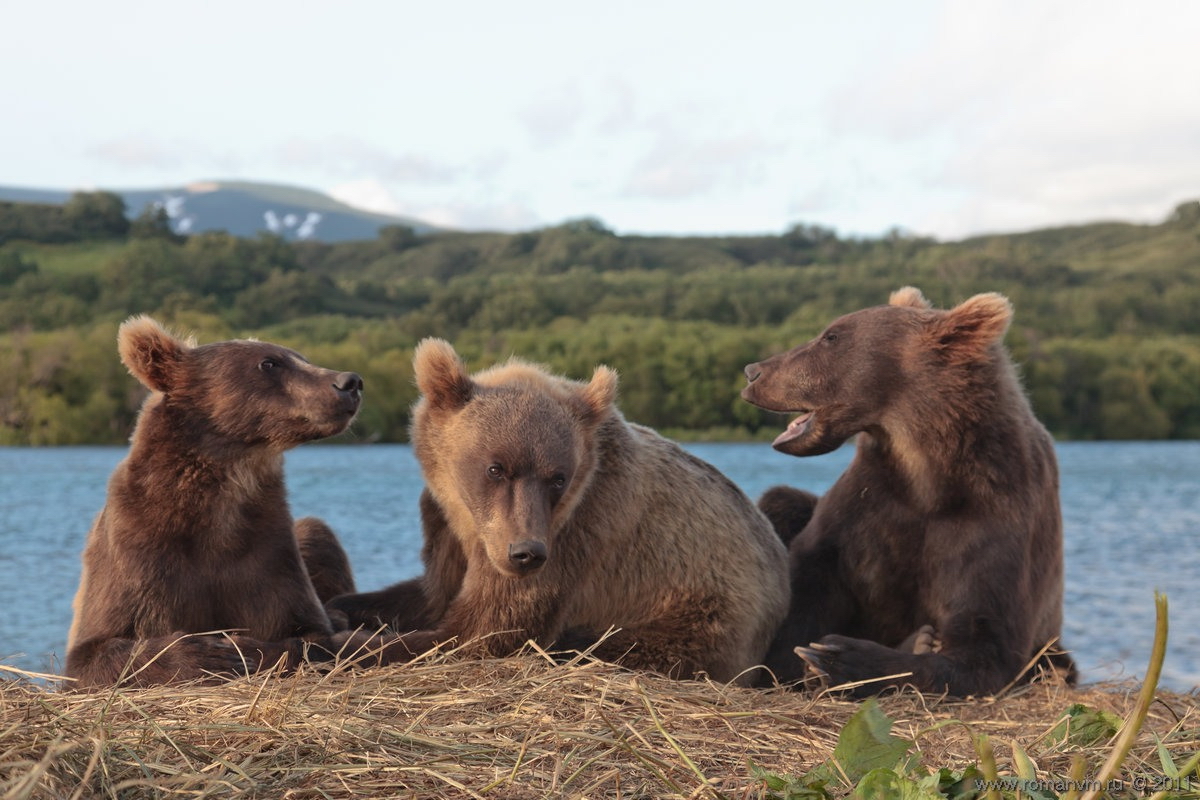 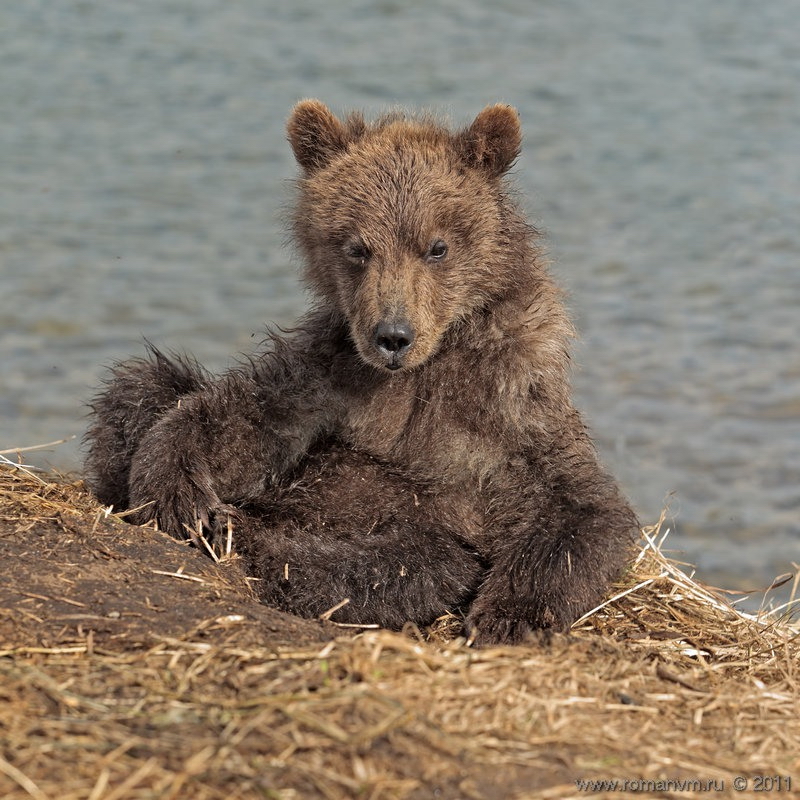 This funny little bear is getting ready for another fish! 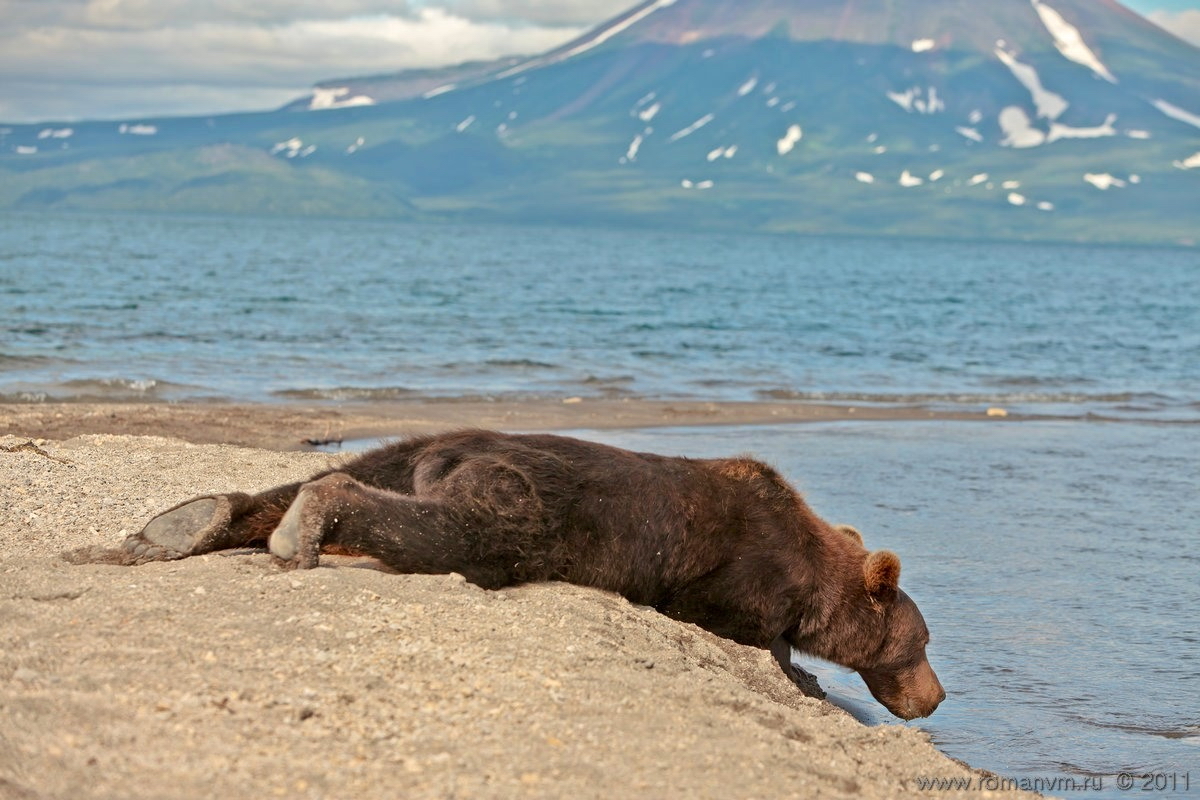 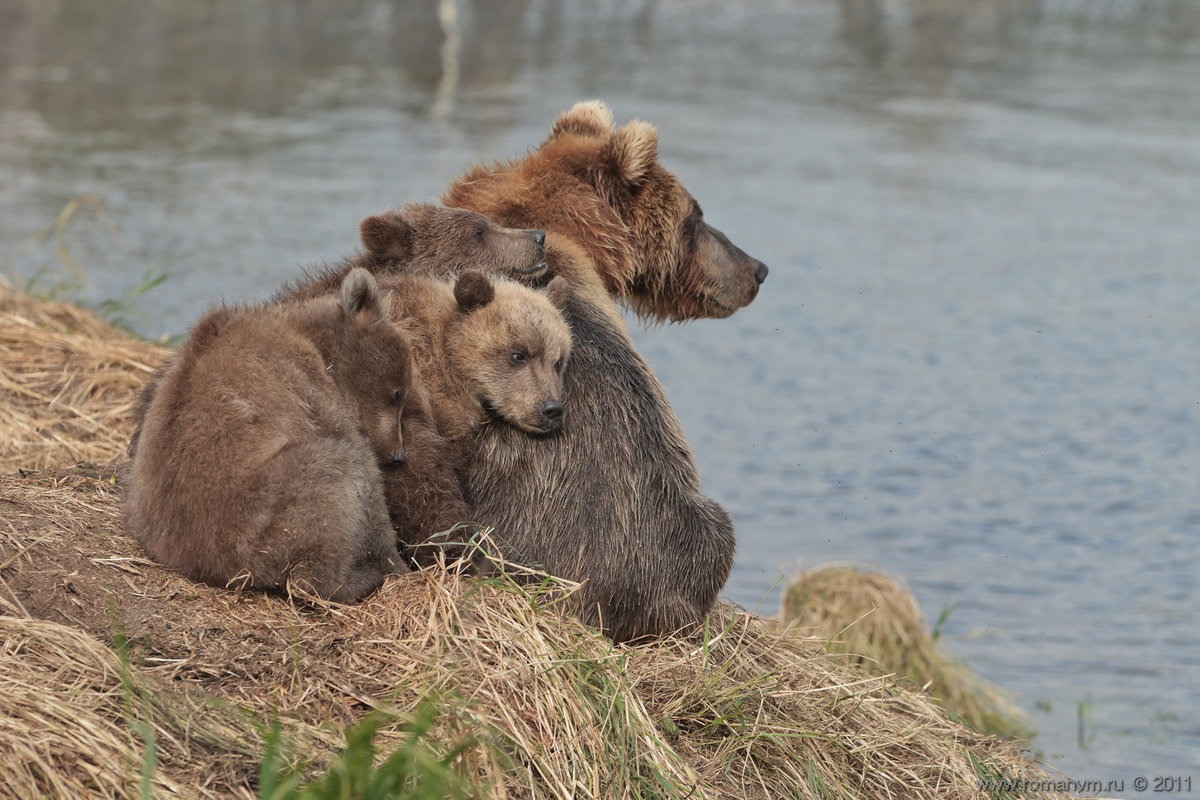 This mother-bear decided to have some rest at the shore, but her attention was still riveted on the river with fish.  The cubs had been dozing on their mom for some time, till she saw a fish and rushed into the water to catch it. The little ones rolled down into the water as well. 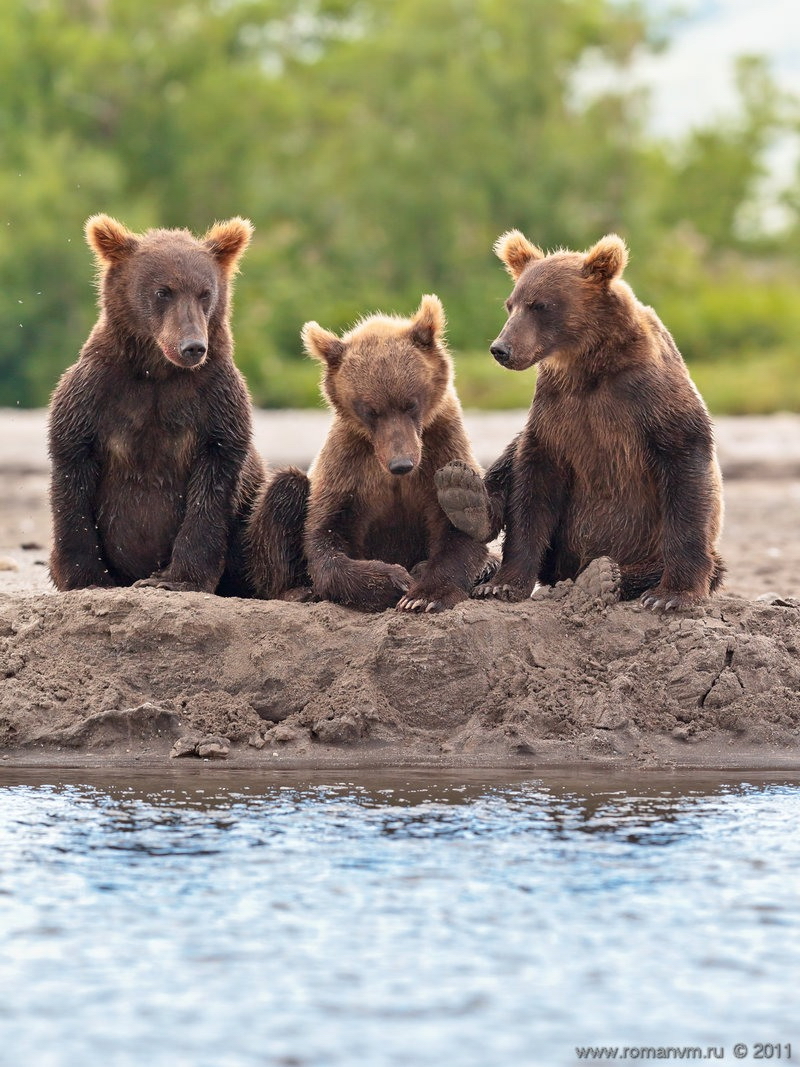 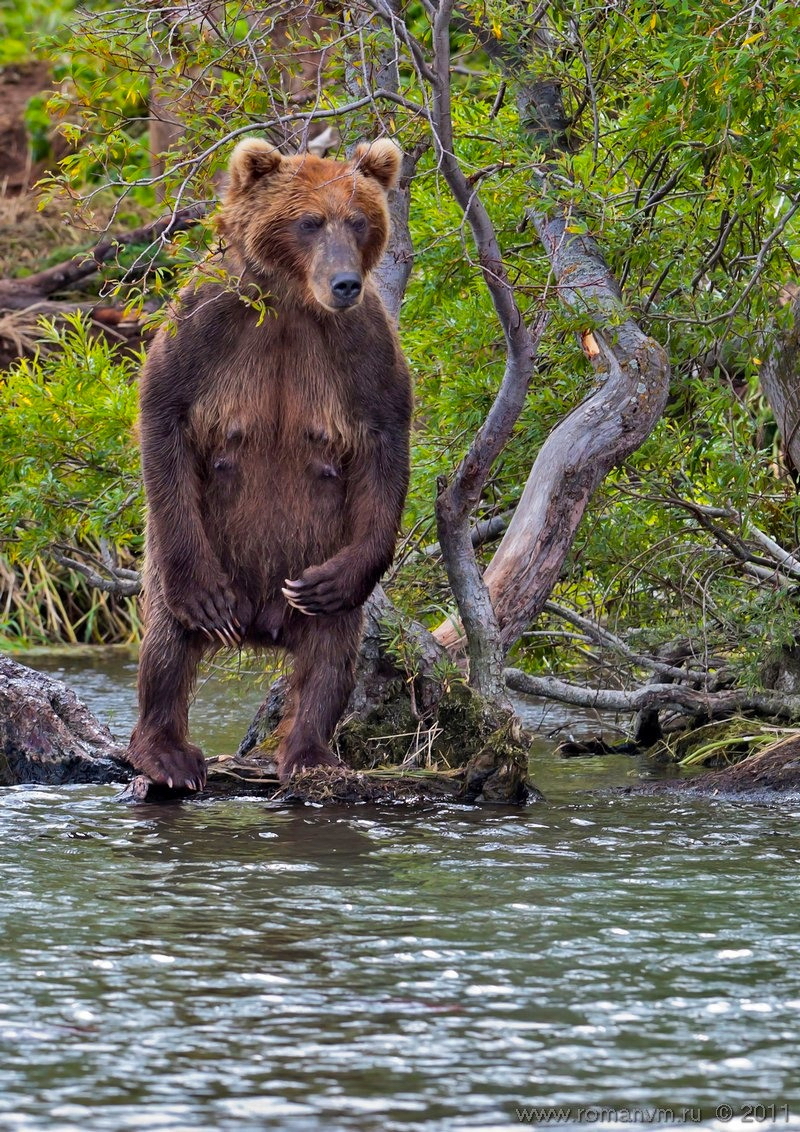 This female bear would ramp from time to time to see a fish. Once she noticed one, she would rush into the water and get it. 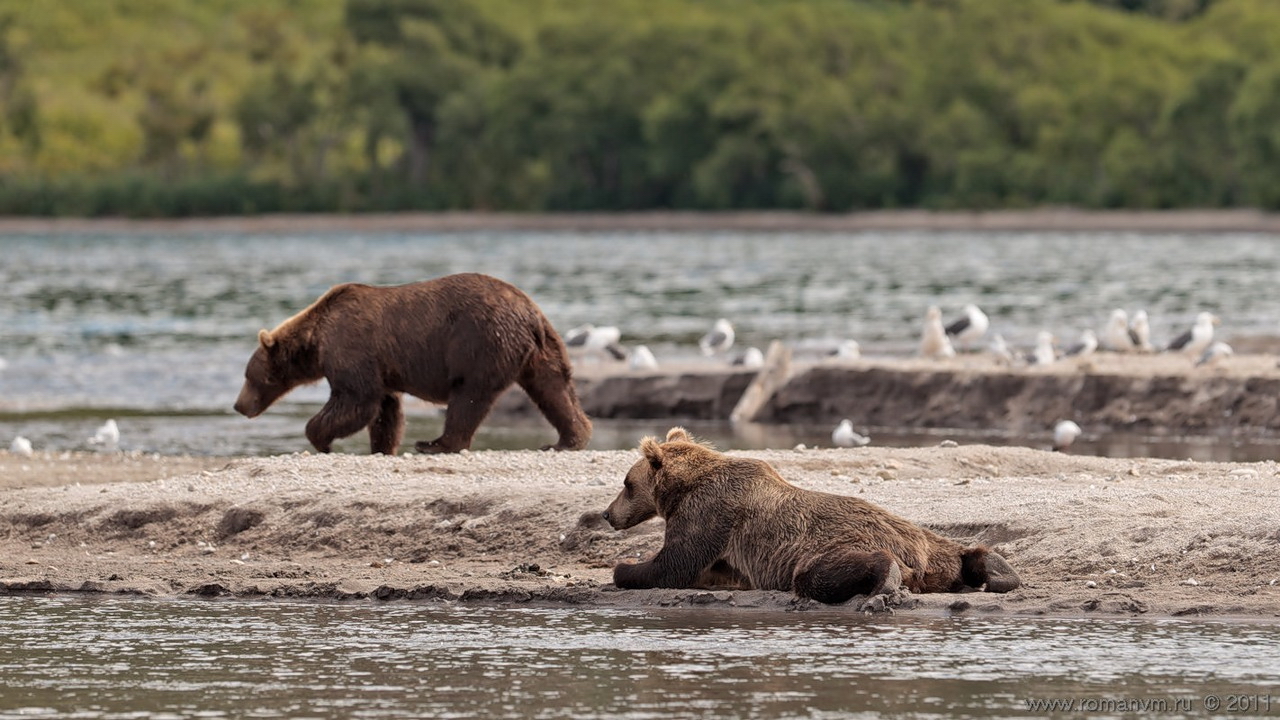 The first fish is caught! 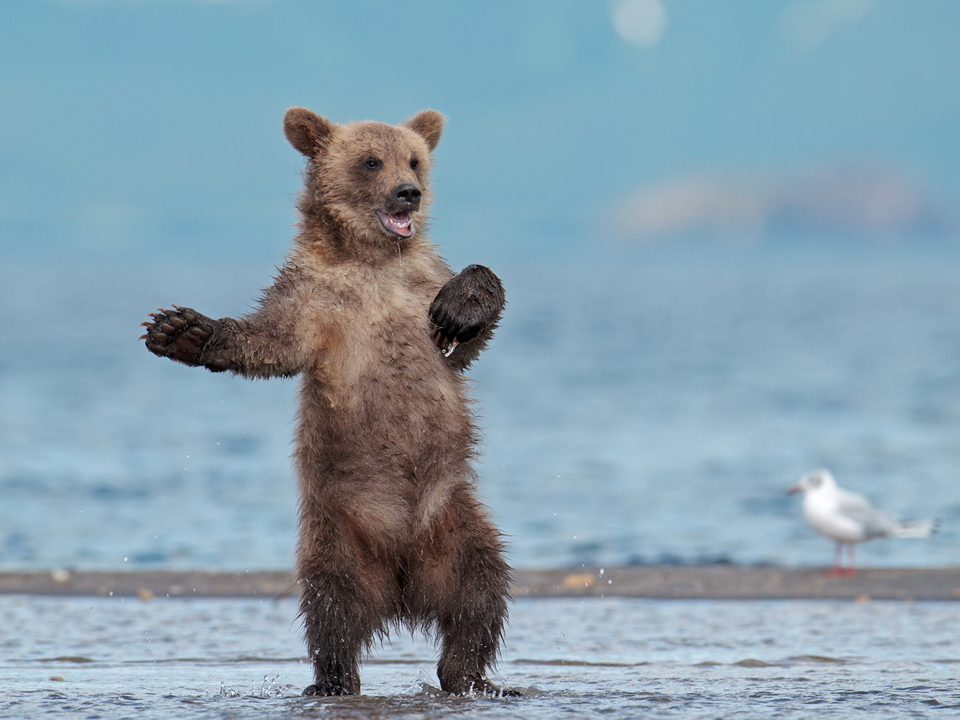 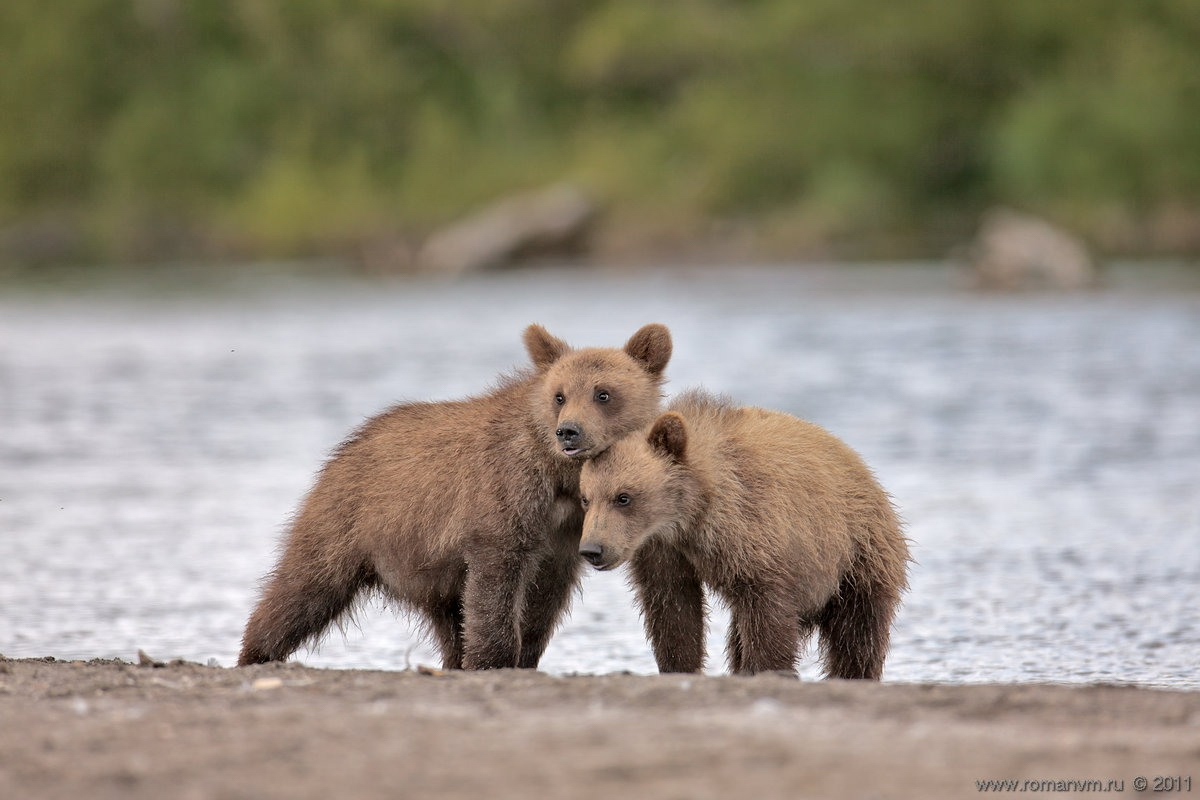 Kutkhini Bati are pumiceous rocks near Kurile Lake. They resemble huge boats, and covered with thick greenery.  They are situated in an amphitheatre-canyon of the rock. A legend says that God Kutkh used to live here. He would take to the sea or lake by his boats to fish. Before leaving forever, he wanted to dry them… and they turned to stone.

13 thoughts on “Kamchatka And Its Bears. Photos By Roman Murushkin”