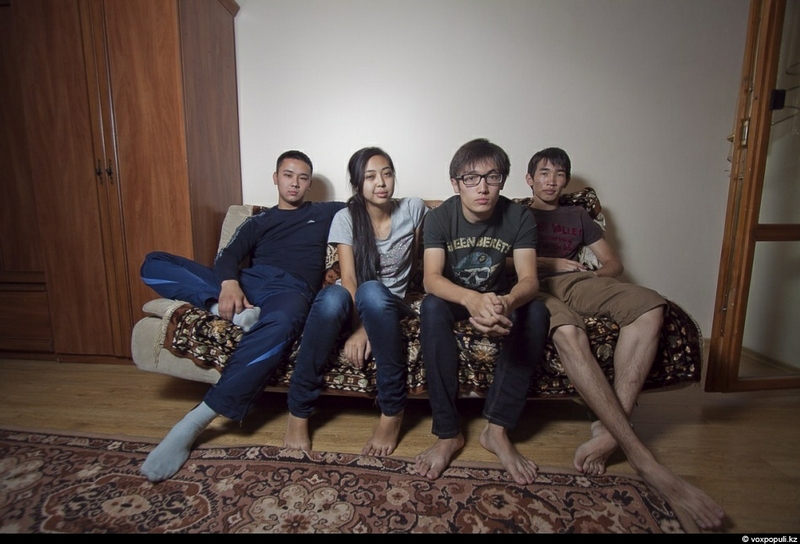 Almaty is considered to be one of the most important student cities of Kazakhstan. There are more than 50 universities and colleges there, let alone  technical schools. Naturally, a great part of its people is students. Those who come to this city to hit the books, constitute another part of its population. Where does an average non-resident student live and what is his/her living expenses in Almaty? The majority of newly arrived students do not expect to get a room in a hostel in Almaty. That’s why they begin their school year with a search of lodging. One can see crowds of young people at the intersection of Makataev Street and Kunaev Street. Locals call this intersection a patch, or ‘zhetim burish’ in Kazakh, which means ‘the corner of the orphan’. Students from Almaty save at least 4-5 thousand dollars a year, while non-residents have to rent a room or an apartment, or sometimes even a worker hut, for 100-800 dollars a month. Since for a lot of students or, to be more precise, for their parents, personal rent is beyond their pockets, young people have to unite in groups to pay less. In this case however, they face another problem: they have to persuade the owner of the apartment to let them live all together. Owners are usually not willing to do that, because such apartments  quickly get shabby, not mentioning the complaints of the neighbours. Students, in turn, put their own demands concerning the apartment: it should have a washing machine, a fridge, and a microwave oven. These students have come from Aktau. They received a college grant and now they are studying at different universities. They rent a two-room apartment at the intersection of Auezov Street and Kurmangazi Street. Their rent is 800 dollars a month total. Daily they spend 2000 tenges each, or 100 000 tenges a month. Those students who have relatives in Almaty, are easier to live. Sophomore Kanat Rimtaev was also given a college grant and is living with his sister in her communal flat. He has no travel expenses because he rides a bicycle. Nevertheless, he spends around 300 dollars a month for living expenses. Gaziz, Adil and Gumir live on campus. They study at Kazakhstan Institute of Management, Economics, and Strategic Research. Their yearly tuition cost is 6 700 dollars. Hostel charge is 180 000 tenges a year. Their monthly living expenses is about 60 000 tenges for each. Buirzhan and Askar, students of University of International Business, rent a one-room apartment for 400 dollars a month. Their annual tuition cost is 500 000 tenges. Buirzhan works up some money in a show. Meanwhile, the kitchen and the bathroom are united in this apartment. So, there is nothing unusual for them in the fact, that one of them is having lunch, while the other is taking a shower. These are two sisters, Sania and Madina. They are from Taraz. They study at Riskulov Kazakh Economic State University. Sania has a college grant, while Madina’s annual tuition cost is 360 000 tenges.  They rent a one-room apartment for 400 dollars a month. Their parents provide them with food. These are students of Kazakhstan Institute of Management, Economics, and Strategic Research. They rent a four-room apartment for 800 dollars a month plus household running costs. Each of them pays rent of 180 dollars a month. Not every university or college has its own hostel. And when it does have one, it is usually overcrowded. Hostels may differ from each other. For example, they have just rebuilt the buildings of Kazakhstan National University and purchased new furniture. Now, the rooms look like small apartments. Yearly rent is 23 000 tenges for each. Acel, Fariza, and Aysholpan are future dentists. They study at Kazakh National Medical University named after S. D. Asfendiyarov. Aysholpan has a college grant. Fariza and Acel’s yearly tuition cost is 570 000 tenges. Their everyday expenses are about 20 000 tenges; they share food expenses. Sophomores of the medical university, Farukh and Aziza, live in a hostel, because their parents cannot afford renting an apartment for them. Hostel charge is 20 000 tenges a year. There are students exchange programmes at universities of Kazakhstan. Usually they live in hostels. These are students from Slovenia, North Korea, and Denmark. They study at Kazakhstan Institute of Management, Economics, and Strategic Research. Their monthly hostel charge is 20 000 tenges. These two brothers (China) has been studying at Kazakh National University at the faculty of oriental studies for a year. They say, it’s less expensive to study in Almaty than in Pekin, even though each of them spends 500 dollars a month. 7 thoughts on “How Much Is It To Be A Student?”