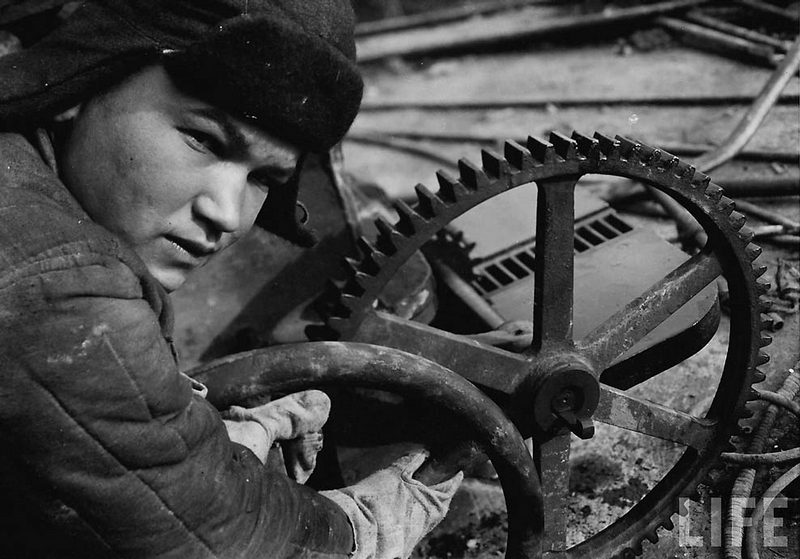 Margaret Bourke-White was an American photographer who got an opportunity to witness military scenes including the ones related to World War II. We have told you some facts about her life in the previous post. Margaret Bourke-White was born in the Bronx, New York, in 1904. Her father, non-practicing Jew Joseph White was an engineer and inventor, and her mother, Irish-Catholic descent Minnie Bourke, was a housewife. She grew up in Bound Brook, New Jersey, entered Columbia University and became a truly admirer of photography. In 1930 Margaret got a chance to take pictures of the USSR that had been attacked by the Nazi army and was the first female war correspondent. As the war progressed, she was attached to the U.S. Army Air Force in North Africa, then in Italy and later in Germany. She was afraid of nothing and considered herself to be a strong woman. Her book with wartime pictures called Dear Fatherland, Rest Quietly was issued in 1945. In the beginning of 1950 she developed first symptoms of Parkinson’s disease. Her career was over followed by a long-term and exhausting treatment. She stopped photographing and became asocial. Margaret died in 1971. Meeting at a factory. A woman is standing next to her house. Local people are waiting for their turn to buy some food at the shop. A woman is holding a piece of meat. Next to a village church.

21 thoughts on “The First American Photographer In The USSR”