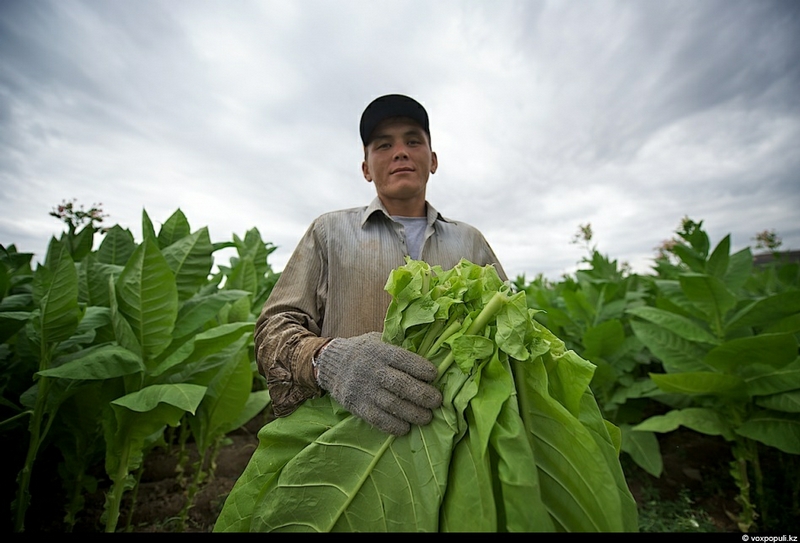 Tobacco plantations in Chilik district of Almaty Province were founded during the times of the Soviet Union, when cigarettes “Kazakhstan”, popular for their quality and aroma, were manufactured. Since then factories have changed greatly: now instead of Kazakhstan cigarettes there are new brands, but the plantations continue to grow tobacco. Tobacco seeds are usually sown in February and their transplanting in the open ground is carried out in April-May. The brand of this tobacco is called Nicotiana tabacum. A large plant with long leaves grows up for 1,5 or 2 metres. Collection of first tobacco leaves begins from the middle of July and lasts till late August, when the leaves start to turn yellow. One bush has about 12-18 leaves, which are gathered by hand, starting from the bottom. A bush with plucked lower leaves continues to grow during several days in order to develop remaining leaves. Then middle leaves are picked, and few days later, the most rich and juicy upper ones. Workers use gloves and closed clothes to avoid absorption of the tobacco resin in their skin. It is unprofitable to gather green unripe leaves as they dry for a long time and the raw material turns out very rough. On this plantation of 6 hectares about a ton of raw material is picked during one leaves collection. At first all sacks are collected under a shed, then leaves are laid out and the next stage of binding begins. Stringing of leaves is the most long and tedious process. During one day a worker strings 20-25 cords. During six months of continuous work, he can earn $ 1,000-1,500. Inhabitants of Kyrgyzstan and Uzbekistan specially come here for earnings. According to unofficial data there work 4-30 thousand people. Hands blacken because of tobacco resin. Besides there is so-called “green tobacco sickness”, when people feel giddy and sick, even red rash may appear because of nicotine absorbed into the skin. After tobacco leaves are collected in garlands, they are hung in the open air for drying. 8 thoughts on “How Tobacco Is Grown”