Tragedy that occurred to members of a hockey team in Yaroslavl city made not only inhabitants of the city but also entire Russian citizens go into mourning. Lokomotiv Yaroslavl was a Russian professional ice hockey team playing in the Kontinental Hockey League (KHL). Here players of Locomotive are expressing joy over the roll-on during the final match between hockey teams of Yaroslavl and Moscow region. Players from the Moscow region are listening to the speech of KHL President Alexander Medvedev who announced his decision to stop the match between the teams of Ufa and Moscow regions because of the aviation accident that happened to Locomotive. According to final data, two people out of 45 passengers could survive. The site where the accident took place. 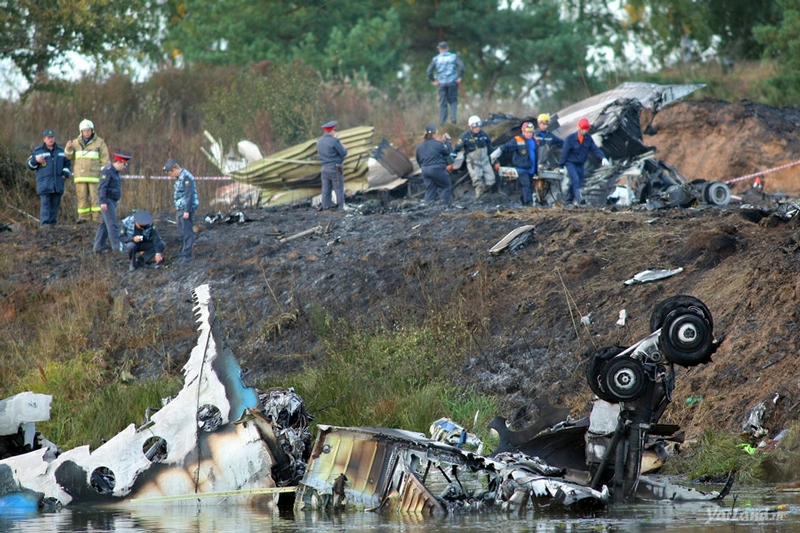 The medium-range Yak-42 aircraft that flew from Yaroslavl to Minsk crashed in several minutes after it raised into the air. During the accident the plane broke into two parts with its nose section falling into the Volga river, while the tail-piece remained ashore. The liner’s point of destination was Minsk, the capital of Belarus. There were 44 people aboard: 8 crew members and 36 passengers including sportsmen, coaches, and doctors. Doctors were fighting to save the life of two survivors – crew member Alexander Sizov and Alexander Galimov, who plays for Lokomotiv and Russia’s national team. He is reported to have suffered terrible burns. Lokomotiv play in the Continental Hockey league, which consists of 20 Russian teams and one each from Belarus, Kazakhstan, Latvia and Slovakia. 24 thoughts on “Tragedy In Yaroslavl”