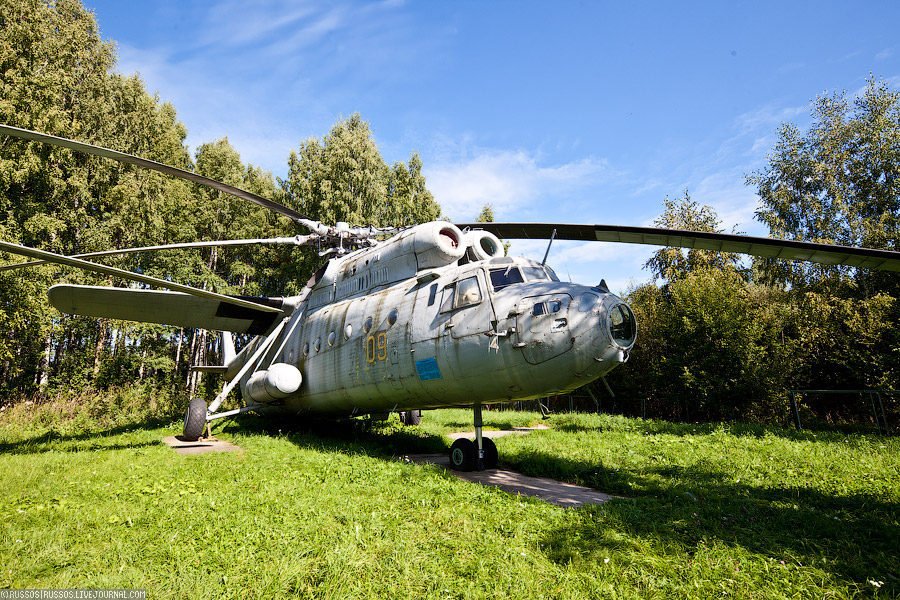 We’ve already visited the museum of helicopters in Totzhok. It is located on the departmental territory and is inaccessible for ordinary people. Theoretically, visitors can see this helicopter museum, placed in a military unit, only once a year. The museum is open for public visits on  the day of the Russian Air Forces. The Museum is located at the edge of the airfield. In general, exhibits are in good condition, although almost all of them need small repairs and the painting. The Mil Mi-1, the first serial Soviet helicopter and the famous Mil Mi-2. The Mi-4 is probably the most popular helicopter in the Soviet Union before the Mi-8. The Mi-8T  is the most mass twin-engined helicopter in the world, and it is also included in a list of the most popular helicopters in aviation history. It made its first flight  on the 9th of July 1961. The Mi-24A became the first Soviet and the world second largest (after the AH-1 “Cobra”) specialized military helicopter. The Mi-26 is the largest in the world serial Soviet transport helicopter. The Kamov Ka-27 is a naval multi-purpose helicopter. The Ka-26 in a patrol modification is designed for traffic police with loudspeakers, electric winches, a cargo hook, etc. The Mi-18 is an extended version of the Mi-8MT. The Mi-6 is a heavy military transport helicopter. Generally speaking the museum produces a good impression: there are some unique engines. But their appearance needs a little more of good keeping.

3 thoughts on “The Abode of Helicopters”