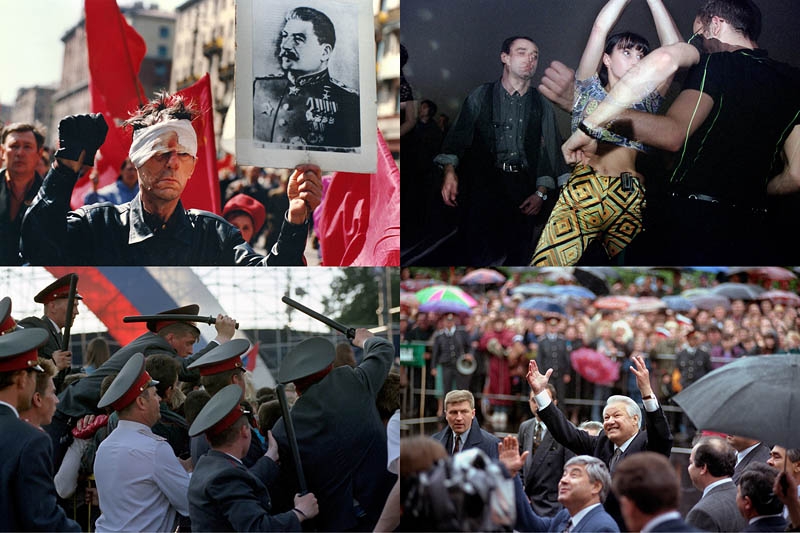 During 20 years  photographer Lucien Perkins covered events in Russia and other former Soviet countries. He came to Moscow for the first time in 1988 for the historic meeting of Ronald Reagan and Mikhail Gorbachev. In 1993 he again went to Russia for six months and he felt that it was absolutely different country. Photos of Perkins not only reflect the major political events of the time, but also capture the spirit of freedom that prevailed in hearts of Russian people in the 90s. A lonely demonstrator and communist walks on the street, covered with stones, after the bloody conflicts with police, 1993. A beaten communist with a portrait of Joseph Stalin during the march to Red Square, May, 1993. A sailor and his girlfreind at the Navy Day celebration in the Moscow Central Park of Culture and Rest, 1993. Dancing people in a Moscow nightclub, 1993. Girls are waiting for their turn during the christening of priests of the Russian Baptist church, 1993. A crowd of young people, held by police during a rock concert on Red Square in 1993. A recidivist demonstrates his tattoos while his cellmates give a coarse laugh. The corrective labor colony in Kovrov (240 km from Moscow), 1993. Women and children save themselves from the police raid on a Gypsy camp in the woods near Moscow, 1993. Then law authorities found documents, money and jewelry, apparently stolen from foreigners. Crowds of people came to look at tanks that surrounded the White House, during the confrontation of Yeltsin and parliamentarians in 1993. Demonstrators look at the tanks, going to the White House, October, 1993. Mother weeps at the funeral of her son, who was a soldier of the elite special forces. He was killed in October, 1993 during the capture of the Parliament by forces devoted to Yeltsin. After the USSR collapse in many former Soviet republics, including Georgia, civil wars broke out. In the photo: ethnic Georgians run away from Abkhazia, 1993. Georgian soldiers and civilian refugees from Abkhazia look at a taking off helicopter, 1993. Pioneers during the speech of communist leader Gennady Zyuganov in the center of Krasnoyarsk, 1996. An elderly couple with a portrait of Stalin during the communists’ meeting in support to Gennady Zyuganov at the presidential elections. Moscow, 1996. The first and the last Soviet president Mikhail Gorbachev and his wife Raisa fly to Samara during presidential campaign in 1996. Only 5% of voters supported Gorbachev at those elections. Muscovites in a polling station during the first Russian presidential election in 1996. A Cossack and passers-by watch Patriarch Alexy II, head of the Russian Orthodox Church, leaving a polling station during the presidential election, 1996. Policemen beat spectators striving to get to the stage during a rock concert on Red Square, 1996. Yeltsin is warmly welcome during his visit to Kazan, 1996.

27 thoughts on “The Russian 90s By Lucien Perkins”