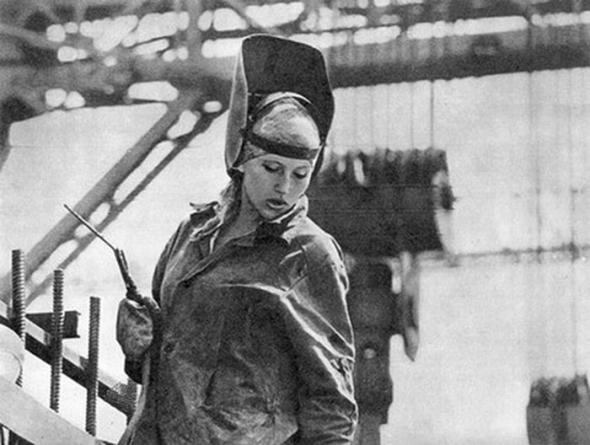 Very few of us realize that the vast majority of women over 30 in the Soviet Union were ugly, fat, untidy, with bad teeth. But that wasn’t their fault. They were forced to live according to the rules which their mothers and grandmothers lived according to. They did hard men’s work and didn’t care much of their beauty… Well, this post is about strong Soviet worker women who, in spite of their outer ugliness, do deserve admiration! In the 30’s Soviet women were sat at the wheel of a tractor and forgotten to be taken off. And it’s them (yeah, those blonds working on tractors) who obliged Russian people with the victory in WWII. Only because of them Russians could call up much more soldiers than Germany could afford. Almost a third of a fit for military service Germans remained in the rear! A German Frau couldn’t and didn’t want to replace her husband at the lathe! Russian women could. Not because of the great desire… but still. A high price had to be paid for this – current problems with demographic statistics go back to those times. No more than one child in a family was a natural thing for that period of time… However, let’s return to the question of beauty and think of the following: where were Soviet women supposed to get all this “beautifying” stuff?

In a country of triumphed socialism, cotton wool was the only thing used for all hygienic purposes. Only by the time of the Olympic Games held in Moscow, there appeared the first sanitary pads similar to a bath sponge. As for cosmetics, they used powder resembling crop dust and eye shadow looking more like blacking. Other popular cosmetics were an indelible pencil (quite ordinary, not cosmetic) and parquet lacquer with acetone coming complete. Note, all this took place in the 70’s. But by the beginning of the 80’s the progress was obvious. Polish cosmetics imported into some Soviet stores were something exotic. And it doesn’t matter that the Polish themselves used them for making up the deceased… The first French brands appeared in the USSR during this time were often produced in Syria and Egypt. Perfume “Red Moscow”, the only decent smell released by the powerful perfume industry, was popular till the very 80’s. No need to mention that Soviet women didn’t care much of a bikini line and armpit hair. Everyone wore white pantyhose put above hairy legs. And if blonds were somehow justified, the southern ethnic groups weren’t exactly. A mustache got little attention as well. There were too many other things to fight against…

Besides, a Soviet woman was considered “chic” if she could allow herself to wear the whole pantyhose under trousers. But if she allowed herself not to wash them, she was considered… Most Soviet women had a permanent wave on their heads. It made their hair look like wire and come out by the old age. Some of them wound their hair with iron rollers. Imagine the feelings of a husband when he came back home from work and saw this: a fat monster with the mouth full of metal/gold teeth, cucumbers on cheeks (skin care), hairy legs and several rows of fashionable heated rollers on the head. Speaking of teeth… Nowadays gold teeth are considered a sign of apparent provincialism, but at those times they were a sign of wealth. The underwear of Soviet women in 90 percent of cases was produced in the Soviet Union. Very often these were shapeless pants and a bra of the same kind, more resembling a portable parachute of the Airborne troops. Dyed in bright colors they contained up to 100% of synthetics. Outer clothes were a little bit better. Czech shoes were quite popular in the capital in the 80’s. Strong-durable, comfortable but not aesthetically acceptable. Fur coats resembled heavy bulletproof vests. Caps were made from the tail of a Siberian fox. However, if a Russian woman took off all these clothes and washed off all heavy make-up, she would turn out to be quite pretty. The problem is that it was almost impossible for an ordinary Soviet woman to break this vicious circle. Only celebrities were able to do this. Plus, the massive use of female labor in hard and low-paid jobs. 33 thoughts on “All Truth About Soviet Women”