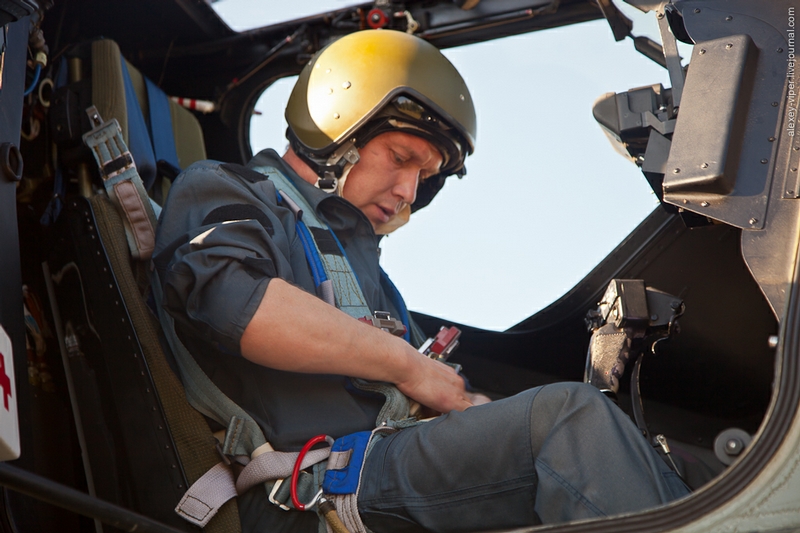 Aircraft fans rarely like rotary-wing machines. And it is difficult to explain. Someone says that here is less romance, someone complains of a narrow assortment of colors. Many other causes may appear, but the fact remains: the helicopter is a unique aircraft that can do almost everything. It can land on a patch of ground or hover in the air, throw troops or pick up the wounded, act as a building crane or make a loop. And the people who drive these machines do not agree to be in the background of the modern aviation. Russian Air Forces have a great history: the flowering period of the USSR, the decline of the early 90s, and nowadays hopes. In the era when fighter airplanes were sitting on the ground because of lack of kerosene, here helicopters were actively working, as they were necessary for any military operations. And traditionally, Russians prepare pilots for the buyers of their aircrafts. So here, near Torzhok, you can meet pilots who speak many different languages​​, and have skin of different colors. The center teaches to fly guys from Venezuela and from the Far East, and it is the first to receive all new military rotorcraft equipment. To say that life here is in a full swing is to say nothing. Everywhere helicopters are patrolling, practicing all kinds of flying elements. One crew hung in a contemplative pose, raising a cloud of dust, and other crew torments the winch, lowering the cargo on the ground. And all this is controlled very attentively. Working days proceed without hustle and running about. Only blinking dots on the locator screen do not rest. MI-28 goes to the stopping place. Half an hour for the maintenance, refueling, replacement of crews – and it again will leave to the sky. The tank destroyer KA-52 is prepared for a flight. It is a surprise, but the checking procedure of all the systems before a flight, without any hustle and bustle, took just few minutes. The helicopter jumped up very quickly, like a cork flew out off a bottle with champagne. His companion also did not lag behind. The educational process is similar to a conveyor. Engines are not stopped, one crew left aboard, another crew took the cab – and a rotary-wing machine again goes to the sky. Actions in emergency situations, that may occur in any flight, are practiced on a simulator. This machine is impressive. About a dozen projectors form a panoramic picture of the terrain. The effect of the presence is more than amazing. After just few seconds of being inside the simulator you will feel giddy. This flight is made around Adler. The new database forms the image of the surrounding terrain. Flights are flights, but dinner must be on time. Safety of flights will be much higher if pilots do not think about a plate of soup during their missions. It is not a restaurant, of course, but no one goes away from here being hungry. Then again to the sky.