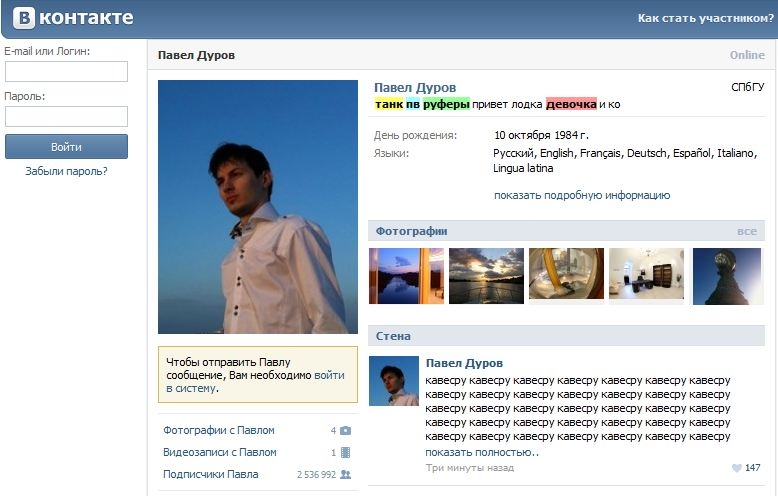 Vkontakte is the largest and the most popular social network in Russia. It’s very similar to Facebook. Millions of people visit it every day. Its founder’s name is Pavel Durov. Lately, a mysterious status has appeared on his page. It said: “tank pv roofers hi boat girl and co”. The status remained on his page for many hours. Later they explained it this way: “It was done by some children during the excursion to the office of Pavel”.

However it turned out that these were the names of the roofers who penetrated into the office of one of the richest man in Russia and who put the status on behalf of his name. They were reckless enough to open this information on the web. More details are inside the post. One Saturday evening a group of roofers from St. Petersburg decided to climb the roof of the “House of Books”. By a lucky chance, one of the windows of the office “Vkontakte” located right under its yellow dome was opened.

When they were about to enter it, they noticed a PIR sensor behind the curtain, clapped their hands, quickly hid and started waiting for the reaction. Everything’s quiet. Then they came in and saw another PIR sensor and a camera. The red light on the first device was implying – they had been noticed again. Still, there was nobody around. Such a don’t care attitude of the security inspired confidence in the guys and they continued their way upward. The dome turned out to be darker and much more narrow as it seemed to be before. The head of one of the roofers. A narrow pipe leading to the very top. A photo to remember. Now it’s time for the most interesting part. The pictures of Pavel Durov’s office and computer. The latter managed to turn on only at the second attempt because of some malfunction. You already know what happened next. As fot the guys, they successfully left the building not even knowing that their joke had already been ardently discussed on the Internet.

Is it really that simple to do such things in Russia? All for fun!