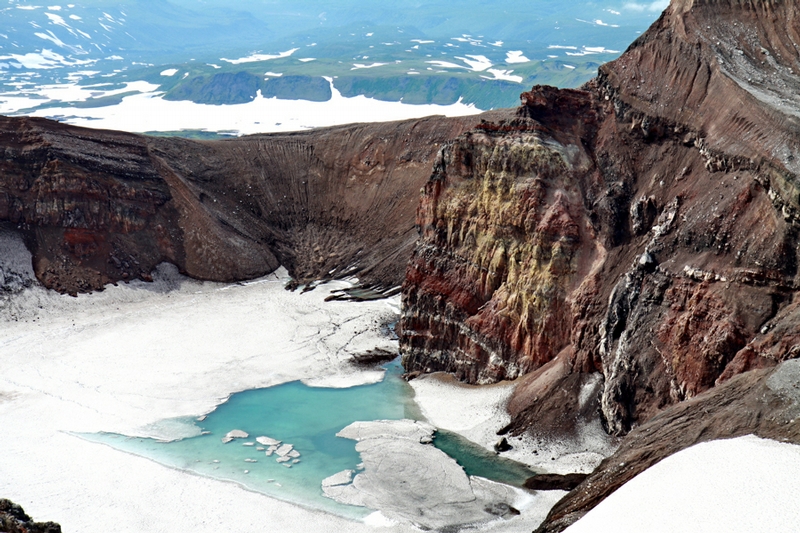 No matter how wonderful the city of Petropavlovsk-Kamchatsky is, it’s still just a city. And if you want to see the main attractions of Kamchatka you should leave the urban area and go into the wild.

It takes 3 hours to get to Gorely Volcano from the city by car.

A normal paved road ends after the village of Termalny. The further 50 km stretching along the forest zone (the home of hungry bears) are in terrible condition. Still there are many tourists lounging about and risking their lives. By early August, the road to the pass is covered with snow and even the Kamaz have difficulties moving along it, not to mention the pictured minibus. All passing by drivers are usually friendly and ready to help. Transmission lines stretch parallel to the road and make it impossible to get lost. The “Do Not Enter” sign indicates the turn to Gorely. This car brought a group of tourists and got stuck in the snow. The group had to continue its way on foot and the driver had to stay and wait for help.

The camp of the above mentioned tourists.

The top of the volcano.

The absolute height of Gorely is 1829 m. 11 craters are located on its top. The edges of many of them cross each other and create a very bizarre picture. The volcano became active during the glacial period. The last eruption was in 1986. A small waterfall located in one of the craters is wrapped in thick fog. The sound which it produces is similar to the roar of the turbine of a plane. The view from the volcano – the valley with the transmission lines and a small crater in the foreground. Behind the crater is the lake into which a few cars fall annually.

The same crater in against the background of Viluchinsky Volcano. Tourists launch a Chinese lantern into the sky. The sun and the cloudless sky in the morning. The inactive crater of Gorely.

And an emerald lake right in its center! If you go further, you’ll see the second crater. And here is all as it should be – much smoke, noise and difficult to breathe. When the wind blows, it’s not too bad yet, but when it calms down, you immediately get a headache. There is also a lake inside the second crater and the whole landscape reminds of the one after an explosion. The lake seems to be acid because no signs of life are noticed. The red hole in the bottom of the crater smokes heavily and emits unbearable heat. The whole wall above the hole is bright yellow and that’s where the sound of the turbine comes out. Though Gorely always smokes, its smoke is seen only sometimes (when the air reaches a certain temperature and humidity, it becomes visible). And the way home. Luckily, half-meter snow drifts on the road are sometimes cleaned up by bulldozers…

2 thoughts on “Fascinating Gorely Volcano and Its Craters”