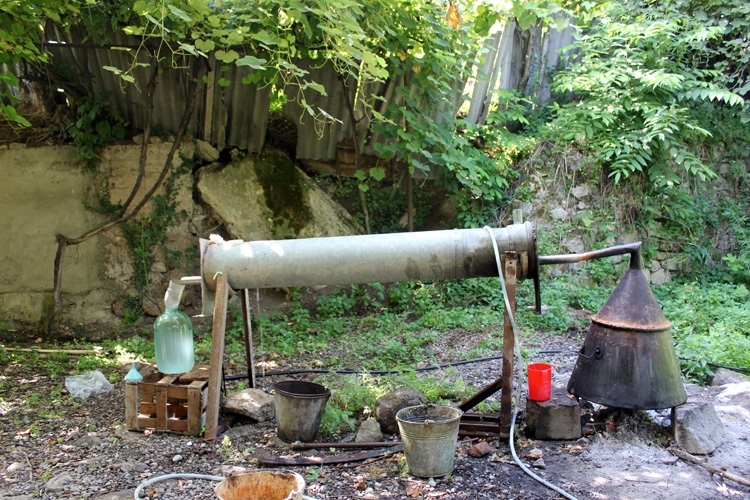 Mulberry oghi (clear fruit vodka) is a strong alcoholic drink mainly produced in Azerbaijan and Armenia. It has the delicate and unique aroma of mulberries and herbs and a pleasant, slightly oily taste. It is on a level with such premium drinks as tequila, rum, calvados and brandy. Let’s visit one Armenian village and see the process of its production. The process begins with the collection of mulberries. A large piece of cellophane is put under a mulberry tree. A man climbs the tree and starts actively shaking its branches… Mulberries fall down on the cellophane. Then they are cleaned of garbage and processed into juice which is poured into tanks for fermentation. After that it is distilled in a special copper apparatus like that which you can see in the first picture. Then the juice is boiled in a vat. A special funnel with a narrow bottom is put on the top of the vat and joined to the apparatus. The junction is carefully smeared with paste or manure in order to provide airtightness. Many, by the way, prefer the latter one as it’s cheaper. The juice is boiled for a few hours until steam starts actively evaporating moving inside a horizontal tube. The most part of it is hidden inside a cylindrical vessel which contains cold water. Throughout the whole process of making mulberry vodka water is poured into the cylinder from one side and poured out from the other.
Cold water converts steam in the tube into the very alcoholic product. Mulberry vodka is distilled several times, usually twice. Still some people prefer it to be very strong and that’s why distill it three times.

For this, the vat is cleaned and filled with mulberry vodka produced after the first distillation. Then it’s distilled once more so that to make it purer and stronger. In this way, one can produce the drink stronger than 60 percent alcohol. Once having tasted it, one will probably never drink usual vodka anymore. Cheers!

21 thoughts on “The Production of Delicious Mulberry Vodka”