In 1959 French models and clothes of Fashion House Christian Dior arrived in Moscow for a fashion week. Soviet people of those times who had just survived the most awful war in history could never forget the beautiful ladies and their dresses. The French guests took some photographs that were even published in LIFE magazine. Soviet people were simply shocked by what they saw. It was written on their faces that were luckily photographed by Howard Sochurek. Besides, everything French has been in the fashion for many centuries in Russia: the French language, French novels, French fashion itself… Soviet women were charmed by French stylish beauties.  They wanted to resemble these French, try one their furs and dresses…

Inside the post you can look through the instructions that were given to the French citizens before their arrival to the USSR by officials of the French embassy in Moscow. 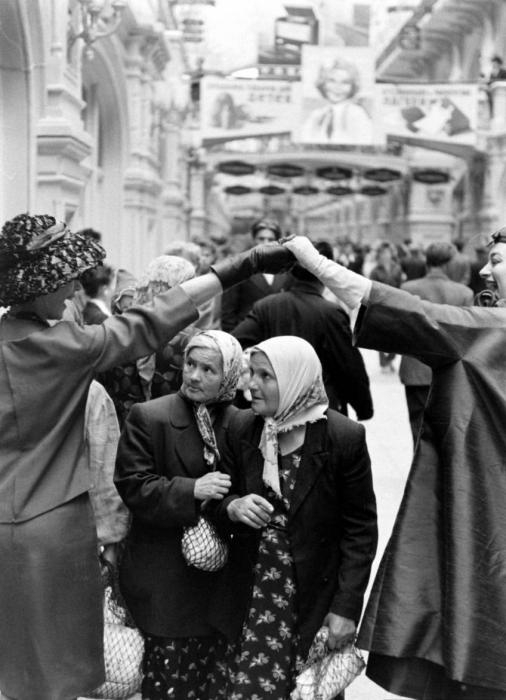 Don’t forget to take your cigarettes, lipstick and cosmetics. Mind that whiskey is not sold in the USSR. (On the picture: “French Fashion” – “Hristian Dior” – the name was misspelled.)

Please, avoid photographing. In case you have a camera with you, never take pictures of children, houses, bridges and military constructions. Be ready to answer such questions as where you are from, whether you have been to the USSR before, what you do for a living and what your impression of Moscow is. These are all signs of hospitality. Don’t be confused if you see that people in the street are smiling when they look at you. It can be explained by the difference in the clothes and behavior. A cab driver’s standard gratuity expectation is 10% of the total sum. In any other case giving a tip is not acceptable. During receptions take moderate amount of alcohol but never refuse to drink as this can be considered as mere insult. You will be supplied with cards which must be given to any person in the street or anywhere else whom you may like. Have a couple of detective stories which you could read yourselves or hand to embassy officials. We would ask models to look through special instructions and a list of questions before they are interviewed. Women must never wear trousers. That was the reason for negative attitude of Soviet people to some cinema stars.