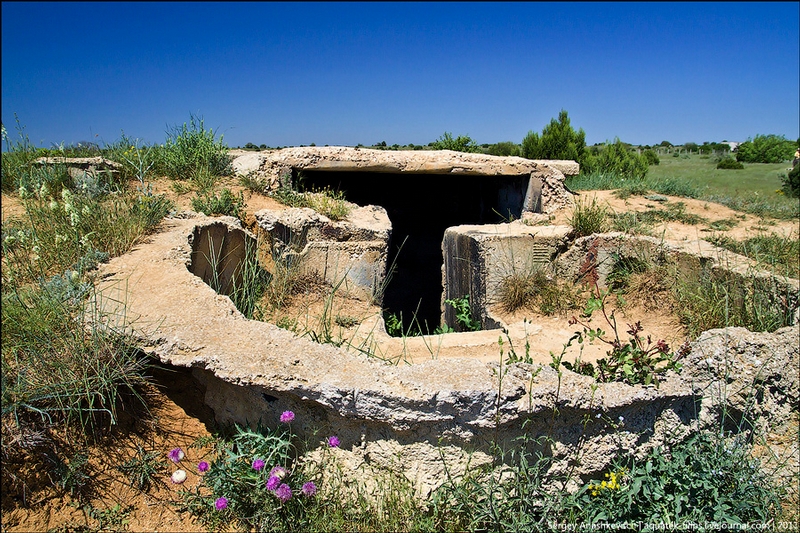 Last time we visited an abandoned military object in The Crimea. Today we’ll have a chance to look at an abandoned storage battery close to Balaclava, a town in the Crimea, Ukraine. During the Second World War, Balaklava was the southernmost point in the Soviet-German lines. The battery was built by Russian kings in 1912 and abandoned at the time when Soviet power was established. It had actually been used till 1930. Now the military object is covered with field flowers. Its  territory starts with a broken concrete bridge and a door with greeting words that says: “Welcome!” The signs of hospitality are followed by a road that hasn’t been used for quite a long time. The battery was included into the Southern group of batteries. It was built in 1912. The order of the Russian tsar (king) was completed in spite of the fact that construction was hampered due to lack of roads. The steep bank is almost 100 meters high creating an ideal position for observation and firing. Now only destructed areas and storages are left here. The battery was supplied by two pavilions including an observation spot located in the middle part of the main construction. The battery had 4 28mm weapons at its disposal. They were out of date at the moment when the construction was over but still had to be used. Due to the steep bank the task became less complicated making it easy for the battery to withstand the enemies’ ships trying to attack the northern bay of Sevastopol by fire. The place was occupied by turrets. Weapons were distributed freely around the front part. Missile cellars supplied with a system of artificial ventilation were located nearby. It is not known whether the battery was used during World War II. Bombardment traces are not observed on the massive part of the battery. All premises were situated at the same level that’s why the stories about hidden rooms under the battery are not true to life. The technological part that embraced an electric station and other supplementary facilities are united with the main construction massive which is 20 meters long. Entrance to the gallery. The system of land-based defense provided the battery with covering fire and included walls and a trench. Positions for assault guns were there alongside the trench. The assault guns were hidden and taken to the walls in case there was a necessity. The battery was ready for military actions during the World War I but never had a chance to use its weapons. Its out-of-date guns didn’t present any interest for soldiers of the Red or white Army. In 1920 the concrete rooms of the battery served nonmilitary needs. Surface-to-air missile launcher were located here till 2004. The storages are destructing right in front of your eyes. Paint still sticks to the walls which slowly go down together with the ground that hides them. The ribs of storages are borrowed by the local inhabitants. The view could make stay of soldiers unforgettable.

12 thoughts on “Abandoned Battery In The Crimea”