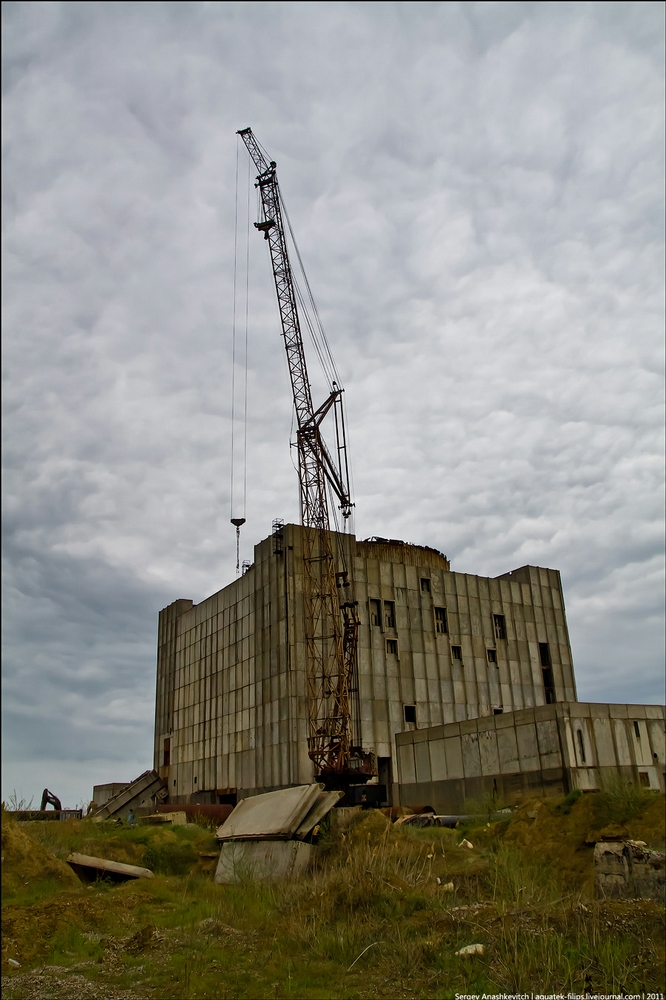 The construction of the Crimean Nuclear Power Plant was started many years ago, in far 1975. Then, the state spent millions of Soviet rubles on it (according to some sources, even billions). But when the plant was almost finished in 1989, it was decided to stop its construction. Why? Because the memories of the recent disaster at Chernobyl were still very fresh. Besides, a new political situation, the views of environmentalists and many other factors played their role as well.

Now this abandoned facility is included in the Guinness Book of Records as the world’s most expensive nuclear reactor which remained unfinished. Imagine the scale – it had to provide the entire Crimea with electricity. Let’s have a walk around its ruins and look at the process of its dismantling. Approaching the plant. An administrative building and an observation tower. Broken bricks and chips of concrete are everywhere. In the background are the first power unit and an engineering building.

A close-up of the engineering building. Satellite dishes hint that there are people inside. And these are the first unit and a unique giant crane which is now used not for building but for dismantling.

Some interesting facts. During the construction of the first reactor, a unique polar crane “Danish Kroll K-10000” was used. That crane served for lifting and assembling operations inside the reactor building. It was the highest crane in Europe. In 2003, the State Property Fund sold it for 310.000 hryvnia while its starting price was 440.000. It would cost more even if it was sold for scrap metal…

Before being dismantled, the crane had been used for base jumping. Jumps were made from the lower (80 m) and upper (120 m) crane booms. Today another crane is installed here. It’s very similar to the previous one but quite smaller. It’s used for dismantling only. You can estimate its size looking at a tiny car at its bottom. Powerful machinery looks toy against a background of the concrete monster. The reactor building. The thickness of the walls is quite impressive. A transport corridor of the power unit. The entrance to the reactor zone. Metal is as thick as an arm. The sounds of metal cutting tools are heard inside the reactor. Sometime, here was the reactor… The view from the lower corridor. Do you see the ends of cooling pipes? A bolt found nearby. The almost complete absence of corrosion is surprising. Only the oxidized surface. Let’s come back to the crane. Rollers. Below each pair is a narrow-gauge. One of the pipes is used as workers’ shelter. A lot of machinery. And this junk seems to have been standing here for quite a while. Cylinders here are like replaceable batteries for a TV remote control. A destroyed external transition from the engineering building to the power unit. That what is left after the work of “metalworkers”. The results of intensive breaking. The landscape reminds of a burnt by Nazis Belorussian village with its furnace chimneys. The panorama of the ground in front of the engineering building. Everything has already been dismantled here.

The panorama of the ground where metal cutting is carried out.