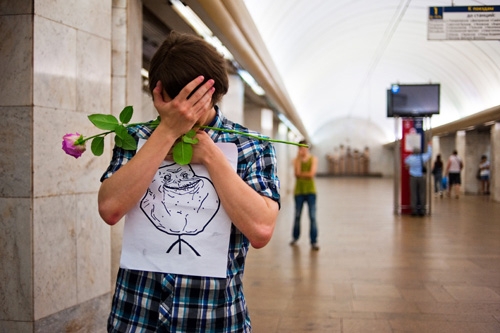 The Great Saturday of Roses passed in Moscow without being noticed. Russian students took an example of their colleagues from New York, anonymously registered at dating sites and invited several young men on a date. Obligatory conditions of dates were to be at the station Petrovsko-Razumovskaya, at 18:00, with a rose in hands. A rose was like an identification. Then these students reported on their “decisions” – they said about victims to each other. There was a whole plan how to deal with possible daters at sites. Students could pretend to be an old (very old) girl friend and wormed themselves into their confidence. Then they complained about their loneliness and so a conversation began. People found something in common, music for example. But hunters warned each other that it was better not to give telephone and icq numbers naming some standard excuses. Victims could turn out to be not victims at all. Hunters had to be very careful, moreover they didn’t have to rush things and be a little shy and flirtatious. More often such victims aren’t attractive or experienced in love young men… Everything went as it was planned, victims were standing at the station at the fixed time. And of course, with a rose. They hoped for this awesome exchange – a rose for a night… As a result, poor desolate boys stood in corners of the station and were waiting for a miracle. “Oh, may be she is late a little, girls always do this…” But no. Everybody came in time. Lovers of funny situations and those who like to mock at others gathered at the end of the station. This crowd started walking here and there crying: “Those who came with roses were tricked!” in a megaphone. Daters were very confused and tried not to believe that they were just derided. Internet lady-killers continued staying here and not believing at the absurdity of what was going on. Students came to everybody of them and told that it was very silly to believe in some internet big love. Practically all people from this pictures are participants of the flash mob. The station is desert at week-ends. What a professional disguise! Of course, he is just dealing with his phone! A victim panics and takes to flight. Here I am, your beautiful lady! This young man kept saying he was waiting for a real girl. What a pity! Remains of roses are like pieces of broken hearts. 44 thoughts on “Be Afraid of Internet Affairs”