Sometimes tourists of Sevastopol may just walk and admire views of the Sevastopol bay when suddenly they see a yellowish building with many windows that stands on the opposite shore of the bay. It is very surprising but when locals are asked about this building, they say that there is nothing interesting.  Today we’ll find out whether it is true or not. The Mikhailovskaya casemated battery is located on the northern side of the Sevastopol bay. The battery was part of the so-called fortress of Sevastopol and existed before its construction that began in 1834. For the first time it was the 2nd earth battery, but later it was reconstructed in a three-tier stone fortification during the construction of a second defense line of Sevastopol Bay. This place still keeps bloody wounds of WWII both outside and inside. Traces of shells and bombs are seen everywhere: on facades, walls, roofs and loopholes. One of shells stuck in a wall. A casemate. The thickness of a loophole wall is 1.8 meter. Recoiling tholes. Ropes holding guns during recoils after a shot were fixed on them. Gunners put out fuses in buckets concreted into the floor. 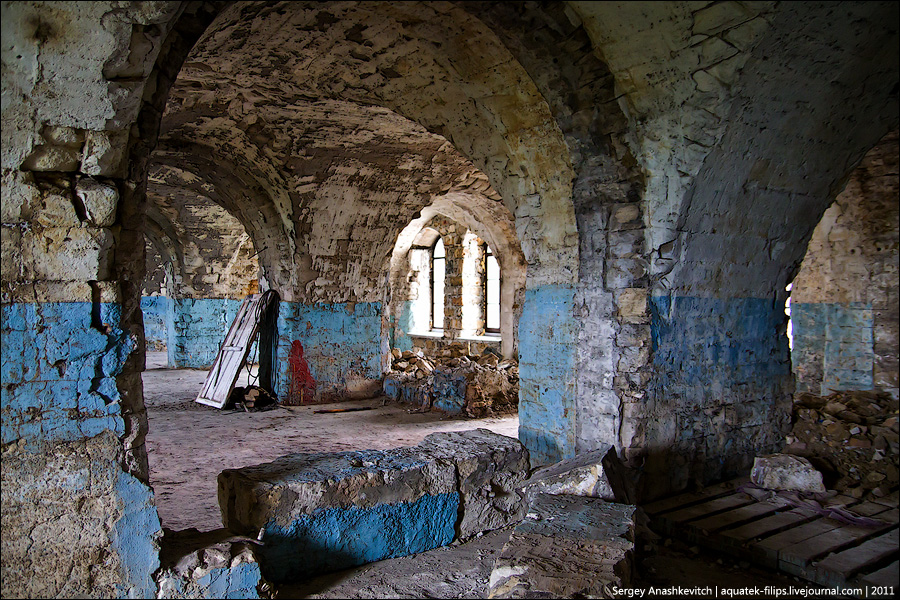 Somewhere under the ceiling even electric and telephone wires remained. This is the result of a collapse made by a direct hit of an aerial bomb near the northern tower. Workers of the Sheremetyev’s museum are engaged in restoration works of the Michaylovskaya battery, they dig in this place, removing stone by stone. Recently decomposed human remains were recovered from this debris. According to the museum director, two men were lying in a bed and they died instantly after a bomb hit. Nobody knows what else could appear here, so excavation works are made very carefully. Officer’s boots, parts of a service cap and respirator. All walls have such plates with the inscription “Rack №42” and with other numbers. Bags with lime lay here from time immemorial. It is difficult to sort them out: it’s actually a solid pressed stone. Pay attention to a brickwork. It was changed at least 5 times and 5 different types of bricks can be counted in breaks. There is a deep niche behind walls. The director said, there are reasons to believe that here was a hiding place. May be that is why walls were always rebuilt. These beds stood here from the war times. Mattresses, blankets and pillows decayed long time ago. The 3rd tier of the north tower. These corridors have terrifying walls with scary inscriptions. Most impressive ones: “Only three of us left”, “We are dying for the homeland”. An arch of the tower. An access to the roof is behind it. It was called “firing”, because fascists shot Soviet prisoners here. The northern wall. Most probably, Soviet soldiers held here the line of Sevastopol for a long time. 16 thoughts on “Not a Place For Tourists In Sevastopol”