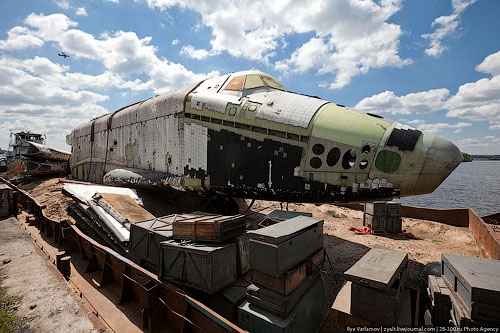 After several years of rotting in the open air on docks in Tushino, the spacecraft Buran will be restored, then demonstrated at the air show MAKS-2013. Recently the “Buran” was brought from Tushino to Zhukovsky, where it will be restored and displayed. So let’s look at the pride of the Soviet space industry. The spacecraft fuselage, its wings, fin, landing gear and other details were loaded onto a barge. Preparations for the move took about three months. This time includes the waiting for locks to start operating. According to the plan of designers the Buran would fly into space, but due to the suspension of funding of the program “Energy – Buran”, the spaceship was not completed. It was assembled at the Tushino engineering plant, and only 30-50 % of the work were done. In October, 2004 the unfinished ship was transported from the factory to the mooring, which also belonged to the plant. There was no canopy over the vessel. It arrived to Zhukovsky in such condition. By the way, on the waterfront in the Park of Culture there is not a real Buran, but a model for static tests. Burans were made at the Tushino engineering plant, then they were carried out to a nearby water reservoir and from there rafted along the Moscow river to Zhukovsky. An airplane “Atlas” transported the Buran from Zhukovsky to Baikonur. The first and the only flight of the Buran was made ​in November, 1988. In 1990 works on the program were suspended, in 1993 – were finally cut down. Practically all expensive thermal protection tiles were taken for souvenirs. One of pieces left by vandals. A thin ceramic layer is on top. There is almost nothing inside. By the time of closing of the program, five flying spacecraft Buran had already been built or were under construction. According to one version in the museum there is the product 1.02 Buria, that was going to make a second flight in the automatic mode with a docking together with the manned space station “Mir”. According to another version there is only a mockup in the museum. The Buran, which flew into space died in Baikonur. At 9:20 am, May 12, 2002 the crashed roof buried the only Soviet vessel  Buran, that rose to space, its carrier rocket “Energia” and eight people. The cause of the roof collapse of the assembly and test building in Baikonur could be tons of water accumulated on it and tons of construction materials brought there. A restoring of the building is not planned. 49 thoughts on “The Second Chance For Buran”