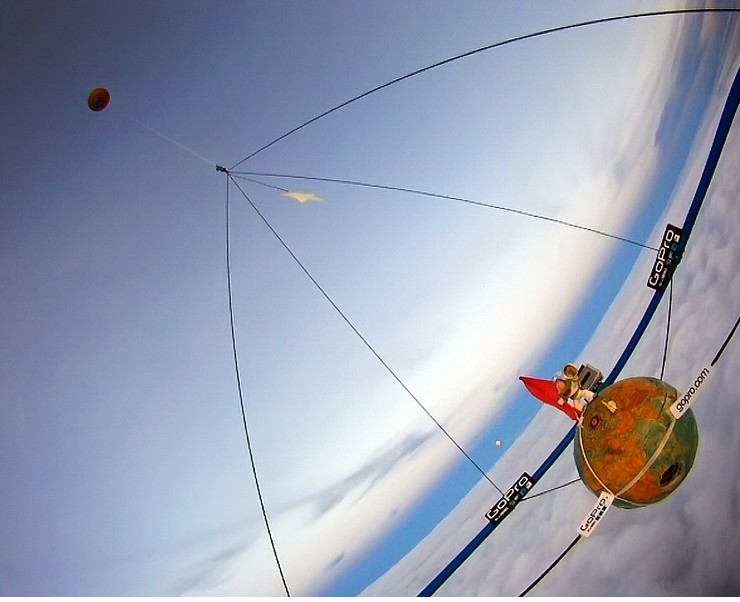 The space attracts all people with its mystery. And Russians are not an exception. During weekends some of them construct little aircrafts and launch them into the cosmos instead of ordinary walking or going to cinemas. 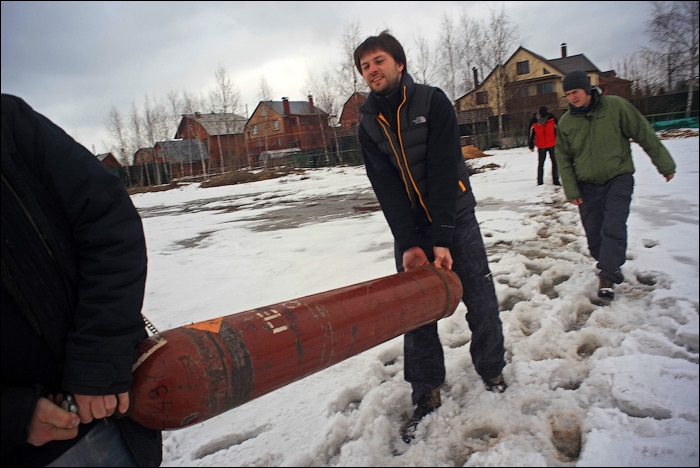 First of all, for the launching you need a weather balloon, or its analog – an old American military ball that was easier to get than a Russian balloon.  During the ascent the balloon is constantly widening  because of the decrease of atmospheric pressure, and at a certain height it will inevitably burst. The balloon may be filled with helium or hydrogen. Inert helium, unlike hydrogen, is safer, but hydrogen has to be used for record launchings because of its greater lifting capacity. The 40 liter container under pressure of 150 atmospheres contains 6 cubic meters of helium. One cubic meter has a lifting capacity of about 1.1kg. The more cubic meters of gas a balloon contains the more it can raise and the lower it bursts. By the way, it is important not to forget that the balloon weighs about 2 kg and this weight has also to be lifted. A globe may be chosen as a container for a payload. It has excellent aerodynamics. The balloon was covered by pieces of foam plastic with two holes for lenses of two cameras. In addition, there were two GPS/GSM trackers and three GoPro cameras fixed outside. When the balloon bursts there starts the time for a parachute. The speed of fall is about 60 km per hour (without the parachute it would be about 200km/h). GPS/GSM/ GPRS beacons “AvtoFon Mayak” (a device for finding stolen cars) may be useful for searchings, because they can work in offline mode for a year and they have been developed in Russia in accordance with the Russian severe climate. After the landing, both trackers connect with base stations GSM, define their positions and send SMS with this information. Of course, there were a lot of problems that were necessary to solve. For example, how to deal with misting or freezing of a front lens? Or how to define and remember the maximum height, temperature, speed? And so on. A team of rescuers went for the searchings. The process was coordinated by walkie-talkies. The balloon landed on the river Great Ushma, near the tract Island. This bridge was dangerous for heavy cars. Searchers were practically able to get to the landing place by cars, but they had to pass 4 km on foot through marshes. Here it is at last! A minute of rest. That is the aim of the launch : the beginning of the lunar eclipse over a layer of clouds. The balloon is hidden in the clouds. It is the last record of the laser range finder. Clouds from above are amazingly beautiful. 5 thoughts on “Launch of a Handmade Aircraft”