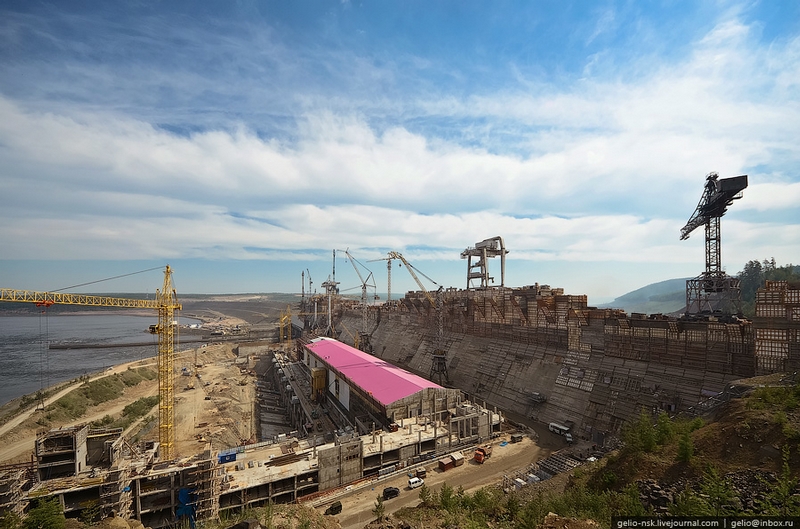 The Boguchanskaya GES is a hydropower plant under construction on the Angara River in the Krasnoyarsk district Territory. It is included in the Angara cascade of hydropower plants. Its location is the town of Kodinsk, Kezhemskiy district of the Krasnoyarsk Krai. The construction of HPP began in 1980, preparatory works began in 1974. According to the approved project the plant must have the hydroelectric capacity of 3,000 MW. The building of HPP should include 9 radial-axial generating units with the capacity of 333 MW. The Boguchanskaya GES was designed by the institute “Hydroproject”. Preparational works for plant construction began in 1974. In 1987 the channel of the Angara was blocked by a concrete dam with a temporary gateway. The hydroelectric power station building is of great importance for the development of the Lower Angara and Siberian economic region in whole. More than half of the electricity generated by the plant will be used during construction of an aluminum plant. Pressure constructions of the hydroelectric power station (the length of the waterfront is 2587 m) will create a large reservoir Boguchanskoye with the area of ​​2,326 km ². In preparing of the reservoir bottom 149.5 thousand hectares including 29.6 thousand hectares of farmland are flooded and it is necessary to resettle 12,2 thousand people (some people have already resettled) from 31 settlements. According to the plant project the height of the head race above sea level should reach 208 m, an intermediate reservoir level during the work of first generating units must be 185-186 m. A rock-fill dam with an asphalt concrete diaphragm. Currently building and construction works in station facilities are continuing, installation of the first three generating units, crane and electrical equipments is held, and also the thermal outlines of the building and of the office-industrial complex are formed. The stational part of a concrete dam has the length of 270 meters, and consists of 9 sections each of them have receiving waters and penstock with the diameter of 10 meters. They are used to supply the plant turbines with water. Impellers turbines (№ 1-7) arrived at the construction site by water from Saint-Petersburg. Impellers № 8,9 will be delivered during the navigation period of 2011. Boguchanskaya turbines have the largest weight and dimensions among all products made in Russia over the past decade. The diameter of turbine impellers is 7.9 m, weight – 155.6 tons. Dimensions of these wheels are superior to similar units of the SayanoShushenskaya plant. Power lines on the island Chelbihin. A view on the dam from an airplane. The airport building of city Kodinsky. A pilot’s cabine of An-24. Charter: Kodinsk – Krasnoyarsk. The city of Kodinsk is located in 12 kilometers from the HPP and in 735 km from Krasnoyarsk. The beginning of operation of first power units complex is expected in spring 2012. The start of plant working at full capacity is scheduled for 2013.

5 thoughts on “The Boguchanskaya Hydropower Station Under Construction”