Khiva is an ancient city of approximately 50,000 people located in Xorazm Province, Uzbekistan.
It’s abundant with historical places of interest. 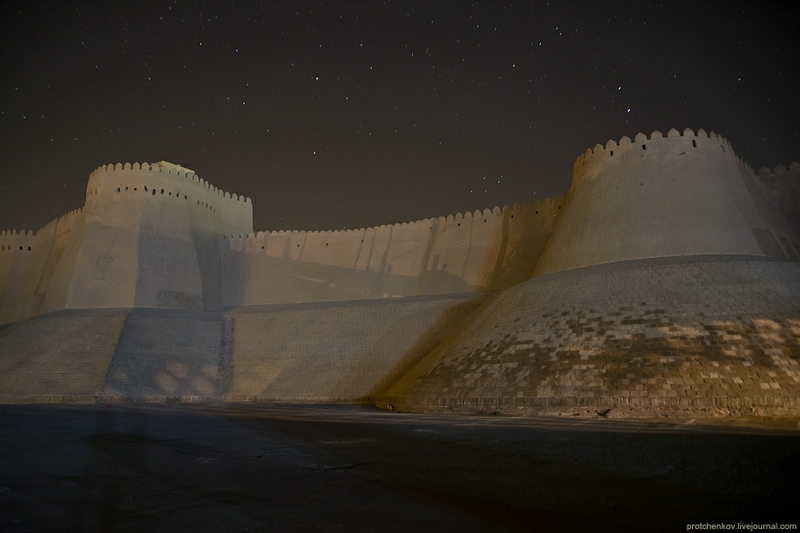 The city was built over two thousand years ago. Its constructions are dated to the beginning of the 18 century. The city of Khiva was first recorded by Muslim travellers in the 10th century, although archaeologists assert that the city has existed since the 6th century. The old city is walled. This is what was seen by the local Khan standing on the high tower.  Swallows make their nests inside the walls. A part of the city located outside the fortress. The highest minaret of the city. Climbing the minaret is still allowed. But it’s not allowed to climb the minaret of the same located in Bokhara. There is not much pleasure in climbing spiral stairs of the minaret where it’s always dark and one has to move by feel. Though local children will definitely disagree with that as investigating the space is their favorite thing. The girl is willing to leave a commemorative inscription on the wall. Everyone enjoyed taking part in our photo session. Look how the column is decorated. The large blue tower in the central city square was supposed to be a minaret, but the Khan died and the succeeding Khan did not complete it, perhaps because he realized that if he would complete it, the minaret would overlook his harem and the muezzin would be able to see the Khan’s wives. Construction was halted and the minaret remains unfinished to this day. Swallows live in the walls. Gas pipes on the roof. The wall is not made of clay but is just covered with it. There is brick laying inside. Narrow streets of the city. Some pictures of the night Khiva. 7 thoughts on “An Ancient City Of Uzbekistan”