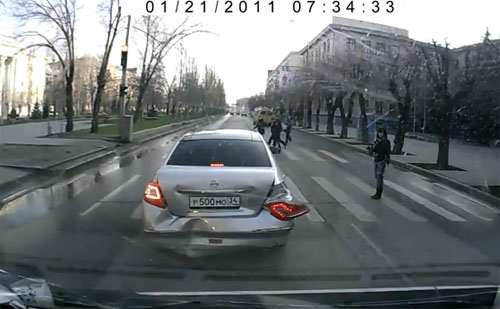 Learning to drive and can’t wait for getting a driving license? Be ready to get tested by experienced drivers on the road.

A taxi bus driver from Volgograd got sick and tired of the fact that other less experienced drivers were not careful enough and forgot to follow the road safety standards. He installed a dash camera in his car in order to obtain evidence that it was not he who must be blamed for the road accidents. “Crash test with KIA RIO”

In spite of the fact he followed the road safety standards it should be mentioned that he was not willing to give way to those who weren’t that particular about observance of the rules. The driver who participated in over than 6 accidents added the videos to YouTube where it’s recorded how he bumps into other cars hitting his own car badly. “Crash test with VAZ-12”

He also started a red-hot debate in the course of which people discussed if the driver was right or not behaving this way. Another surprising thing was that the passengers of the taxi bus didn’t mind participating in the crash test as no complaint was obtained. “Crash test with BMV”

“The girl was lucky!”

The number of the accidents with the driver’s participation could probably be increased if the information didn’t reach security officials who managed to establish the driver’s identity rather fast. “Crash test with NIVA”

After that the person’s account was uninstalled and debates ceased to continue.”Crash test with NIVA, part 2″.