Those pit dumpers of the Belorussian automobile plant have something pristine in their appearance. It seems that trucks are tiny if you look in a pit from above. But when they come up to your level, that is you who seem tiny and miserable. Only one wheel of a dumper has the man’s height. 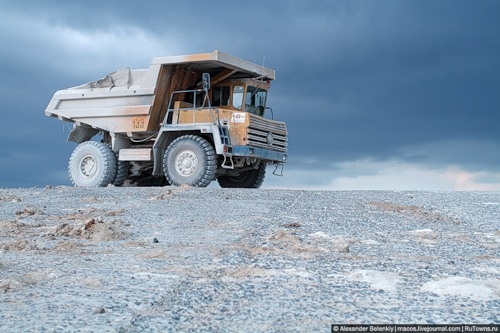 All open pits are strictly secured. A plan for cars movements.

The main rule here is to be afraid of tippers which are called BelAZ. This truck will pass through all roads without noticing any problem. Its average speed is 50 km per hour, it is remarkable that drivers do not feel this speed inside a dumper. For standard passenger cars it is almost impossible to develop such speed on these roads, or stones and gravel would damage a wildscreen or wheels. The village Kransnoselsky has the population of 8 thousand people, most of them work in pits. Being a BelAZ driver is one of the most honorable professions in the village. Only the plant director and a traffic controller have more respect. Get anyone and hold tight! A trip to pits occupies 10 km, but the received pleasure is more than after a drive on snowmobiles or waverunners. A peculiar feature of Belorussian factories is the absence of any fences, nobody forbids to take pictures. The smallest BelAZ vehicles work in Krasnoselsky, they weigh 40 tones and are produced nor far from here. A dumper occupies one and a half federal line of roads, that is why their moving on ordinal roads is paid. When an excavator digs up a hole, there appeares amazing blue water. This plant is about 80 years old. Despite the fact that all this is made by men, fish actively inhabit the water. Unfortunately it is problematic to swim here, the water level is high, banks are too steep. 4 thoughts on “Belorussian Dumpers Come Through the Virgin Nature”