Some coins are total mysteries. Today we’ll get a chance to look at some of them bearing in mind that one day they can become invaluable. Following the Era of the New Economic Policy (NEP) the Soviet Government has made a decision to substitute silver coins by those made of copper and nickel. It was planned to use silver for the purpose of industrialization.
In 1931 the 10, 15 and 20 kopeck coins appeared in circulation. The 1 ruble and 50 kopeck coins were claimed unnecessary. The Russian Mint in Leningrad had imprints to mint the trial 10 and 50 kopeck coins. The coins themselves were not preserved. Still, some years ago the 50 kopeck sample was found in a private collection. It was the only known sample of a coin minted in 1929. In May 2011 the coin was sold to an anonymous buyer who was willing to pay 10 million rubles for it. The cost of the 12 ruble coin is 4.65 million rubles. The Russian Empire was the only country in the world that minted platinum coins for general circulation. The 12 ruble coins belong to the limited edition. They were minted in the 2nd half of the 19th century following the order of rich coin collectors. Only 11 of them were made in 1836.
There are only 11 of them made in 1836. Their price is increasing constantly. In December 2010 one such coin was sold for $96 000.

The 25 ruble coin of 1908, 1.9 million rubles. In the beginning of the 20th century a gold nugget of 5 kg was found in Siberia. Nicholas II, the last Russian Emperor, decided to make golden coins out of the nugget and present them to his relatives and friends during celebration of his birthday in 1908. The 25 ruble coins of 1908 are considered as very rare. One of them was sold in April 2011 for 1.9 million rubles. The price could be much higher if the coin was less damaged. 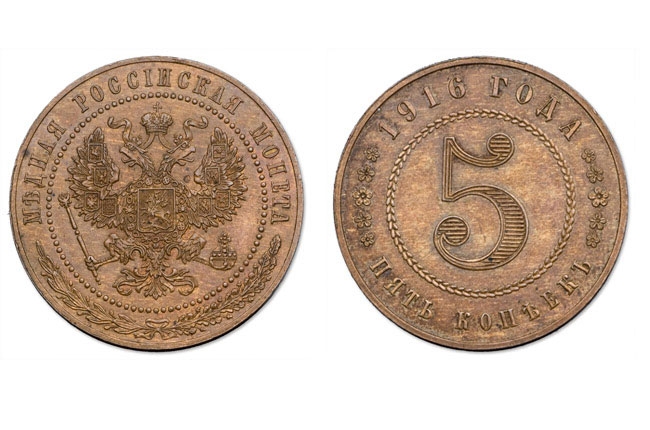 The 5 kopeck coin of 1916, 1.6 million rubles. Trial coins of 1916 saw the last and unsuccessful monetary reform in the Russian Empire. During the World War silver and copper coins came out of circulation. It was planned to make copper coins of newer generation and of a lesser weight as compared to those used before but due to revolution the project fell into oblivion. No one knows how many trial coins were minted that time. The 1 ruble coin of 1705, 1.5 million rubles. Till the year of 1730 Russia didn’t have its own silver and used exported metal to mint coins. In 1704 Peter I put into circulation silver coins which resembles European taler coins. One coin made in 1705 was minted from a Polish taler of 1630 and sold for 1.5 million rubles. 1 ruble of 1861, 1.4 million rubles. Numismaticians can appreciate the ideal condition of a coin and are ready to pay for that. Thus, 1 ruble coin proof made in 1861 was sold at the price of 1.4 million rubles. Over 70 000 of coins were minted in 1861 and just some of them are considered proof or ideal. 5 thoughts on “Treasures Of Coin Collectors”