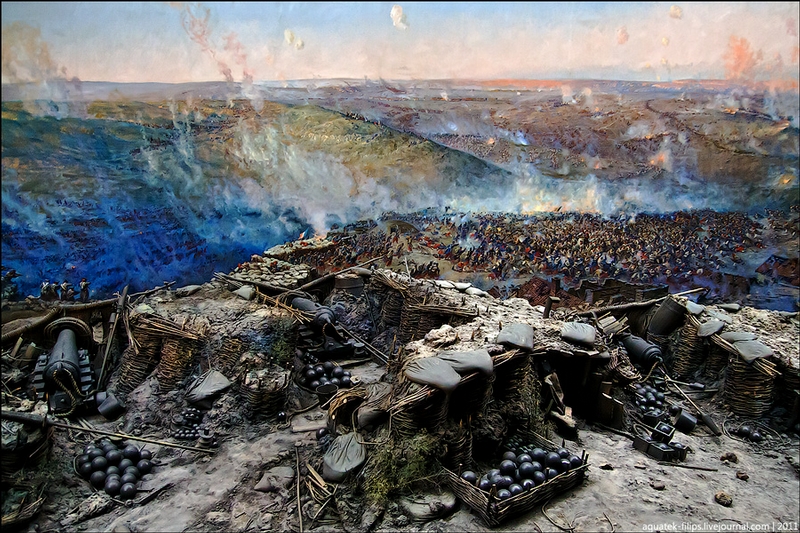 The panorama of the siege of Sevastopol in 1854-1955 tells the story about the 349-days heroic repelling the enemy’s storm. The author of this panorama is the founder of Russian panoramic art, Francis Rubo (1856-1928), the professor of a class of battle painting in the Saint-Petersburg Academy of Arts and then the real member of this academy. The panorama was opened on the 14th of May, 1905 in honor of the 50th anniversary of the great epic. An original round building with a dome crowned with a rotunda was constructed by the project of the war engineer Enberg and the architect Feldman. Its diameter is 36 metres, the same is the height. Inside the building there is a pictorial canvas amazing with its dimentions: 115 metres in circumference, 14 metres in height, and 1610 sq.metres in area. The panorama shows the battlefield of tens of kilometres, many war episodes with enormous number of participants (more than 4,000 figures are present on the canvas. Soldiers and seamen in the foreground are the main force of the town defence.

By the author’s message spectators find themselves in the Malakoff barrow in the morning of the 6th of June, 1855, in the day of the storm. It was the area where decisive events took place. The English and French armies stormed the town exactly in that day. Eight English and French divisions with the total strength of 43,000 people attacked Sevastopol fortifications defensed by 23,ooo of Russian soldiers. The panorama depicts the very height of the fighting. The battlefield covered with gunpowder smoke is seen in several kilometres. French troops, soldiers in blue uniforms attack the Malakoff barrow. Nikiforov’s batteries meet enemies with gun and rifle fire. Soldiers of the Poltavsky infantry regiment are located in the rear, Severyanin’s battery-on the foreground. The signal post of the Malakoff barrow. The red flag ( it is not seen on this photo) is raised as a symbol of the general danger. A dugout for soldiers is on the right, landscape of the barrow with cast-iron balls is on the left.

A girl with a yoke is Daria Sevastopolskaya, one of the most famous characters during the siege of Sevastopol. She was an orphan who one day sold her house and all other properties to buy a horse, a carriage, many quilts, white materials and bottles of vinegar and wine. Her neighbours thought she had gone mad, but in fact Dasha only decided to come to the front and help soldiers. She became the first military nurse. Dugouts where soldiers spent their short minutes of rest. 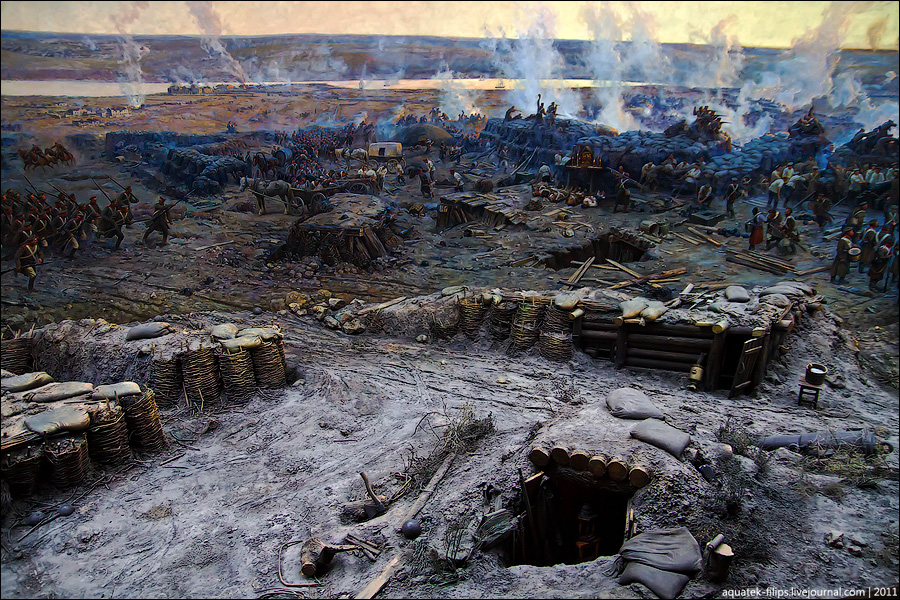 In the right part you can see a medical carriage and dead defenders with funeral candles. Besides battle scenes everyday details are also taken into consideration. The ordnance is made from wood, shells – from plaster or papier-mache. This cross of shots symbolizes the place of vice admiral Vl. Kornilov’s death. Click on the picture to see full scale panoramic image.

During the Second World War fascist bombs destroyed the building of Panorama, the unique picture was burning. Risking their lives Soviet soldiers carried out a part of the canvas.

After the war the panorama was recreated by Soviet painters. The art group of 17 people was headed by academic Yakovlev, then by academic Sokolov-Skalya. Painters studied thoroughly all details of this historical event, remained frangments of the picture, old photos and booklets. Only then they repainted the canvas and recreated all subjects. The intense work was over by the centenary of the first heroic defence of Sevastopol.