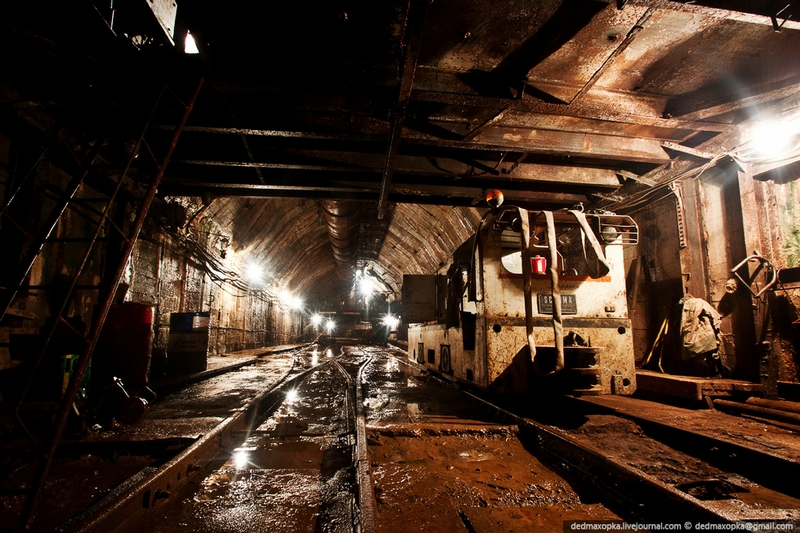 This is how everything is at the moment.

The need for a subway at the growing city of Krasnoyarsk was put up in the 60s.  But the master plan came out in the 70s. In 1983-84, the decision was made and the transport scheme was created. Feasibility studies for the Krasnoyarsk subway were conducted but were halted in 1989. Design work was resumed during the Post-Soviet Russia in 1993 and by 1994, the technical project of the first phase of the first line was evaluated and approved by the State Construction Comittee of Russia. Preparatory and capital drilling works began in 1994. Direct construction – “when the first bucket of earth was pulled out” – began on October 17th, 1995. At the “Revolution Square” station work began on January 30, 1996. By 2003 , the trunk had passed the desinged depth of 71.2 m. On the surface, temporary structures and equipment necessary for the work  had been put up. On the site, drilling and tunneling was done for the construction of a “pumping chamber” and a bypass tunnel. The Locomotive Cab. On the dashboard were all sorts of funny and positive inscriptions. Funny how these Krasnoyarsk diggers can be.

Work on the Vokzalnaya station began on August 19, 1996. But due to inadequate funds it could not be completed by 2003. It had passed the 69.4 m design mark by then. A metering chamber and an underground bunker store were constructed. By then the tunnel boring machine was already underground! On a lighter note, another inscription saying “let there be no subway.”

In 1998, funds became inadequate. Allocations from the city’s administration were not coming. In 1999, the situation got so critical that the CEO of the “Krasnometrostroya” – a unit of  “OAO Bamtonnelstroy”- threatened to shut down the water suction pumps. From the tunnel to the trunk.

On December 26, 2001, the domestic KPSCH- 12 Tunnel shield located at a depth of 60 feet on the  second shaft,  started boring leftwards towards the future station of Kupylova Street. This was done, of course, after preliminary work and construction were done. In July 2003 a factory with an automatic rotary line for the production of high concrete blocks for lining tunnels was established in Krasnoyarsk. Equipment was made available by the French firm CBE. The plant produces upto 11 units per shift. Thus reinforced concrete blocks were available for the construction of subways in Krasnoyarsk, Novosibirisk and Chelyabinsk. By this time the KPSCH -12 was already on the 242m mark on the left tunnel. After the mechanized console was installed, the excavation rate significantly increased. Trash and stuff at the workspace.

In 2008 the Federal Government allocated over $28 million for the construction of the Krasnoyarsk subway. Down the tunnel. There is a light at the end. Somehow the saying  is true. In 2009, the construction of the Revolution Square station was halted. The shafts were refilled with sand. Beyond the wooden boards is the earth. On the way to the water suction. Just beyond the Suction area, the explosives storage unit. The cleanest part of the construction site- the Transformer unit This jail-like lift is used by workers to get into the tunnel. In the lift going up. It’s beautiful in the portals. The same goes on for over 1.5 kilometers. 6 thoughts on “Construction of The Krasnoyarsk Subway”