Usually people can easily differentiate between day and night. Still, there can be exceptions. Thus, spending a night at the North Pole doesn’t mean it’ll be dark. The following picture taken at 4 a.m. can prove it. It is known that the North and South Poles have either no night for around six months of the year during summer, or complete night for six months of the year during winter. No night actually means no darkness. When it is always light you never know when it’s time to sleep. You can take a nap for some hours, get up after that and suddenly feel like sleeping for another couple of hours. A week at the Northern Pole is equal to a month somewhere else as one can take a nap for about 30 times a week. It is a picture of the Earth axis which is not the only one as another axis can be found at the distance of 200 meters. The North Pole-38 is a Russian drifting station. Drifting means that an ice-block where the station is located is floating. It is not that one can feel the movement as the vibrations constitute about 1.12 mm a day. Here is how the work at the North Pole-38 can be described. Researchers can be delighted to investigate the North Pole. But far-seeing people know that the place can boast of two things i.e. ice and sky. As researchers are short of entertainment, they concentrate on working.

Watching the reeler can give you an idea of what it feels like to land on an ice-block. You can see a runway the length of which ranges from 6 to 2 meters and a crack in the icy armor. Having dropped a group of polar explorers at the ice the plane got off the ground as leaving it here was too dangerous. And those of them who lack any work suffer the most. Take doctors for example. Microbes that manage to reach the North Pole get bored immediately and die. There are no microbes here. The only things which are present are the clearest air, ice and frost. Doctors are mainly needed here to prescribe something like cremes to prevent skin sloughing. As a doctor has nothing to do he may go and take the readings while measuring the length, for example. As soon as a hydrologist finds out that a part of his work is done he is ready to raise a stink. It offers a nice pastime, by the way.

Some say the place is surprisingly beautiful, others believe that extreme coldness kills the beauty. Once after a long working day explorers left a bulldozer right on the ice-block and decided to take a nap. But the ice cracked and when they came back the machine was drifting far in the ocean. Only in a month the ice block came closer to the station and the polars could get the bulldozer back. Not a bad pastime, again. Free movement across the station is prohibited as the ice can be broken at any time which can be fatal. Dogs are other inhabitants of the station. They are here for the polars’ pleasure. When the people get extremely bored they can have fun by giving the dogs a pat. This is a dog named Dick who lost its mate and brought up its cub by himself. 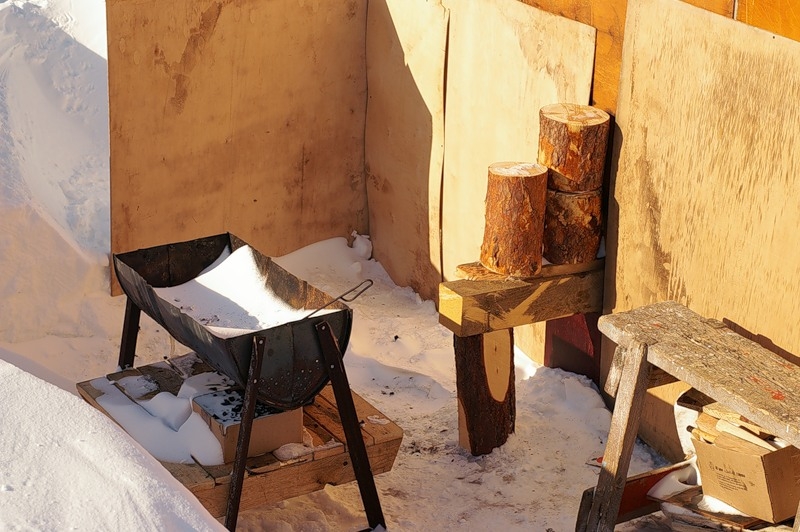 These little wooden logs are delivered by plane to enjoy a hot bath. A bath is taken in a plywood house.

And after that they throw themselves into ice-holes full of salty and icy water. This appliance has no functional importance. It was a gift for someone’s birthday and can turn around the axis.

2 thoughts on “Spending Time At The North Pole”