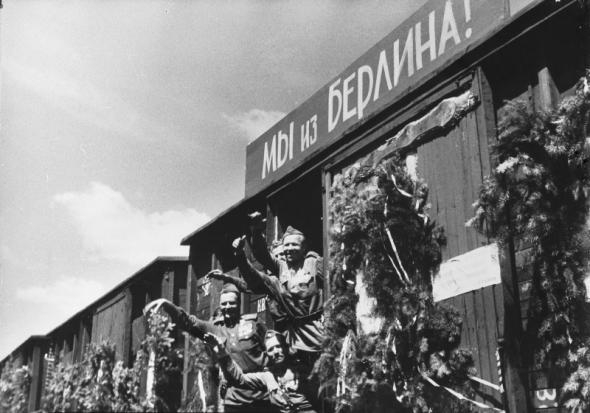 When World War II just broke out, the Germans didn’t expect at all their enemy would resist so much. Their soldiers, brave, initiative and dedicated, faced the great endurance and incredible strength of the Russians. But not only these qualities helped the latter win the war….

Here’s what German soldiers said about their enemies. “The Russians held themselves with unexpected firmness and perseverance, even when they were bypassed and surrounded. In this way they won more time and drew up more and more new reserves for the counter-attacks from the depths of the country, which by the way were stronger than anticipated… The enemy has shown an absolutely incredible ability to resist.”
/ General Kurt von Tippelskirch / “The Russian remains a good soldier everywhere and in all circumstances…
Field kitchen, almost sacred in the eyes of the soldiers of other armies, is just a pleasant surprise for the Russians, and they can spend days and weeks without it. The Russian soldier is completely satisfied with a handful of millet or rice adding to it what nature gives him. The soldier of the Russian army is an unsurpassed master of disguise, self-entrenching and field fortifications… The strength of the Russian soldier is due to his extreme closeness to nature. For him, there are simply no natural barriers: in heavy forest, swamps and marshes, in roadless steppe – he feels like home everywhere. He crosses a wide river using the most elementary improvised means and can pave a road everywhere. It takes few days for the Russians to build a many-kilometer causeway through an impassable swamp.”
/ Major-General von Mellenthin / “Widely and skillfully conceived operations of the Red Army led to numerous encirclements of the German units and destruction of those who resisted.”
/ General Otto von Lasch / “Their commanders instantly learned the lessons of the first defeats and in a short time began to operate surprisingly effectively.”
/ Field Marshal General Georg von Kleist / “The fact that the Red Army soldiers continued to fight in the most hopeless situations, totally unconcerned about their own lives, can be largely attributed to the brave behavior of commissioners.
The difference between the Russian Imperial Army during World War I and the Red Army in the days of the German invasion was simply colossal. During the last war the Russian army was more like an amorphous mass, physical inactive and devoid of individuality. This time, the spiritual uplift caused by the ideas of communism already started to affect them in the summer of 1941.”
/ General Eric Rouse / “Many of our leaders greatly underestimated the new enemy. This happened partly because they knew nothing either of the Russian people, or even the Russian soldiers. Some of our commanders were always on the Western Front during World War I, and never fought in the East, so they had no idea about the geographical features of Russia and the persistence of the Russian army. At the same time they ignored the repeated warnings of prominent military experts on Russia…

The behavior of Russian troops, even in this first battle (for Minsk), is strikingly different from that of the Poles and the troops of the Western Allies in defeat. Even being surrounded, the Russians did not depart from their borders.”
/ General Günther Blumentritt / 32 thoughts on “Soviet Soldiers As Nazis Saw Them”