The explosion at the Chernobyl NPP on April 26, 1986 changed the course of history and plunge the world into shock. After the accident, the residents of nearby towns and villages were evacuated, and the settlements became abandoned. A generation later, the Chernobyl exclusion zone is still difficult to access, confusing and scary for most people but not for those who decided to return and whose life goes on no matter what… The liquidator of the disaster Leonid Budkovsky and his grandson Slava. “When the accident happened no one knew how serious it really was. We did not wear special clothes,” he says. Leonid gained health problems in 1992, and by 1996 he had been confined to a wheelchair. “I’m 55 years old, and no one needs me. I can still hold a spoon, but I need help to go to the bathroom and I am forced to use diapers.” Igor Pashinsky’s son-in-law eats currants right from the bush in Korosten. More than twenty years after the accident, nearly half of 46.000 inhabitants of Pripyat still live in the Desniansky district where they are struggling with health problems and unemployment. They don’t get any support from the government and live in overcrowded apartments. It’s a usual picture when three generations of families live in tiny two-room apartments. Evening. The workers of a train station go home on foot. Slavutich is a new town built after the accident specially for those who were evacuated from Pripyat (an abandoned town in the exclusion zone). Almost 4.000 out of its 25.000 residents still work at the Chernobyl NPP. Slava Danilov is a medical researcher who works at the Chernobyl NPP. He lives in Slavutich together with his son Ilya (one of his eight children). Every Saturday Danilov goes to the bathhouse. In total, about 3.800 out of 24.300 residents of Slavutich work at Chernobyl. Victor and Lydia Gaydak in their apartment on the outskirts of Kiev. Victor had been working at the Chernobyl NPP for 24 years (including 9 years after the catastrophe). In 2004 he underwent a serious operation for colon cancer. “When I was ill with cancer, we had to sell our car to pay for the operation. We also sold a TV set, a refrigerator, jewelry… Well, everything we could. Now my wife Lydia is too ill with cancer, but we have nothing to sell anymore. ” says Victor. Many of the former inhabitants of the Chernobyl exclusion zone moved to this area. The photo was taken on the streets of Ivankiv, the radiation-affected area near the Chernobyl NPP. Outside the 30-km exclusion zone (where almost no one lives) is a lot of small villages where land was also exposed to radioactive fallout. But people continue to live here even despite the increased prevalence of serious diseases, including cancer, and a small pension they receive from the government. An abandoned bus rusting in the woods near Lyutezh, the south of the Chernobyl exclusion zone. Tourists taking pictures of the Chernobyl NPP, the place of the most serious nuclear accident in the world. Vasily shows the tattoo of his wife Natasha who died seven months ago (in January of 2007), a few days after her forty-sixth birthday. Natasha died from cancer after a long illness. “I was born here and I will die here. I already want to die,” says Vasily. “Excuse me, I’m drunk. I drink a lot now. We have only what God gives us, our health, our home, our friends.” Vasily lives and farms on the outskirts of Ivankiv, the closest to the Chernobyl exclusion zone inhabited city. The dance and music teacher Lesya Kostenko conducts classes in the Chernobyl Community Center in Borodianka. Her students (3 girls in the picture) are all 14-year-old girls from a neighboring village. Borodianka is a small town with the population of about 16.000, located 77 km south of the Chernobyl NPP. A filling station on the outskirts of Ivankiv on the way to Sukachi. People of Sukachi celebrate the birthday of the village. Children and local musicians take part in a concert during which some residents are awarded certificates for their achievements. Employees of the grocery store built out of an old trailer fill the shelves with goods in the center of Sukachi. The photo was taken through the window of the trailer. Father Nazary Momotyuk holds a service in a small Ukrainian church in Sukachi. The church had been under construction for a decade, but then the villagers scraped together enough money and continued its building. Due to the fact that the church is not yet finished, it is decorated with posters, and fake icons. Slava Danilov eats lunch alone in the cafeteria “Island” at the Chernobyl NPP. Tanya Bokova and her husband Sergey Bokov live in Slavutich and work at the Chernobyl NPP. Tanya was born in Pripyat in a family of atomic scientists. Now she is an administrator at the plant and her duty is helping to manage the process of its decommission. Sergey works as an engineer in the department of disposal of liquid radioactive waste. Workers pass through the checkpoint every day before they get on a train and go home. Tanya Yevteyeva and her husband Edward live in Slavutich with four of their five children. Tanya works at the Chernobyl NPP as a cleaner at the facility where employees dress in working clothes. Edward was forced to leave the plant after he had been diagnosed with cancer of kidneys and undergone an operation. He now works in Slavutich as a manager of the Chernobyl training center. Their elder son is 22 and he works at the Rovensky NPP. 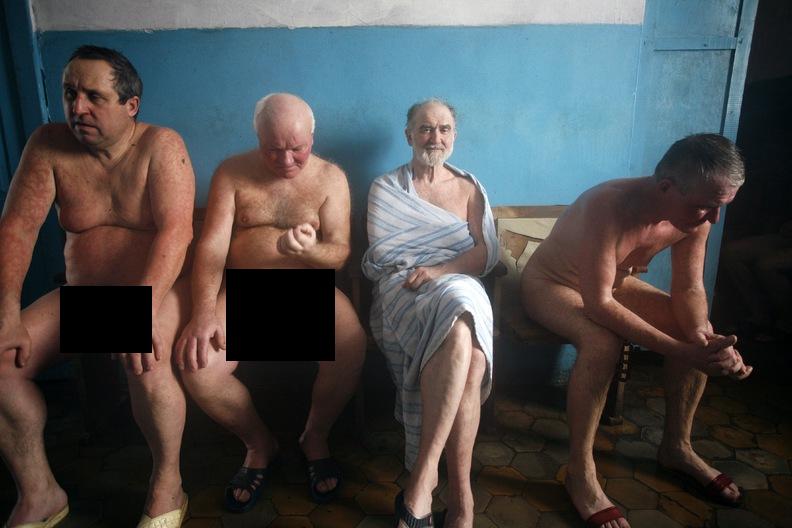 Children of an orphanage receive charitable aid – clothes from the members of “Associacion Valles Obert”, Barcelona. Young dancers wait for their performance behind wings during a concert. The auditorium is packed. The event was organized by the music school of Slavutich as a reprise of their successful concert in Kiev. Sasha and Lyuba Boychuk watch an entertainment show on TV during the New Year celebration. At the time of the accident, in 1986, Sasha and Lyuba just started to build this house. Then Sasha worked as a liquidator of the accident. After that he began to drink heavily. He blames himself for the death of his son who disappeared near a local bar and is believed to have been killed during a robbery… 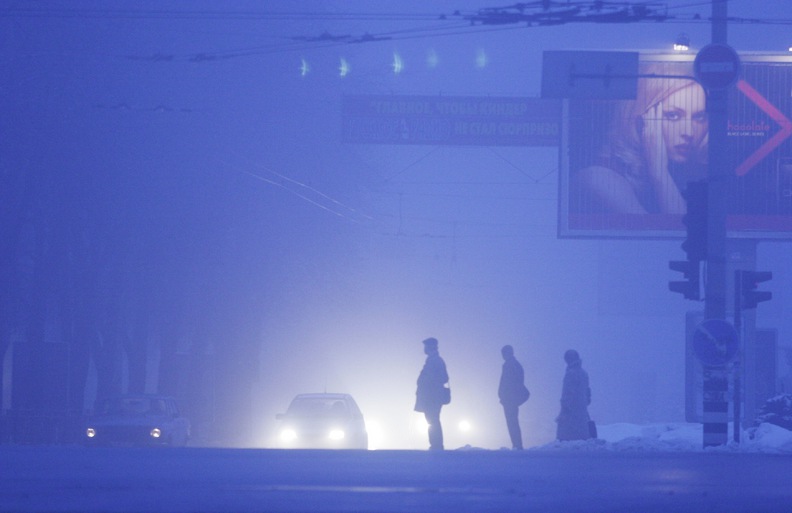 Warm winter morning. People stand in the mist at a metro station in Kiev. Outside the Chernobyl NPP the current radiation level is 20-30 times higher than normal. The exclusion zone with a very high level of radioactive contamination covers 819 square kilometers. In total, about 56.700 square kilometers of the territory of Ukraine, Belarus and Russia where live up to six million people are contaminated by fallout.