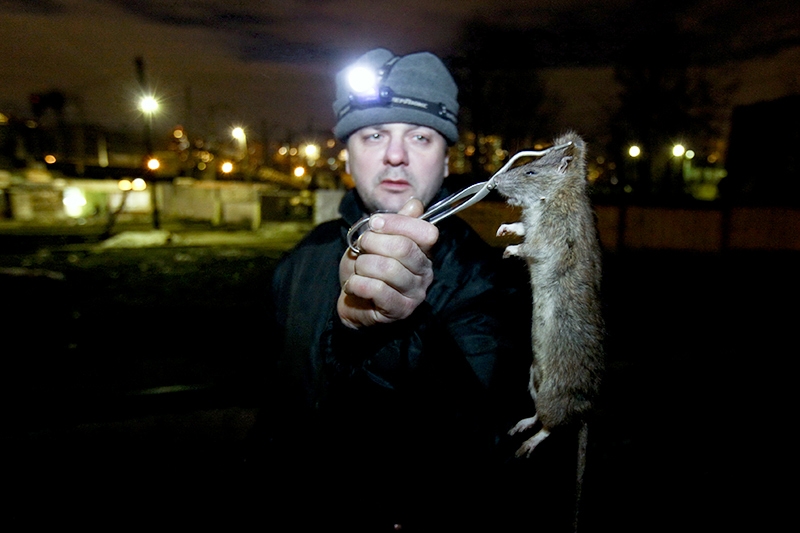 Gennady (Surname withheld)Â , a forty-seven year old worker who lives in Moscow combines a hobby with a goodwill hunts for rats. Â Armed with a pneumatic sniper-rifle with a laser aim and silencer, (that costs over 3400 USD) he sets out in the evenings to his hunting grounds- in his case to the city streets. Being a former duck-hunter, he Â started hunting for rats after another hunter shot him in the leg several years ago. He boasts of having shot dead a total of seven hundred thousand rats for a period of seven years. Gennady knows the Â best hunting spots for his activity. Rats are easy to find in garbage collection sites. Even though rats are considered to be cautious rodents, city rats do not even fear people – like this one in the above photo does not even fear the flash of a camera. According to Gennady, rats can attack humans. They mainly attack the sick and kids. As he takes on his activity, the hunter is so careful not to get caught by the police. He has taken the character traits from the rats. Careful and alert always. In case a passer-by or a vehicle goes by, he quickly hides his gun in its case. The hunter in action. He says that the rats mainly make their nests along the garbage. But they can also go through the sewage pipes and get into apartments through the water closets. On top of that, the experienced rats pass this knowledge down to the younger ones! Rats and the fleas they carry spread over twenty diseases to humans. Among them Salmonellosis, various skin diseases and fungi related diseases. Â Cats in the homes can get infected from the rats and in turn spread diseases to their owners. This makes the hunter’s activity a good cause, a way to keep people free from disease. Here this rat is under gun point. In a few seconds it will be dead. His hunting experience and the laser aim come in handy for Gennady making him an excellent Â hunter. Laser aims are good for hunting. One rarely misses. There it is, the result ofÂ  experience and technology!Â In case at a given point a lot of the rats are shot dead, they tend to move away to other places. Only in Moscow there are over four hundred rat-snipers. And women among them. Apart from rat-hunting, people also engage in crow-hunting. After clearing a spot, the sniper always marks his territory. Just the way traditional hunting has always been done.

Via My Region Newspaper

10 thoughts on “The Rat-Sniper From Moscow”