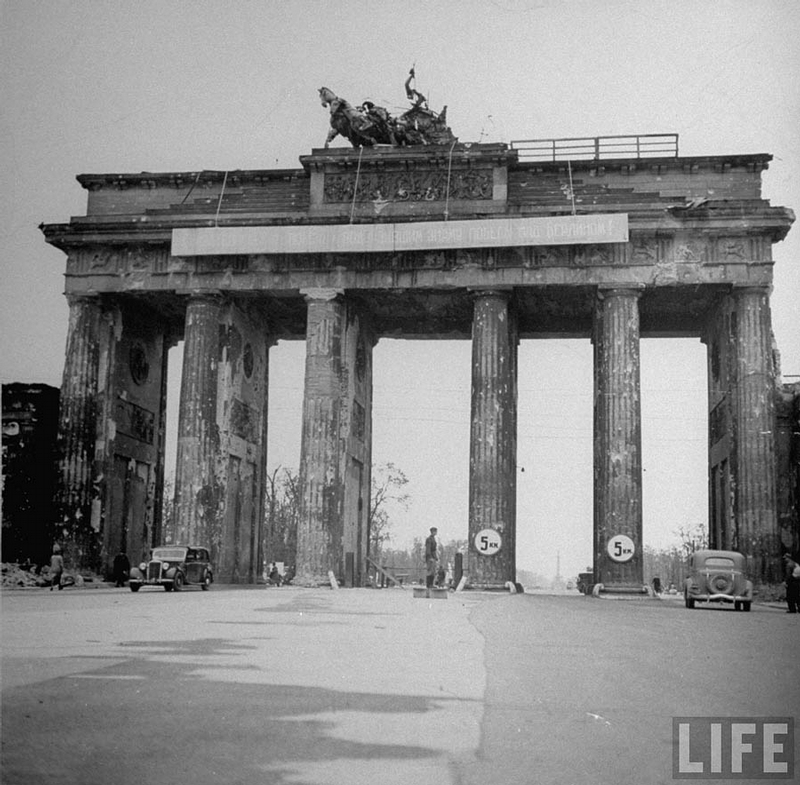 Here is a collection of goodies from the Life archive – the shots of Berlin made by an American photographer William Vandivert in May-July of 1945.

These photos of high quality are especially valuable because they carry minimum of propaganda and simply show the state of the city at the time when the rigid order of the Cold War hadn’t yet been established, and the borders could be freely crossed by everyone… 1. A well-known photograph of the Fuerer made on the 20th of April in 1945 where he gives the Iron Crosses to the young boys from the Hitler Youth. This picture was previously a part of the unique photographic collection of Hugo Yager and Henry Hoffmann. The latter was Hitler’s official photographer. The picture was taken at the back wall of the Reich Chancellery. 2. Karlshorst. The evening of the 8th of May, Field Marshal Keitel (with a rod), Stumpf of the Luftwaffe, and Admiral Friedeburg come into a hall for signing the surrender document. 3. View of the Reichstag from the edge of Tiergarten. The highway leads to the Brandenburg Gate (but it’s on the right and not visible). As you can see, the area is already demined, machinery lie on the edges of the road, and civilians walk along the sidewalks. 4. The Reichstag, one of its outer colonnades. 5. Here the inscriptions are a bit larger and can be easily read. Look, there are many cities – Kiev, Leningrad, Michurinsk, Kharkov, Batumi, Moscow, etc. 6. Inside, the walls of the Reichstag were painted too. Apparently, no free space left for soldiers’ autographs outside caused them to use the inner walls. 7. The Brandenburg Gate, two months after the end of the fighting. The place is already cleared from the rubble, a fence for patrol is organized in the central passage and the other ones (two on the right and two on the left) are used for movement. The speed limit is 5 km/h. It’s also seen that horses at the top are partially damaged and knocked down. The zone border is precisely here, in front of the gate. 8. The dilapidated Kroll Opera House. Berliners collect firewood (wood debris) and put it on a cart. For what they need wood in July is unclear. 9. Now let’s move to the south from the gate. Here’s the snapshot of the dilapidated U.S. Embassy. 10. Not reaching Potsdamer Platz, turn to the left onto Fossshtrasse, pass it and you’ll find yourself at the Old Reich Chancellery. As you can see, it is greatly destroyed, even despite the fact that it was occupied by the Germans till the very moment of garrison’s surrender (on the 1st of May). Nobody knows if it was destroyed by air raids, large or medium caliber shells. Behind it, there is the entrance to Hitler’s bunker. 11. View of the Reich Chancellery garden which also turned into a desert. Though the rotunda remained intact (it will be demolished later, in 1948). If you walk through the garden to the north, it is possible to come exactly to Adlon and the Brandenburg Gate. The entrance to Hitler’s bunker is on the right and is not seen in the photo. 12. The photo shows one of the rooms of Hitler’s bunker which was in the Soviet zone of occupation. A Soviet soldier wearing a Red Star order and a medal poses for William Vandivert. 13. Near the Reich Chancellery. Soviet soldiers drove a car toward the stairs, and load it with something (possibly, that same eagle). Broken parts lie around. A soldier poses standing on the downed eagle with a swastika. In the background – a lot of broken machinery. A dandy in a civil suit stands in the body of a truck. 14. In the garden of the Reich Chancellery. The terrace of the Diplomatic Room is visible in the background. Allies (Americans) poke around in the ground and examine something. This is the trench where Kempka burned Hitler and Eva Braun’s bodies. 15. The main building of the Gestapo. Later it will be exploded, and the Wall will be constructed here. Now the Topography of Terror is located here. 16. The Wilhelmstrasse. The Ministry of Propaganda surrounded by a strong stone fence. This is also the Soviet zone of occupation, and it was a big risk for the reporter to walk around here. 17. One of the entrances to the building of the Ministry. 18. The Life captured this picture as “near the Ministry of Propaganda” but they somehow turned out to be mistaken. This is a different place. In the background is Shaushpilhaus on Gendarmenmarkt. All the crumpled vehicles are pulled to the edge. 19. The State Opera on Unter den Linden is too the Soviet zone of occupation. It’s intact for the most part. 20. Actually, this session contains quite a lot of views of perfectly whole neighborhoods of the city which were more lucky than its center.