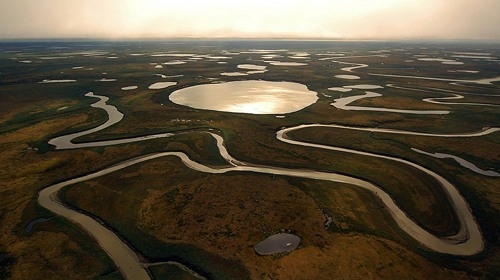 Salekhard is the Russian town and the administrative center of the Yamal-Nenets autonomous okrug. It is located on the Yamal Peninsula. Somebody considers that it the only one city in the world located on the Polar circle. This city is also famous for its beauty of the surrounding wild nature. A view on the river Ob from an aircraft. The monument to a mammoth. A view from train windows. The northern Urals are seen in the distance. Trains move with the speed less than 40km per hour in order not to make destructive vibrations. The only transport able to go through such roads. A trip from Salekhard to Moscow by a helicopter takes 2 hours. The monument indicates that the town is located on the Polar circle. The airport in Salekhard.

10 thoughts on “A Trip To Salekhard”