A curious experiment. Today’s children talk about old things which were actively used by representatives of older generations in Russia. 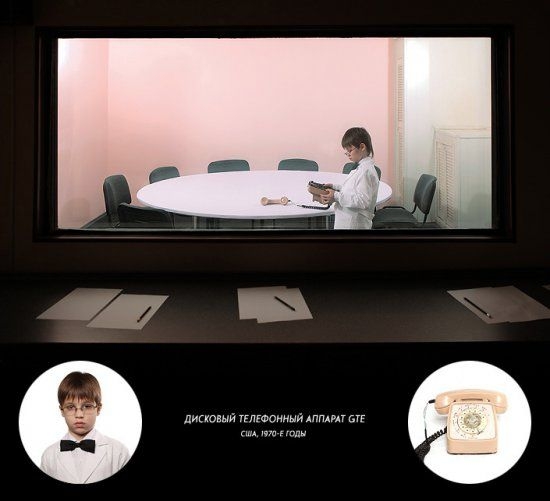 Mathew, 8 years old: “I could not understand for a long time how to dial a number on this machine, because I had never seen it before. I tried to call home but all the time I got the wrong number or heard the busy tone. I was confused with the fact that there were no buttons on the phone. I also tried to text several times but then I realized that it was impossible. Please, can someone explain to me what for are these letters next to the figures?” Yegor, 7 years old: “It is a small radio set. It looks like a little book. The most amazing thing is a small player where cassettes are inserted. It is difficult to find and open it, if you don’t know what exactly this device is for. All this reminds of a music box. It’s rather hard to deal with buttons, but I managed to do it: “Insert” is a right triangle, “Stop” – two vertical lines. But what do the box and the upper triangle in a circle mean? Strange symbols. I see them for the first time.” Vlad, 8 years old: “I have never seen the names of cities being written on a radio set. Moscow, Leningrad, Minsk, Bucharest, etc. Maybe it helps the device to understand what city you are currently in? For example, you come to Prague, choose your location and it finds a local radio station for you. But then I can’t see any reason for going to the other cities that are not on its list (New York, Tokyo, Stockholm, etc.)” Timur, 10 years old: “At first I thought: what a strange device – small, metal and very hot. Apparently, a portable heater. But it turned out that it was the mother of a VCR and a home theater. It’s like a book with pictures on the wall that lights up when reading. We loaded the tape incorrectly, so the image turned out upside down – it’s perfect for babies who see all things upside down till they are 3 months old. A DVD-player, of course, is more convenient but you don’t have to do anything yourself. And here, it is much more interesting. You should load the tape yourself. Unusual.”

Elijah, 10 years old: “A gramophone is better than TV. There is a mechanism by which you can change the speed of the playback of a record. You can increase it for skipping those songs that you don’t like. You can’t do this with TV and radio. Increasing the speed of a record, you can also turn the boring music into funny.” Grunya, 9 years old: “When I picked up the phone, I thought that I hadn’t probably noticed something like a lid with buttons that you should push so that the keyboard popped out. Then I decided that the only thing you could do with this telephone is to sit and wait while somebody calls you. Finally, I remembered the voice dialing on my mobile phone. You say a name and your phone connects you with a desired number. But in this case, it’s a man who connects you. So there is no need for dialing the number yourself. “ Vlad, 10 years old: “It is a means of communication. These lamps are used on the railway in order to delay the departure of the train. I saw it myself when I was on a travel: a conductor turned on such a red lamp, while the passengers were coming out of a carriage – it was a sign for the engineer that he mustn’t start moving. No? Then it’s a lamp that was used to illuminate a room with red light. It was very fashionable in old times. Wrong again? Then I can’t imagine how it can be used. To create images? Well… I know that pictures are copied from a flash card and printed on a special printer in the darkroom. I think, the red lamp has nothing to do with it.” Seva, 8 years old: “This is a special super-powerful calculator for counting very large numbers. It’s so obvious: the larger the calculator is, the more powerful it is. Try themselves: an ordinary calculator can’t add several hundred billions, and this one can! But I don’t quite understand how it can be used at school during the test: even if you can secretly bring it to the classroom and connect it to the outlet, it will still be heard as you type.” Zhenya, 10 years old: “The most striking thing in this typewriter is the fact that its entire mechanism is outside. Working on a computer, we have only a screen and a keyboard in front of our eyes, and here I can see how it works, how the letters are printed. What is more unusual is that a sheet of paper is always on its top. On computer, we do not have to change the sheets, just open a new page. The only thing I can not understand – how to switch to the next line. Where is the “Enter” key? » Andrew, 10 years old: “This device is ahead of its time. There is not a single wire in it! You should just twist the knob and listen. Almost like a perpetual motion machine. After some time, you should twist it again, but it plays for a rather long time. It’s much better than just pressing buttons. The most amazing thing is a suitcase with a player. How was it possible to put it there? And where does the sound come from? And why? I looked at its sides, its front part, but did not find any dynamics. “ Arseny, 7 years old: “I would like to use this device every day – this radio set is much more convenient than usual contemporary radio sets. It is big, one can even draw on it. There are probably some special spinning gears inside that are powered by electricity. In former days, electricity was expensive. I have a radio set, but it is uncomfortable: headphones fly out of my ears all the time. Headphones are not needed here, everything can be heard without them. It’s hard to tune it. But I always like when I need to tune something. The more complicated, the more interesting. “ Timothy, 8 years old: “This TV set is simpler than modern. My TV set has only one button, the other ones are on the remote control. Once I lost it and could not change channels. I had to call my mother to know where the remote control was. Though this TV set has no remote control at all (it hadn’t been invented yet), it has a system with six buttons. To setup more channels, you only need to turn a special wheel. An old game console is much easier to connect to such a TV set than to a new one. PlayStation has a lot of wires that you have to unwind for a long time and then insert into different holes. And here is only one option.”

3 thoughts on “Through the Eyes of a Child”