Recently there have appeared many interesting outdoor ads in Russia. Though their performance is often very lame and ideas are not always original, such advertising is certainly an example of Russian creativity which arouses passers-by’s interest and smile.

This billboard advertises a Russian fantasy film “Day Watch”. In the daytime it looks more like a common poster. But at night the dark figures become very well seen.

This is one of the most successful teasers of Russia. At first there was only one inscription on the billboard which said “Hijacked?”. Once everybody was intrigued, there appeared another one “You should have put the Clifford car alarm”.

One more example of unusual outdoor ads. The billboard is combined with the device spraying water. The characters of the ad, young rogues, shamelessly douse visitors of the park with water.

The billboard advertising the Calve ketchup.

And this billboard performs 2 functions at once. It advertises the tools of the company and makes a not very beautiful wall look as a part of the billboard.

Some creative billboards of one Italian restaurant.

In 2008 the BMW company used the largest advertising platform in the country – a construction fence around the “Russia” hotel. Three-dimensional models of the BMW cars of original size were used here.

Transparent stickers with a picture of the LG TV-sets were pasted to the windows of the waiting rooms and cafeterias of airports.

Business newspaper “Vedomosti” (“Gazette”)  launched an advertising campaign called a “Million reasons to read Vedomosti”. Dozens of money boxes appeared on the streets of Moscow, in its business centers and malls.

Last year the new men’s fragrance turned the bus stops of Moscow into the gyms.

The Coca-Cola company decorated the bus stops with icicles when summer was in full swing. The picture says: “Refresh yourself”.

Boxes filled with tomatoes and packages of ketchup advertise the Calve production.

The advertisinf campaign of the “Old Miller” beer turned the Moscow bus stops into the football goal.

The ad of some online store of cosmetics. “Remedies for tired legs”.

A very creative ad of the Milka chocolate accompanied by the slogan: “Milka. One piece – and you are in the Alpine world. “

The Alpen Gold chocolate too used such kind of advertisements later.

And this is an advertising campaign dedicated to clean streets. “The family of two cans wants to rent a garbage can. Cleanness is guaranteed.” “Garbage has home”. “Don’t care?”

“Beauty is in the foreground”.

In autumn 2009 a giant bottle of 12 meters in height filled with wrecked cars was installed in Moscow. That was a symbolic monument to victims of drunken drivers.

The Peugeot logo was trampled in the fields of the Kaluga region.

An unusual ad of Kia Cerato. The car slowly moves up and down beating the ball into the goal.

The campaign called “Metal Lion” has landed Peugeot in the cage of the Moscow Zoo. Everyone could not only see the car, but also to sit in it enjoying the benefits of this model.

As soon as it becomes dark in Moscow, a giant heart began to beat inside the new Mirax Plaza complex.

An unprecedented heat wave that took place in Moscow in August last year inspired Mirax Group to create such a thermometer on the Federation Tower – the tallest building in Europe. 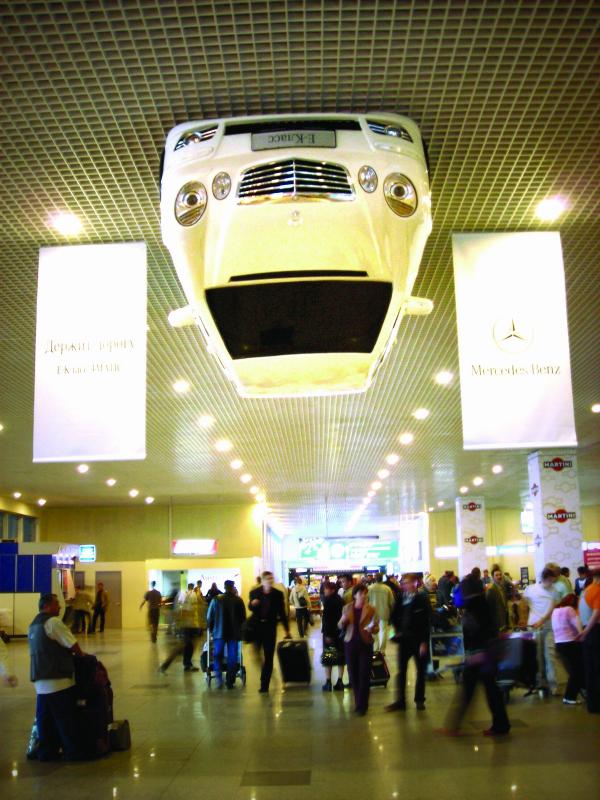 In 2007 an unusual ad appeared in Domodedovo airport. It was made in a form of the Mercedes-Benz car mounted on the ceiling.

22 thoughts on “The Most Creative Ads of Russia”