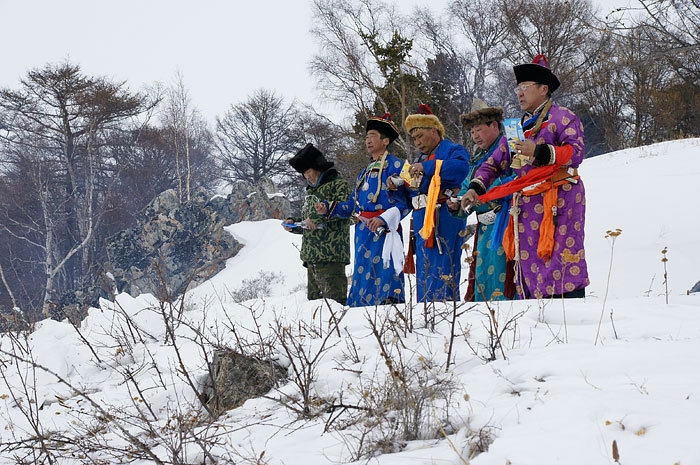 These 5 people at first sight looked like ordinary Buryat men, but after they changed clothes to these bright costumes and began doing strange things it became clear – they are the very shamans of Buryatia… This guy was a driver who brought the others to the sacred place, but he took part in the ceremony too. After the “reincarnation” the shamans unpacked “the shaman’s kit” – bread, cookies, cheap candies, cigarettes, tea, vodka, milk and stuff like that. They also said that everybody can get  such a kit in any shop without any explanations. They put bread, cookies, candies and tobacco on a big plate – as a gift to spirits… After that they drew round the fire, circumambulated it, “fed” it with milk, vodka, tobacco and melted butter. They also spoke something very quietly. Then the shamans threw their bowls on the cliff and cleaned them up. They fired another fire and put there a few omuls – another gift to spirits. Finally they took a tambourine, carried it over the fire and the elder shaman began singing and playing it very softly. Everybody closed eyes. Later they explained that they “saw different things” while the shaman was playing and singing. One said that he saw “horsemen on camels and striped horses waking across Baikal”… Everything ended quite ordinary – they sat down round the fire, had some milk and vodka, ate a little rice, than changed their clothes back, went to the car and drove away.

10 thoughts on “Shamans Of Buryatia”