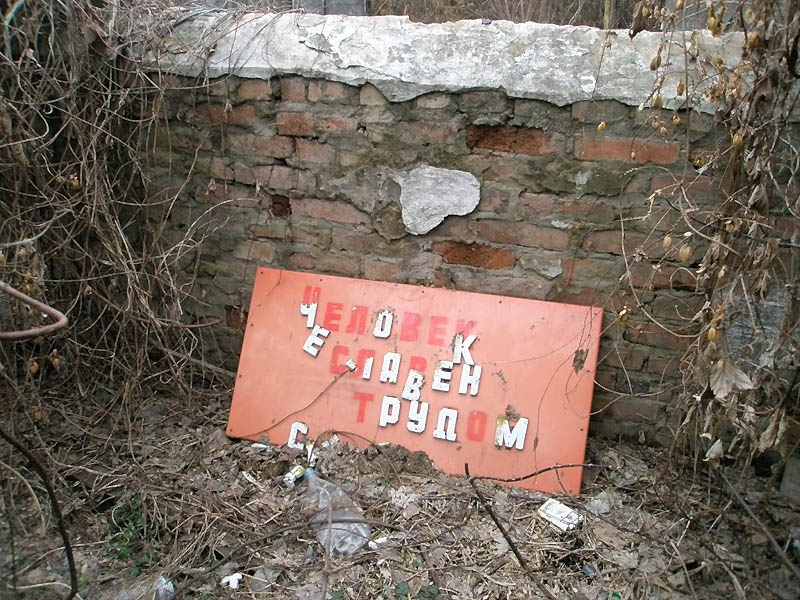 A curious series of photographs from Donbass. Let’s see what really happened to one of the most prosperous industrial regions of Ukraine. These are a few pictures from Shakhtersk – a typical town of this region. Before 1953 Shakhtersk used to be called Katyk. They say, it literally means ‘dirt’ in the Tatar language. But some assert that it was named after the person who founded it. Well, one doesn’t exclude the other.

This used to be the local brewery. As it happens, beer produced there was really nice. Unfortunately, now it’s the territory of a building materials market… This one is a grotesque picture: under the proletarian kind of writing saying “Miner” one can see a local casino. Now this building constructed in Stalin times accommodates an amusement arcade, do you think he would appreciate it? This one looks awfully optimistic – “RUSSIA”. The only thing it lacks is a black frame and some political statement. A typical monument of a miner in a town the name of which has the root ‘miner’ in it. This is Artyomovo which is in fact a part of the town called Dzerzhinsk. This place looks a bit gloomy: there are lots of coal mines here, some of them have been closed down a long time ago. Frankly speaking, such mine locations are the most undesirable to live in, naturally after the Chernobyl zone. Here people have a special, tough kind of character due to their occupation; besides there is lots of dirt and ruins. Though, pictures demonstrate everything too well.

As for Dzerzhinsk, it is a tiny town, yet a lively one. The local mine is still working. Obviously, there is no proper transport here, neither any regular water supply. But people do live here anyway.