The so-called October Bridge connects two areas in Novosibirsk. This bridge, built in 1951-1955 is the first automobile, tram and pedestrian bridge over Ob in Novosibirsk. Its length is really impressive – 896 meters. 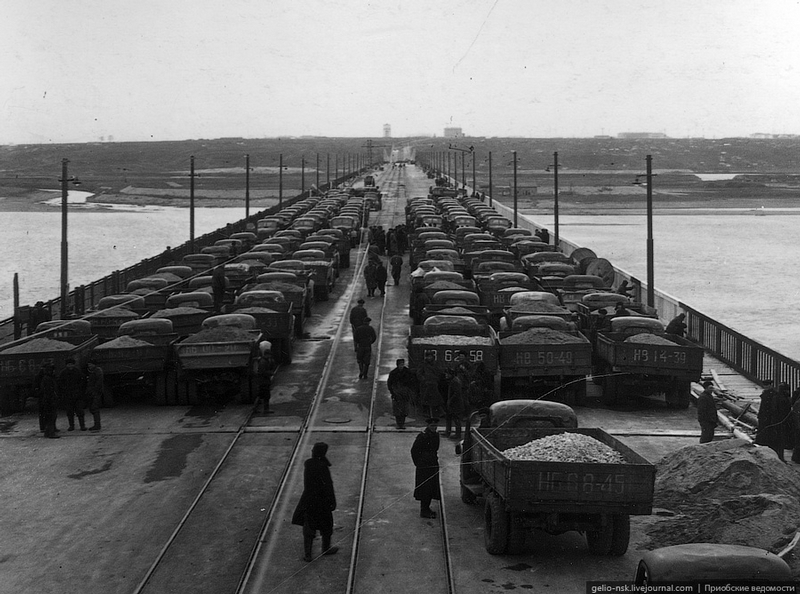 In 1948 the project started, in two years the work on the technical plan and the estimate finished. The main street was supposed to become 3 times as wide for the sake of better transport circulation.

In 1952 the preparatory period began. The workers, specializing in building bridges arrived in Novosibirsk. The construction of a municipal bridge was a tremendously important event for Siberia. Building a dam on the left-hand side. About one million cubic meters of soil was piled up. They were built with the help of caissons. In order to do that little islands of soil were formed; then the piers were sunk into granite and then blasted. The building was based on the reinforced concrete constructions and rose to 30 meters above the sea. In September the biggest pier was poured. At the same time the first 4 bays of the trestle part were finished. The bridge consisted of 4 parts: the pier of the right-hand side of 4 bays and the river part of 7 bays, 120 meters each. The bridge was guarded by the cast-iron railings and the bank piers were lined with the Siberian gray granite. The Municipal or October bridge was opened in 1955 after the 4 years of construction. About 128 million rubles was spent on it. There are two tram rails, two roads for cars and two pavements.  The bridge is 24 meters wide. A curious fact – in 1965 a brave Soviet pilot performed a flight just a meter above the water level straight below the bridge. For this unwary act he was arrested, but soon the minister of defense ordered to let him go. And this is how the bridge looks these days. The pictures were taken in 2010.

6 thoughts on “A Story of One Bridge In Novosibirsk”