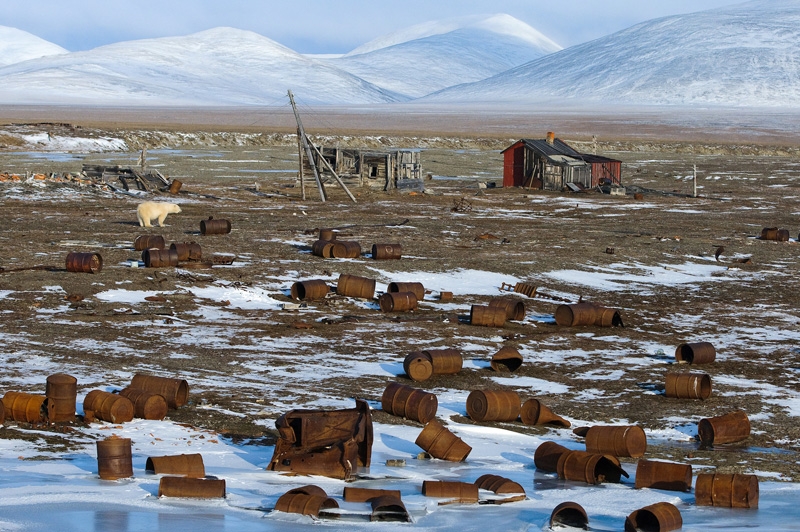 Usually photographers avoid such topics… But sometimes they make an exception to draw attention to the problem and, as a result, to make our planet cleaner.

When you arrive at the Arctic Coast of Russia the first thing you can see is tons of garbage and rusty barrels. Any attempts of industrialization of the Arctic territories have always been accompanied by its terrible pollution. The Wrangel Island, also known as a maternity hospital of the polar bears. Today, safety of the natural resources of this island is provided by the absence of population. But earlier, the government tried to explore new territory using different methods. So a trading station, reindeer farm, military airdrome and anti-aircraft defense base have been built here at that time.

Tons of fuel and lubricants, work equipment and food provision for 200 residents of a small village have been delivered to this place. But then people left it, and all the garbage and idle equipment remained on its junkyards. Sometimes empty barrels were taken out of the island by empty ships on their way home. But that was unprofitable because barrels should have been pressed on the shore before being loaded on the ship. The problem is that there are no presses on the island. All scrap metal is concentrated on the South coast – the very place where all the organizations were situated. Nowadays most of the barrels became worthless but there are still some tonnes of gasoline, oil and diesel fuel inside them. These substances leak from the rusty barrels and pollute soil. But rusty barrels do seem very harmless in comparison with hundreds of radioactive batteries used for powering navigational aids in the Soviet time. In 2004 the Wrangel Island was given a status of the area of World Natural Inheritance but with one condition – to clean the territory from the garbage. The workers of this nature reserve try to clean it by themselves but their efforts are not enough. It does require a lot of money But the most ridiculous thing is that the Wrangel Island wasn’t included into the National Programme of Action for the Protection of the Arctic Marine Environment! 20 thoughts on “Arctic Is In Trouble”