In Kunari village which is in the Sverdlovsk region, there stands a beautiful house. This piece of architectural art was built by one gifted blacksmith – Sergey Kirillov. Unfortunately he died 7 years ago, but those who remember him, say that his soul was exactly similar to this house. Now here lives his wife – Lidia.

Lidia and Sergey married in 1951, and moved to the old house of Sergey’s granddad. When the house began to become dilapidated, Sergey started to repair and restore it. The process continued till his death… Lidia tries to keep the house in good condition, but it’s not easy for her – she is already 78 years old. She also never locks the doors – nobody have ever tried to rob such a beauty! In Ulan-Ude everything is not so beautiful – on Tuesday, the 14th, workers were covering the skating-rink and water suddenly broke through the ice barrier and flooded the streets. 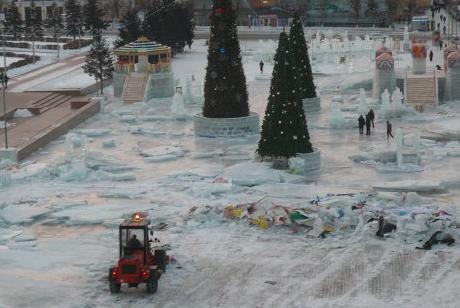 The temperature is extremely high now, so the streets became skating-rinks themselves very soon… More than 70 workers and about ten tech units were involved into the settlement of the situation. And now some funny and nostalgic stuff! Old-fashioned Pepsi-Cola was found in one Russian supermarket! Price – about $2! So cool that such bottle may be bought even today!