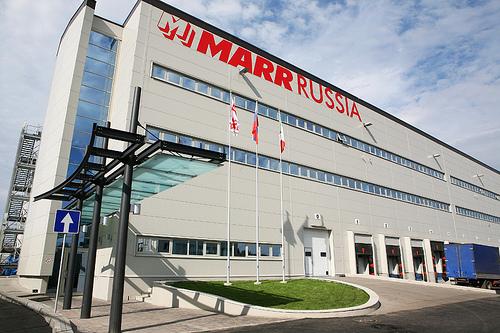 Perhaps, as long as fast food exists so much time we argue about its harm to our health. We could see many accusatory TV programms and read dozens of books and articles about it.

In their turn, representatives of fast food networks do their best to rehabilitate themselves in all possible ways adding various salads, yoghurt and fruits to their menues. They print information about food energy and convince us of innocence of their wonderful burgers. Lately they have increasingly invited journalists and bloggers to watch fast food production in order they could see themselves that their rolls are the best in the whole world and there is nothing in their cutlets but 100% meat.

This time we are invited to the Italian enterprise MARR RUSSIA where they produce beef cutlets for McDonalds’s restaurants in Russia.

Before entering all employees have to remove their rings, bracelets and watches and put them in special mini-lock boxes. They have two production halls that are not so huge as you could imagine. Two conveyors for meat – the first one for fresh Russian meat, the second – for foreign frozen one. Russian meat is not so fat as the foreign one (8% fat), that’s why they have to combine them to achieve 20% fatness. Minced meat is waiting for its turn to be taken to another machine that will make cutlets from it. Main words of the production are “safety” and “qualty”. Temperature of the minced meat shouldn’t rise too much, so they use special device to control it. And here are the cutlets for all Russia! 29 thoughts on “Secrets of McDonald’s Beef”