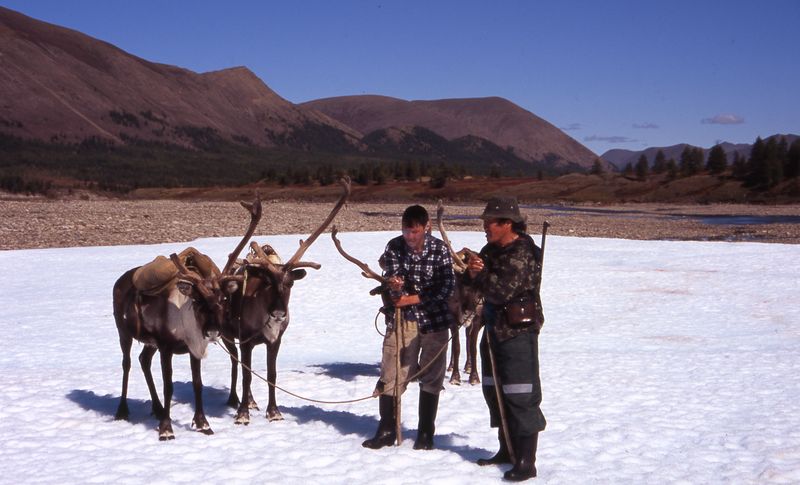 What do most of us know about Eveni and Evenki? Nearly nothing! Today we are going to pay a visit to the central and eastern parts of Siberia to have a closer look at people who live there.

A hut in Yuchugei. It was built in the Soviet time as an experimental one, applying a special technology – the hut had to warm itself. It has no stove or any other heaters except the electrical one. And it’s in the coldest place of the northern hemisphere of our planet! In winter snow and ice do not melt a meter from the floor in the hut. They always wear warm clothes inside. The village has several huts like this.

They do not cook national food anymore, have grown lazy and now prefer to buy concentrated products. Only one granny, aged 65, tries to keep up the traditions and still make national clothing of buck skin. Most of Eveni and Evenki, both yound and old, like to booze, it is hard to meet abstainers here. Only few speak the Even language, most of them already speak Russian or Yakut. A good granary made of hard wood. Inside are flour, rice, macaroni… Another stand on the way and another type of granary – on the poles. On the top are tarpaulined utensils and boxes with books and magazines. Some kind of library for a long winter. Next to the granary are a trap to frighten bears, a galvanized washboard. Some meters away are totem poles decorated with horns and a carved tether for deer. One of the reindeer breeders. A husky puppy, the thing you see on his neck weans a young and yet silly dog to chase deer. A sheeting for shelter and a tent of skins. Inside of the tent are a hearth and a summer kitchen. Some deers are trained for goods transportation, others are used for riding. In the evening they usually “have tea”. The evening “tea” means a huge pan with fried meat and many bannocks. Most of them have poignant mind and like to make fun of strangers. A radio station to communicate with workers and a dispatcher in Yuchugei. It’s amazing but some of them attain the age of more than 100 years. The favourite amusement is to watch slopes in binoculars. It’s interesting to watch the mode of Eveni’s life, they live in full harmony with nature. Modern scientists believe that they could have common ancestors with Red Indians. After the rut deer gather in one place to move to another nomad camp. Meat is usually packed up in sacks and put in a cold sream under a zinc tub – an idea substitutes a fridge. It’s almost impossible to travel incognito here. They always know if there is a stranger in their areas. Eveni and Evenki live a natural, sincere and plain life. They don’t feel they lack something that we all can’t do without. When you watch their life you clearly understand that no “comforts” are worth your life to be wasted, changing them for money or other socially dictated values,  unwittingly and inevitably finding ourselves in the vicious circle. 9 thoughts on “Evenki of the Verkhoyansk Mountains”