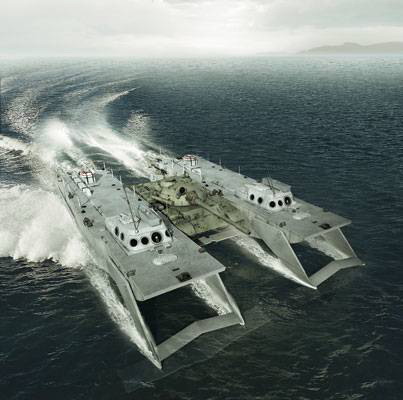 In 1951, when the Soviet Union was on its high, authorities had an idea of building special floatation devices for tanks. First sample workpieces for T-54 tank were made at in 1952, and, some several weeks later tests were carried out on the Oka river. In the next two years trial test at the sea were conducted. And in 1957, eventually, the floatation device was passed into service.

There were supposed to be as many as 187 (according to the amount of tanks) floatation devices on the strength of the motor rifle division. PST-U consisted of five pontoons that were filled with plastic foam. Total weight of the device was 10 tonnes. Buoyancy reserve (with T-54 tank) was 40%. Maximum speed of tank with the floating device was 19 km/h ashore and 12 km/h afloat. The floating device was equipped with its own fuel tanks with a capacity of 500 litres; equal to coverage of 60-80 kilometers distance without any tankâ€™s fuel consumption.

Water obstacles traverse could be done with sea disturbance of 5 points and tank gunnery with 1.5 points. Together with tank it was possible to carry a landing troops crew of 25 people (40 for 3SU-57-2) though gunnery with the crew aboard was prohibited. A floatation device mounting could be carried out in as less as 35 minutes and its release was performed in no time at all. PST-54 floatation device was carried by four ZIS-151 trucks.

In 1962 there were test of light-weighted floatation device PS-1 for T-55 carried out. Its total weight was 5.5 tonnes, its maximum speed was 13.7 km/h afloat and 25 km/h aground while it could cover up to 100 kilometers. The floatation device was carried by two trucks.

After it lots of new tests were performed and many different upgraded kinds of floatation devices (some of them for heavy tanks) were constructed. In the end of 1950â€™s there was engineering of high-velocity landing floatation devices with underwater wings commenced. The floatation device comprised two motor boats (with displacement of 12 tonnes each) which helped to boost speed of a waterborne vehicle to 30 knots. Every motor boat had engine with 1000 hp/h. First prototypes were made in 1961. In 1967-1968 two production prototypes passed tests and mass production began. The Baltic and the Black Sea region battalions were equipped with these floatation devices right away.

Photo and story via savoysky

12 thoughts on “Tank or a Waterborne Vehicle?”