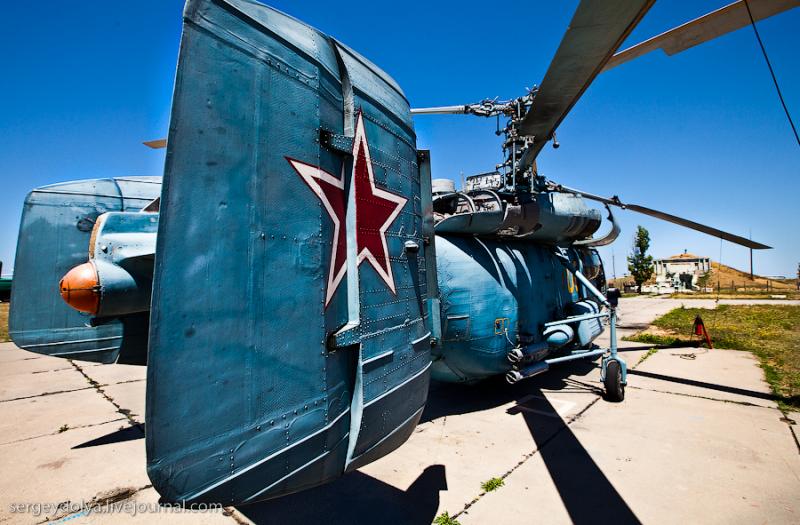 Kacha is not only aircraft but helicopters as well. Over here, in Crimea, such sorts of aircraft as search-and-rescue KA-27PS helicopters, antisubmarine KA-27PL and multipurpose MI-8 ones. Amount of stars on the door states how many war missions a helicopter underwent. A dashboard looks not like in the other helicopters. There are some bags with warm clothes in the salon which are being delivered to a ship in distress. Next chopper is KA-27PL, where ‘PL’ in Russian means ‘antisubmarine.’ They are kinda look-alike with its buddy KA-27PS and only radiolocator shell gives it away. Like in BE-12 from the first post it has a radiodetector to seek a would-be aggressor out. There is a special winch fixed up in the cabin which douses a radio sounding device into the water at a depth of 150 meters (500 feet.) With the help of the device a soundman detects a submarine. A radio sounding device itself. Apart from KA series helicopters there are some MI-8 located at the base. Inside of the cabin of MI-8 adjusted an extra fuel tank. At full load the helicopter can carry 26 people. MI-8 helicopters are much roomier than their counterparts, KA-series choppers. Lots of helicopterists have their own modern GPS navigators set up for a better route control. And as a final titbit there are some shots of the town of Kacha where the base is located. Photos and story via sergeydolya