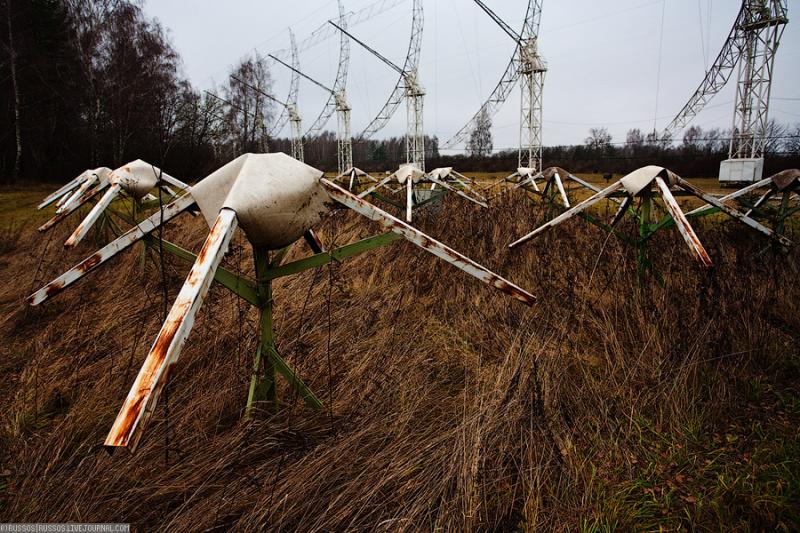 Puschino Radioastronomical Observatory is the oldest Russia’s scientific establishment that is engaged in radioastronomic research. It was established on 11 April, 1956, when the authorities gave permission to build the institution and fix up a radio telescope on its area.

Currently there are 2,5 radio telescopes (one of them only with its East-West axes working) operating at the observatory: RT-22 FIAN, DKR-1000 and BSA FIAN. On the header image you can see an experimental telescope. These things are dotted around the whole area of the observatory and wired up together. RT-22 against the background of the antenna array. And now let’s get down to a classic radio telescope – RT-22. A main pod with equipment inside. Altogether this giant weights more than 450 tonnes with diameter of the dish more than 22 meters (73 feet.) A hardware room. Device that stays at the center shows bearing and elevation angles of the telescope. That’s the place where the telescope’s control is maintained; to the left sits a usual control system-backed IBM PC. Base of the telescope is a 152-mm turret barbette of a half-constructed and later, in the 1950’s, dismantled armoured cruiser. The last of-this-kind-survived cruisers is ‘Mikhail Kutuzov’ that is kept in Novosibirsk as a museum. These are data cables by which sensed and then compressed to 200MHz signal is transmitted to the hardware room. Cables are just one-turn long and then you need to spin the telescope away again, but that doesn’t bother anybody; the principal direction is south side one. But it is whispered among conservatory employees that once there was a student in training who spin the microscope too strong and torn the best part of cables. One month on a renewal and, of course, fixing a limiter. But barbette itself has a real air of cruiser inside – rivets, inch-thick metal walls and a silent squeeze. A motor that spins the telescope according to bearing. Another room which is located on the telescope mount with secondary equipment inside. Do you know how astronomers over here call telescopes? Tools! Here you can see a tool with dish diameter of 22 meters (73 feet.) RadioAstron project’s launch is scheduled on June 21, 2010; soon enough, it is. A 10 meter long (33 feet) space radio telescope is supposed to be launched into the Earth orbit and left there for lots and lots of years (and maybe not) to go to explore the outer space far and wide. Story and photos via russos