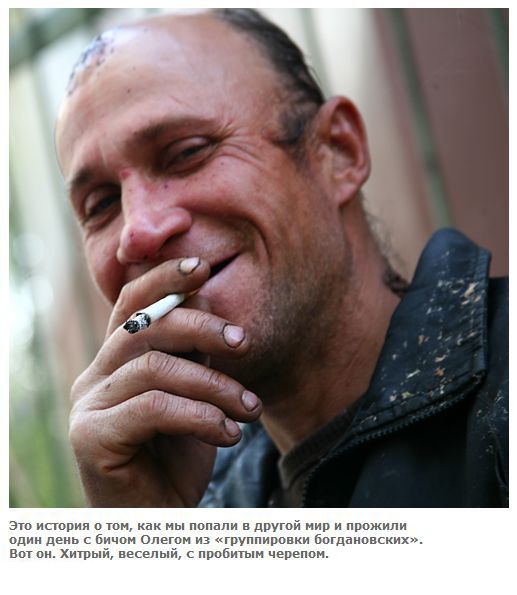 The story you’re going to learn now is not a commonplace one. This is the story of a one-day-long journey to the other world that is full of filth, grime and foulness. But in spite of all these dirty things, this world is our world too.

This is an insight on how bums of Novosibirsk live, spend their free time, entertain themselves and occasionally partying. Our humble guide for today is bum Oleg of “Bogdanovskie” gang. There he is. A sly and lively man with his head cracked.

Commencement of the journey: a flophouse that works on a paying basis (2500 roubles / 75 dollars a month.) 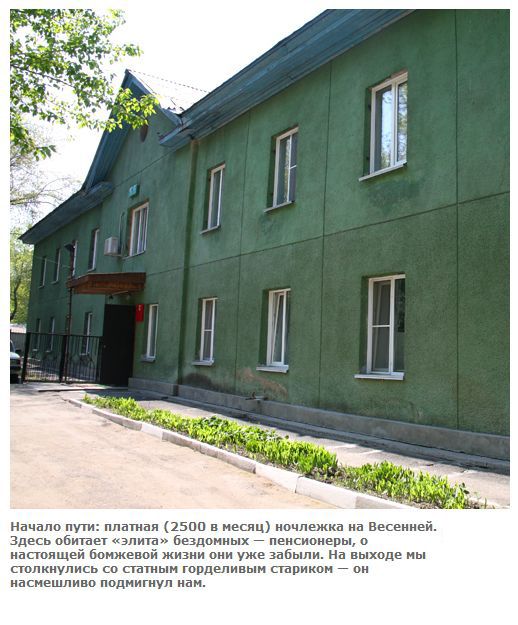 That’s where crème de la crème of homeless people sleep over. Only some pensioners stay at the place, and, for sure, they have already long forgotten what it is like to be on the bum.

Then the travelers’ crew met a haughty and prideful needy named Serega. “I’m a loner and always decide for myself,” he said. Even when the guys offered him 300 roubles (10 bucks) to show them around the city’s streeters life he refused the money. 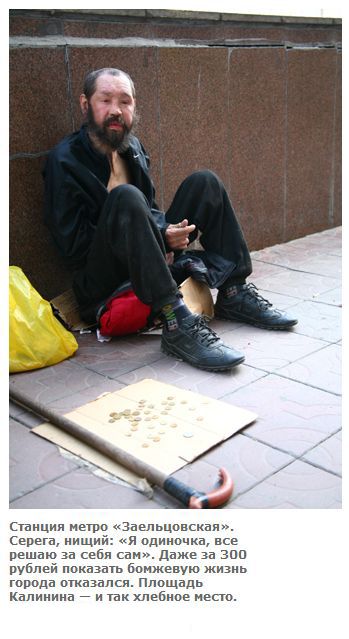 At the flophouse the team were told that there was a bums’ settlement in one of the city’s hoods. Now their path goes to a dump site near a local private sector (it is popularly dubbed Shanghai and is like Novosibirsk Harlem.) 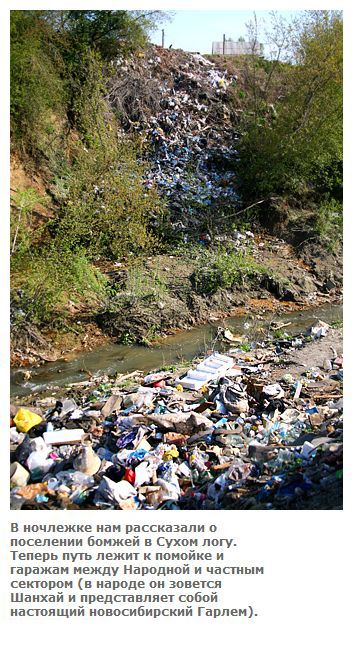 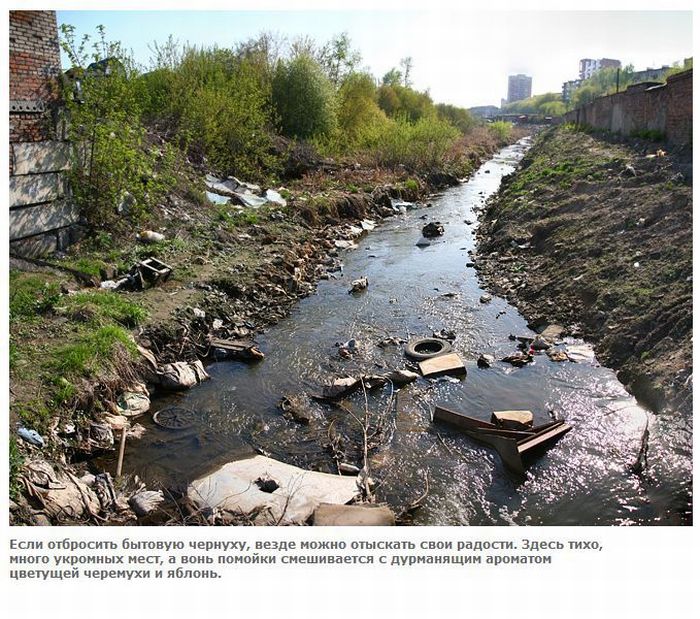 Continuation of the trip: Interesting things begin popping up 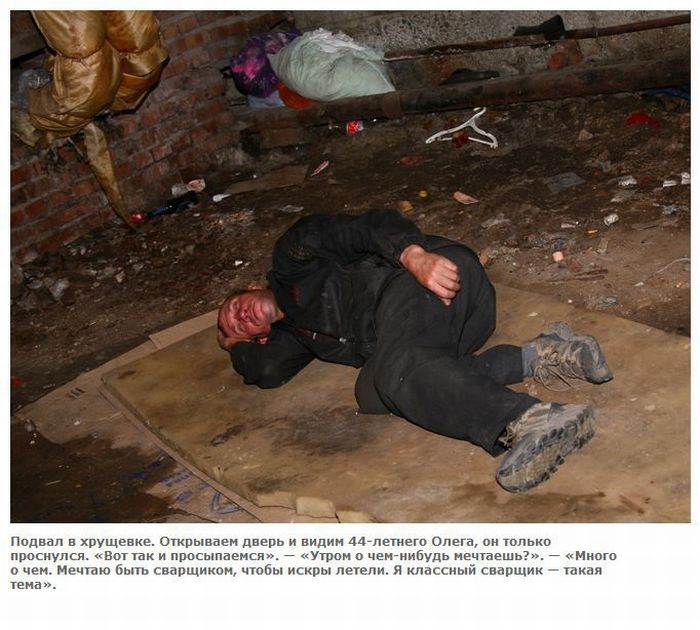 Basement of a “Khruschevka” building. You open the door and see 44 years old Oleg who have just woke up. In the mornings he dreams about being a welder. 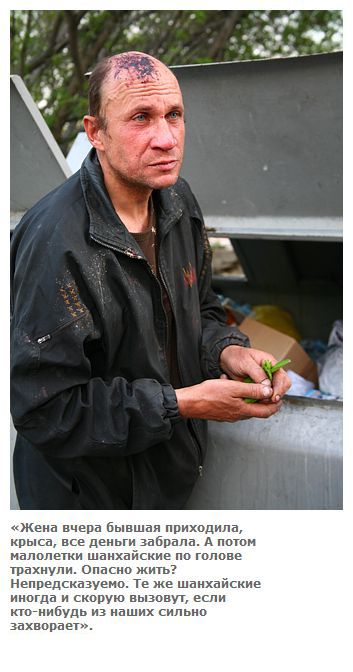 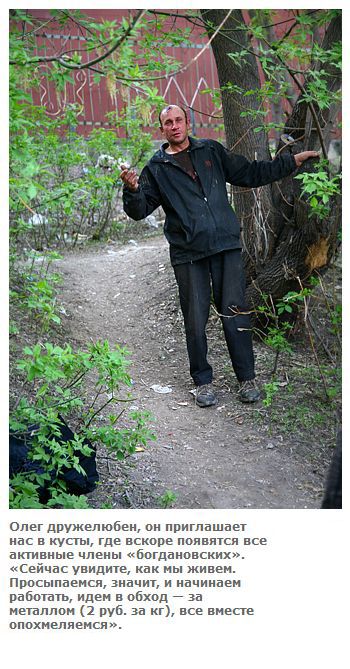 Oleg is a friendly guy and right away asks the crew to follow him to the bushes where all active members of the “Bogdanovskie” community will be soon gathered. “You’ll see how we live. At first we wake up and begin working. Go round the place to gather some metal junk (2 roubles for a kilo / 7 cents for 2 lb) and then nurse the hangover together.” 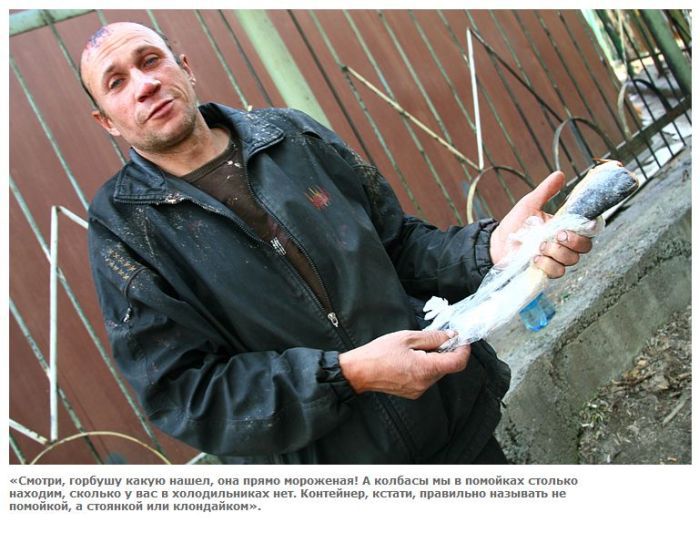 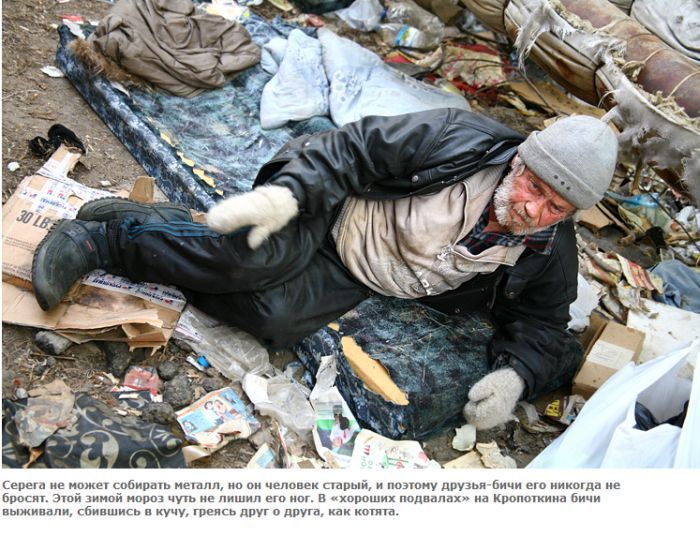 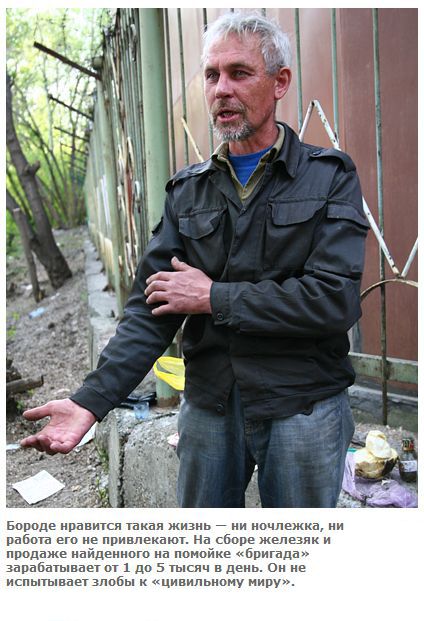 “Beard” likes this kind of life – neither living in the flophouse nor getting a job attracts him. He earns 1-5 thousand roubles a day (30-150 dollars) just for gathering scrap metal and doesn’t detest people living “on the other side.” 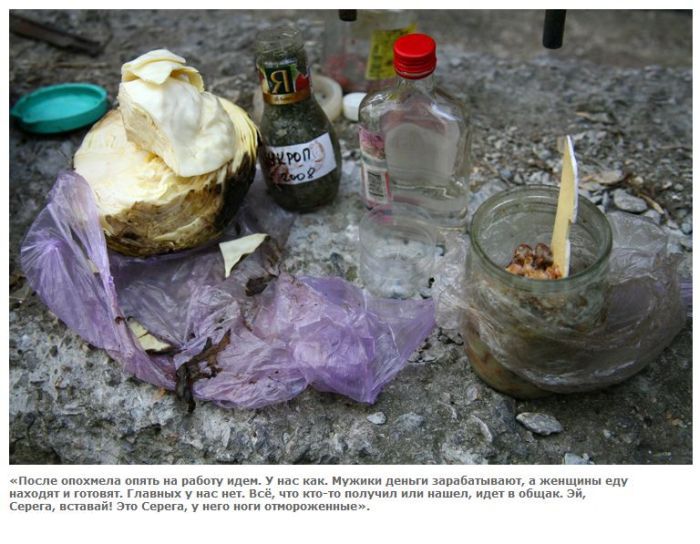 After freshening the nip they are supposed to be working again. “That’s how it goes. Blocks are earning money and women are looking for something eatable, and then cook it. There are no major or minors. Everything that is either found or earned goes to the shared fund.” 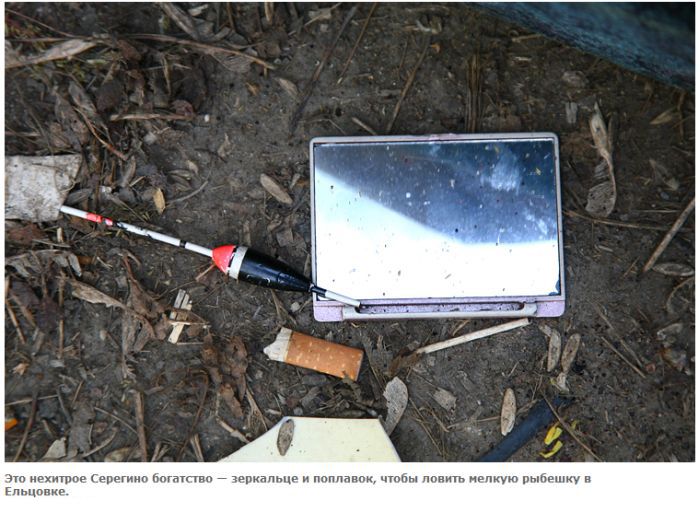 These plain Serega’s riches are a small mirror and a float for catching small fry in the local river. 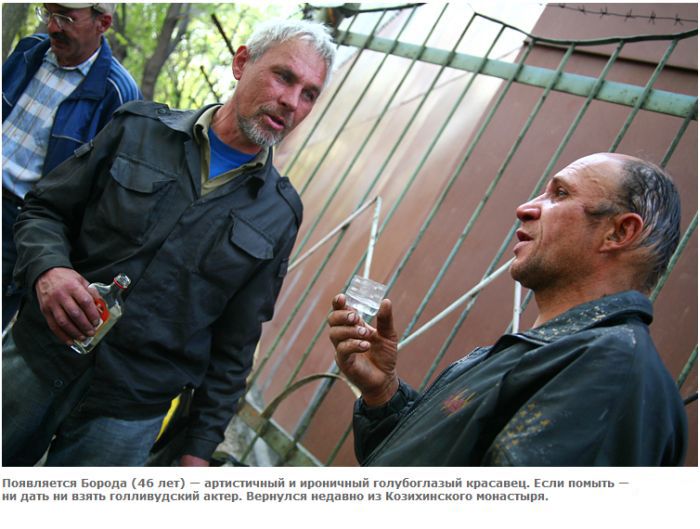 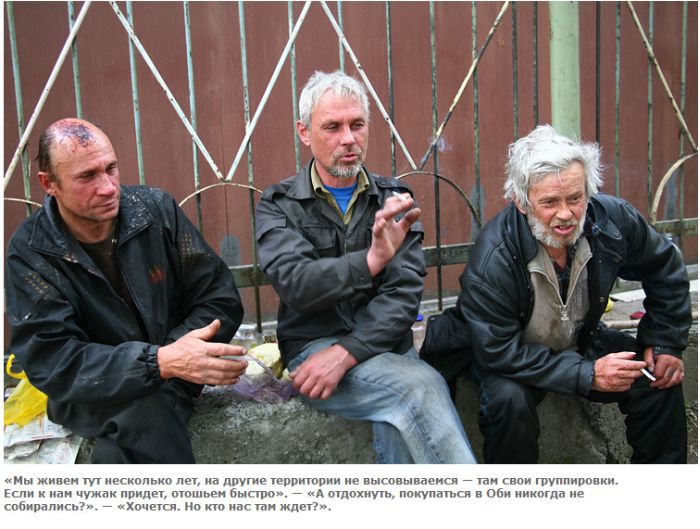 “We live here already for several years and keep our heads down. Alien places have alien people in there.” 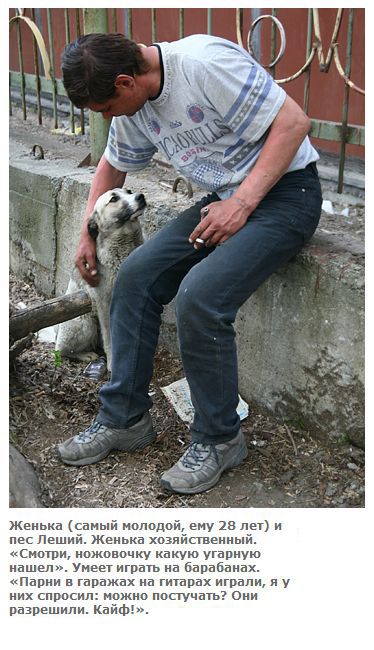 Eugene (the youngest one, 28 years old) and a dog Leshiy. Eugene is a thrifty guy and likes drumming. 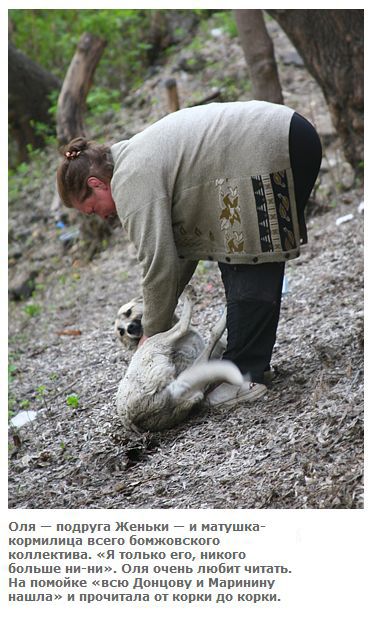 Olga – Eugene’s friend and a matron of the whole community – fancies reading. All books she is able to find among garbage are read from title-page to colophon. 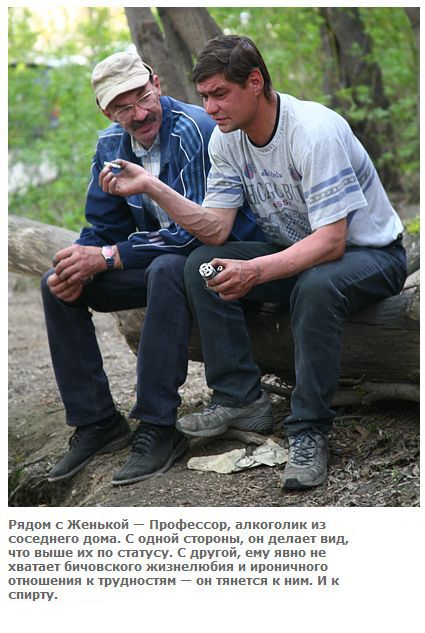 Next to Eugene is Professor, a drunkard from the next door. He tries to look more superior than the rest of them, but, actually, it is clearly seen that he lacks for their zest for life and dryly look at difficulties that life thrusts upon them – he strains after it. As well as after vodka. 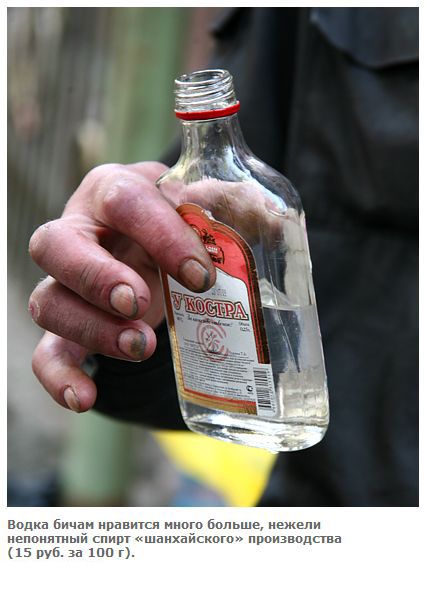 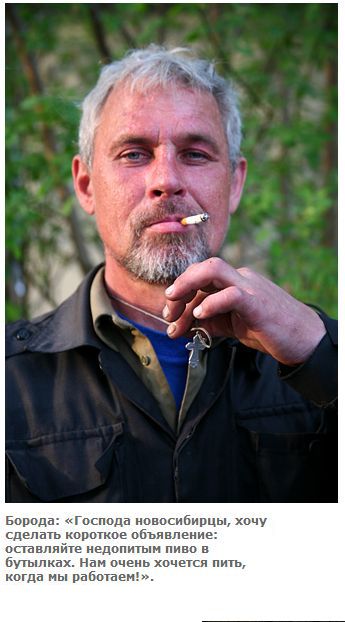 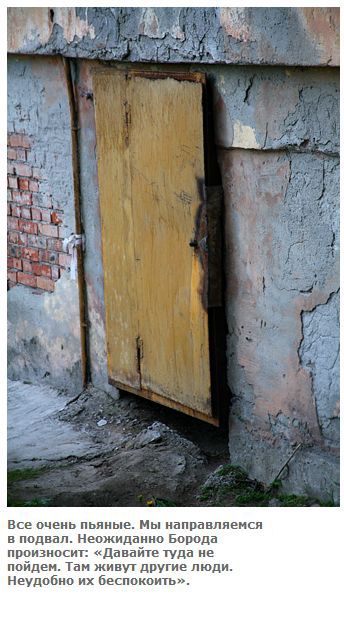 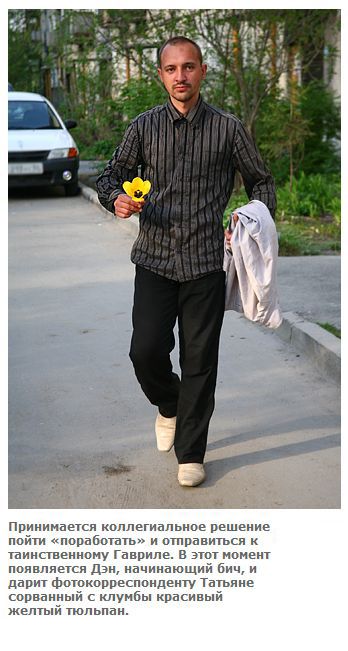 Then, as if out of nowhere, Dennis, a rookie with a flower plunked from the flower-bed, turns up and hands it to the photographer, Tatiana. 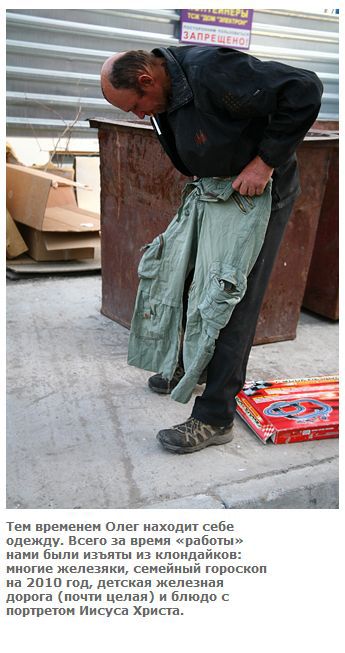 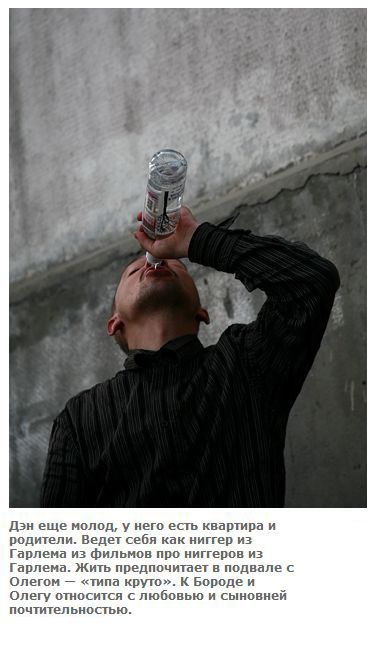 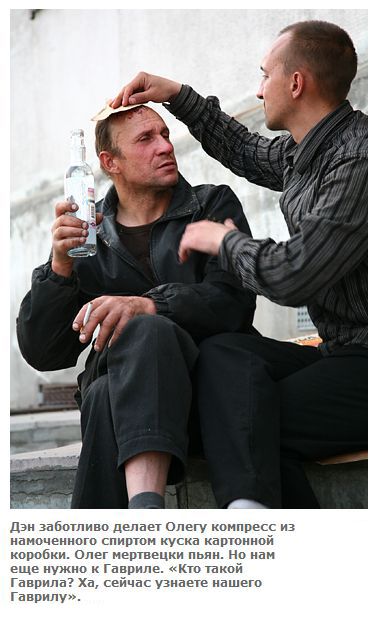 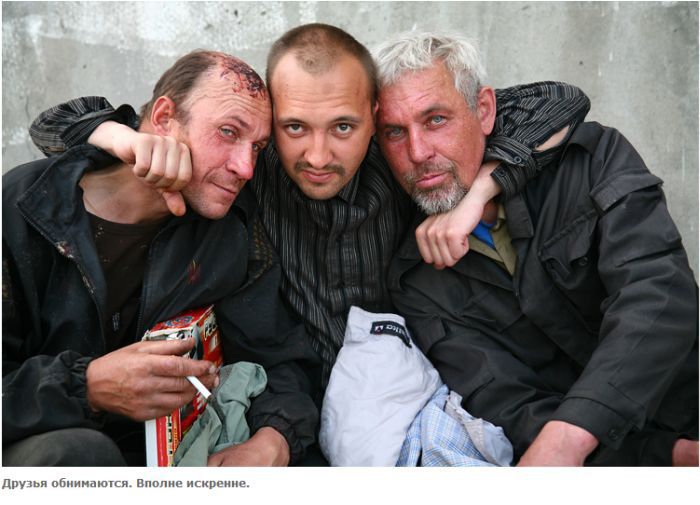 Dennis is still young and has an apartment of his own and parents to look for. But, odd as it may seem, he prefers to be on the bum and live in a basement with Oleg to ordinary life. Seems cooler for him. For Beard and Oleg he has the greatest respect and childlike reverence. 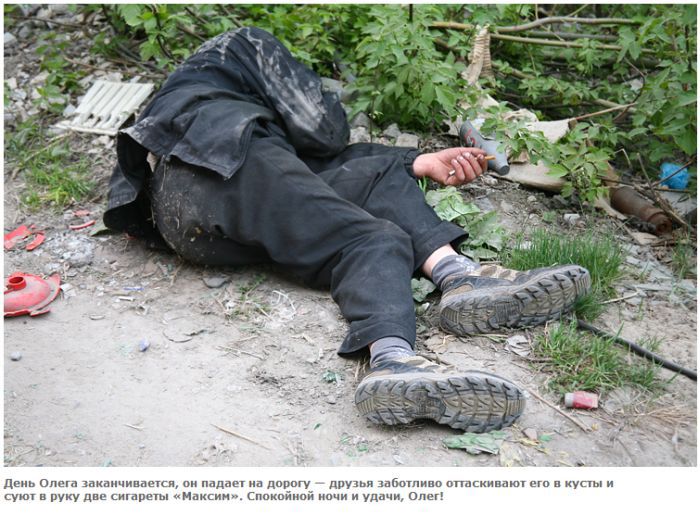 Oleg’s day is over as he falls to the ground. His friends are carefully pushing him aside and sticking two cigarettes in his hands. Good night and good luck to you, Oleg! 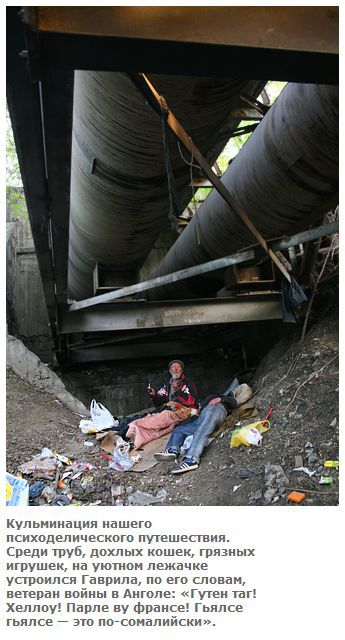 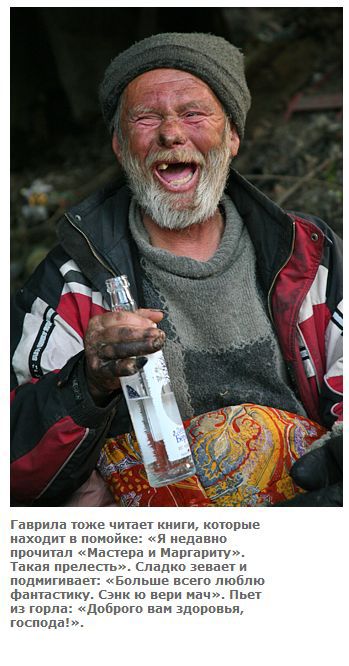 Among pipes, dead cats and filthy toys, there is Gavrila on a cozy mattress. According to his words, he is an Angolan war veteran. He also likes reading, not so long ago he’s read “The Master and Margarita”. “Such a nice book,” he says. Gives a soft yawn and winks at the crew: “Most of all I like sci-fi. Senk ju veri match.” Drinks straight from the bottle: “Cheers, my friends!”

28 thoughts on “Life in the Gutter”